I wasn't sure about this.  It was on the afternoon of the last day of the cruise; the alternative was exploring Budapest.  But my sister likes horses, and I thought, at least I can get her some photos.  So I signed up, and after an hour bus ride arrived at Lázár Lovaspark – that's the Lázár Equestrian Park to you English speakers.  The link is to the English language site.

Here is the link to my photo gallery, Hungarian Horse Show.  For every photo I show here, there are more there of the same subject; in fact, this will be the first of two posts on this.

Let's be clear:  this is not some fake to amuse the tourists.  This is a working, competing stable which also does demonstrations.  The owners are brothers, Lázár Vilmos and Lázár  Zoltán.  They compete in international four-in-hand driving competitions:

One of the owners' family, they told us, holds the world record for maximum number of horses driven at one time – eighteen!  Having some background with horses, I asked how in hell they harnessed eighteen horses together – in four spans of four across, I was told, with the two extras at the back, in front of the wagon.  Yow.  So naturally the first thing we got was a demonstration of four-in-hand driving: They also had a pony wagon with four white Welsh ponies harnessed.  And all these teams came by at pretty close to a full gallop.

After the four-in-hand teams, we got a demonstration of Mongol horseback riding:

You notice he is riding with a saddle and stirrups.  He is also riding at pretty much a full gallop, as you can see from this and the other photos.  He either fired arrows or threw javelins at targets on each pass, and while he never hit a bullseye, he never missed a target, either.

The announcer kept referring to them as "cheeKOI", or something that sounded like that.  I don't speak Hungarian.  When I got home I Googled "Hungarian cowboys Budapest" and the top two references were videos on "Csikos cowboys," who looked exactly like these dudes.  So I assume that's how you pronounce that word in Hungarian.

The announcer said they were/are Hungarian horsemen, who originally (we're talking several centuries ago here) worked for the local king, but fell out with the Hapsburgs at some point and moved into an outlaw life.  If you're interested in a more formal description, do that Google search and read and watch the first two hits.  To go on about the outlaw life:  apparently when they lived on the plains of Hungary (much of which is very flat), they sometimes had to hide.  How do you hide a man on horseback in tall grass?  You teach the horse to lie down, with the man still on its back: These horses were incredibly well trained.  It's a very trusting and confident horse that lets the rider do this: 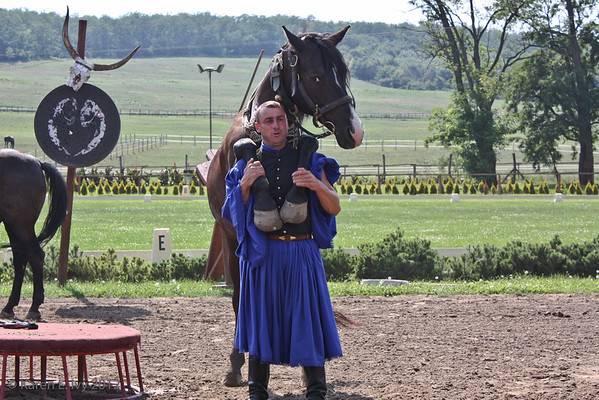 I don't remember taking this last photo and I still don't believe it.

Finally, to demonstrate their skill, they all galloped by carrying full steins of beer, which they didn't spill: The announcer told us that man and horse are a team, they never swap horses. They do use multiple horses, sometimes.  After the Csikos exhibition, this guy came out. although by his costume he's still one of them.  Yes, he is in fact standing on the rumps of the two rear horses and driving three more horses ahead of him in what the Russians would call a troika.  The announcer said this was used by Magyar post riders. And I'm going to close this post on this exciting little scene, and do a second post for the rest of the afternoon!