Monday the 17th was the first full day of the cruise and the first shore excursion.  We docked around 8 AM, and right after breakfast we went ashore at Kinderdijk, a small village of 19 traditional Dutch windmills, dating from as early as the 14th century.  Kinderdijk is located on a strip of land between the Lek and Noord rivers and is a UNESCO World Heritage Site.  Here was my first view of Kinderdijk:

If you'd like to see the whole gallery, it's at this link.

I had forgotten why the Dutch built windmills.  They weren't grain mills, or only incidentally grain mills.  They pumped water out of the polders or reclaimed lands, using a system of dikes to control the water.  All these windmills are in working order and a local ordinance requires the families who live in them to maintain and run them.  Much of this part of the Netherlands is below sea level.  If you're interested in more background, just Google "Kinderdijk"; the best background is probably the UNESCO site.

The actual pumping today is done by electric pumps.  I was charmed to find that the electric pumps are actually Archimidean screws:

This was probably the most peaceful shore excursion we had.  There was no guided tour; we just had a deadline to be back at the ship because it was leaving at 11.  It was raining when we started but the rain didn't last.  We could tour one of the windmills and walk along the dike, flanked by water on both sides. It was incredibly pretty:

Being mechanically inclined, I really enjoyed touring the windmill.  The living space is, um, compact: I didn't get a photo because the light was poor and there wasn't room; but the family sleeps in wall beds, literally a closet with doors that shut, and a raised floor with a mattress on it.  I assume this is to keep warm; it did seem a little claustrophobic.  Here is the windmill mechanism, right in the middle of where everybody lives:

On these windmills, nothing moves as long as the sails are down.  If you look at the first photo again, you'll see that all the mill blades look like openwork; they are openwork, like a trellis.  When the owner wants it to do work, he spreads canvas sails on the trellis blades so the mill blades can catch the wind.  Here's the demonstration mill with the sails up: 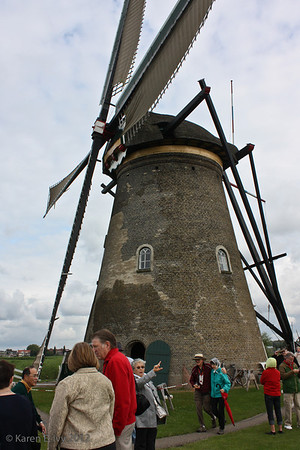 You can see that the blades are solid now.  The wind was blowing enough to move them and the power those blades generated was amazing and frightening.  The miller had roped off the area the blades sweep through, and with good reason.

You can also see all the bracing on the other side of the structure, to keep the blades from pulling the whole thing over.

After touring the mill, I just wandered along the dike taking photos. I saw one bird that I simply can't identify.  He hovered exactly like a hummingbird but he's much bigger – having seen him, I guess that wingspan at 15 inches, and the rest of the bird in proportion.  If you can help me identify this guy, please post.

Here he is in a different pose: Down the dike and around the corner there was another whole row of windmills along a watercourse: It was a lovely peaceful walk, ending with ducks sitting on a little dock:

But eventually we had to walk back to the boat and leave.  I didn't take many photos of this section of the trip, as it was pretty industrial.  I don't think photos of gravel plants and chemical works are edifying, although some may disagree.  Perhaps I should have taken a photo of the National Dredging Museum in Sliedrecht, but I didn't.  Besides, it rained steadily the rest of the day, which made the sun deck uninviting.  I did, however, take a picture of this, rain or no:

If you think that looks like a replica of Noah's Ark, you're right – that's exactly what it is.  It's in Dordrecht, and it actually opened to the public in July 2012!

And that's life on the river – brief excursions to walk around and take photos, interspersed with long periods of just floating down the river, watching the banks go by.  We were supposed to have a safety drill that first day – on the sun deck.  Remember I said it was raining?  Yeah.  The safety drill (mainly to make sure you knew where the life vests were and how to put them on) moved to the lounge and was somewhat abbreviated.  The scheduled game of shuffleboard actually did take place on the sun deck – Jim played with two other people, he said it was just mizzling a little.  Occasionally the program director made comments over the PA system about the spot we were passing.  Cocktail hour at 5:30, a daily briefing in the lounge at 6:45 to tell us what will happen tomorrow, and dinner at 7:00, usually followed by some sort of talk at 9:00 or so.

This being the first day, we all drank a "welcome toast" (orange juice available) with the captain and hotel manager, at which point I learned that the Captain's name is very misleading:  Anne-Jacob Sijbranda is probably 6' 4" tall with a full black beard.  Click the link for a photo of him in the wheelhouse of the Viking Neptune, an earlier assignment.

This entry was posted in Personal, Photography, Vacations and tagged 2012 Vacation, Birds. Bookmark the permalink.