What with our trips to England and Wales, and now to the Netherlands, Germany, Austria, Slovakia, and Hungary, I've seen a few cathedrals.  So far, the Dom in Cologne is the most vertical cathedral I've seen.  The immediate visual impression is of something huge, pointing up.  Well, it is huge; it is the largest Gothic church in Northern Europe and has the second-tallest spires and largest facade of any church in the world.  And because the rest of Cologne is wrapped right around it, it's virtually impossible to get far enough away to get a decent photo of the entire building.  So I have a lot of detail shots.  The photos of the Dom are in the gallery Cologne Cathedral, I'll just show a few here.

Here's the south side of the Dom, including the little square next to it, with neighboring building.  This was how we approached it the first time. 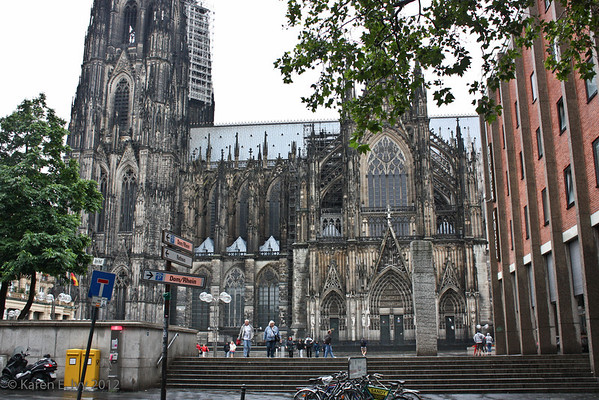 Yes, it was still overcast.  We didn't have a sunny day till we hit the mittelRhein.

As far as I can tell, almost no one refers to the building as "the Cathedral," or even as "St. Petrus" (the official name).  It is The Dom.  Wikipedia says blandly that "Construction of Cologne Cathedral commenced in 1248 but was halted in 1473, leaving it unfinished."  Our guide was a little more forthright.  They built the cathedral as long as the money was good, but in 1473 work stopped, with the construction crane still sitting on top of what was to be the south tower, and the Dom sat unfinished until the 1840s.  (The construction crane stayed there for 400 years!)  I haven't been able to identify any specific reason why money was suddenly short in Cologne, but the Hanseatic League was falling on hard times in the late 15th century, from which it never really recovered, so I'm assuming that was part of it.

The area came under Prussian control in 1815, in the negotiations following the Napoleonic Wars, and in 1842 the Prussian court decided to support a project to build the towers to the medieval blueprints, which had been rediscovered.  The bells were installed in the 1870s, and the completed cathedral was celebrated in August 1880.

Energetic visitors can climb the 509 stone steps to a viewing platform in the towers.  Jim climbed it.  I didn't.  This is a life-sized replica of the finials on top of the towers.  Observe the people for scale.

This is the nave or central aisle of the Dom, which is cruciform like most medieval churches. If you look very closely, you can see a little gold triangle in the center at the bottom.  This is the Shrine of the Three Kings, which sits on the black marble High Altar.  The Shrine was commissioned at the end of the 12th century; in fact, it was commissioned and built nearly 50 years before they began to build the cathedral.  It is reputed to contain the relics of the Three Wise Men (yes, those three wise men), which were supposedly acquired by Frederick Barbarossa at the conquest of Milan in 1164.  I tried to get good photos of the reliquary, which is quite beautiful, but between the dim light in the cathedral and the fact that the shrine was behind both bars and glass, this was the best shot I could get:

One of the fascinating things about medieval churches is the people who were buried in them.  The richer and more influential you were, the nicer monument you got.  I can't claim to have seen everything in the Dom, but I only remember one tomb with an effigy for a secular figure, a knight called Gottfried IV, Graf von Arnsburg, who died in February 1371.  I assume the effigy is fragile, as it is surrounded by an iron cage, and his actual remains are in the pedestal tomb.  The effigy was about at my waist height.

If you want a better look at his armor, I found a site showing a photo without the cage.

No one is really sure what the symbolism on medieval effigies meant, and much of the meaning I know about comes from England; but here are my guesses on this effigy:  He was not a crusader, because his feet were not crossed. (Okay, the Ninth and last crusade ended in 1272.)  Since his sword is sheathed, he probably didn't die in battle.  The dogs at his feet probably represent fidelity.  There is an extensive and interesting discussion of dogs at the feet of effigies, and other symbolism, on the site RootsChat.

I photographed one more memorial to a knight, a beautiful floor mosaic.  I couldn't read the lettering to see who it was. 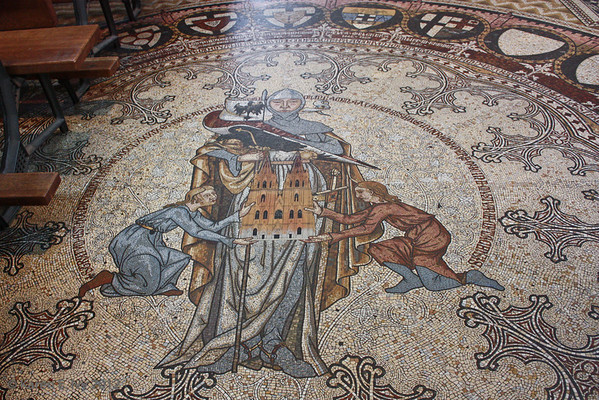 The Dom also had some beautiful painted statuary, which is how the Middle Ages liked their statues.  I especially liked the St. Christopher statue: 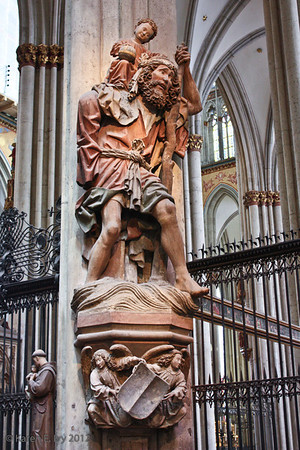 There were, of course, several tombs of deceased archbishops, complete with decorous effigies; and then there was this guy.  I wondered about a bishop who would be memorialized like this, but it turns out he isn't a bishop, and this isn't his tomb.  A photo I found in Flickr says this is "A tomb with effigy of St Engelbert, reclining and dressed as a bishop, with a putto at his feet. Created in 1665 by the Cologne sculptor Heribert Neuss."  I didn't think it looked medieval. I still don't know who's in the tomb.  St. Englebert of Cologne was an interesting guy, who was excommunicated (for fighting the wrong bishop), then later reinstated and elected archbishop of Cologne in 1216. Don't miss the stained glass windows, I got several shots of stunning glass work.  These are really better seen in full screen at the SmugMug site. I want to close with a few gargoyles, from the north facade.  Most of these were fairly close to the ground.  I'll just show a couple but there are 8 gargoyle shots at the end of the gallery and the range of images is amazing.  And remember:  these are drain spouts.  This guy is pretty standard (with pigeon): This looks like something out of a dystopian science fiction novel.

And who are these women?  Are they carrying a water jug, and is that the spout?

I hope you've enjoyed our tour.