Our tour of Miltenberg, a beautifully preserved medieval village on a bend of the Main, began about 15 minutes late, not bad considering how much time we lost getting through the locks.  Here’s part of Miltenberg, showing the remains of the castle.  Our travel notes suggest that Miltenberg was pretty well settled here by about 1379.  It’s located in what’s called the “Main Square” or Mainviereck, where the river, in about 80 kilometers, makes two right angle bends.  Miltenberg is on the first bend, a very strategic spot for collecting tolls.

It still contains an inn that’s been in continual service since the 14th century and is the oldest pub in Germany.  They also note that Miltenberg flooded a lot over the years – you can see how it might.

Cologne may have been bombed flat and reconstructed, but the Allies don’t appear to have done Miltenberg any significant damage.  We toured the town you see, on the right bank (as we went upstream); Miltenberg now occupies both banks and has a population of about 10,000.

This is Franconia, which is part of Bavaria – which means it’s mainly Catholic.  We saw numerous buildings with really beautifully painted religious icons mounted on the outside of the facade, here’s a lovely Holy Family: As usual, my gallery Main, Miltenberg and Wertheim has more photos of the town and of the locks I discussed in the last post.

There were some newer buildings, but a lot of the village is still pretty half-timbered and crowded together.  Here’s the old central square with fountain: The old town is mainly between the two towers, the Mainz Gate or Mainzer Tor and bridge: This wasn’t the best tour guide we had, but the town was interesting.  Ten minutes apart on foot, you had this very modern and charming street fountain, and the oldest pub in Germany, the Hotel zum Reisen: Here’s the hotel’s sign, which I thought was charming: After the official tour, Jim and I climbed up to the castle walls, above the town – a pretty steep climb. 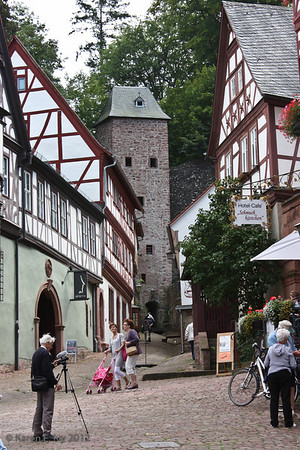 We were standing on the ramparts looking over the town when, incredibly, we heard wind instruments (sounded like shawms and sackbuts) play a very short fanfare – Jim thinks it was 17th century, I thought and think that it was earlier, maybe 16th, but since it lasted less than a minute it’s hard to say.  But the effect was magical.  (I later learned that the local museum had just earned an award, and there was a ceremony honoring it in the old castle yard, and that’s probably where the fanfare came from.  But that’s hindsight.  The experience was amazing.)  Here’s the view from the walls: We all gathered again in the town square around 5:45 PM, and our tour director, a Hungarian lady named Timea Styt, herded us all back to the buses.  Here’s Timea, the only photo I got of her:

This was where the day began to get weird.  We boarded the buses and drove off to Wertheim where we were supposed to meet the Embla.  My diary says Embla left Miltenberg when we did, which makes no sense; it should have left when it dropped us off, and continued up to Wertheim.  When we arrived in Wertheim, Timea told us the boat was late (I told you they moved slowly) and we had half an hour, until 7 PM, to explore Wertheim and take photos of the castle: Wertheim is a pretty little town and I got some other nice photos, including a 15th century chapel of St. Killian, which I didn’t have time to explore:

Seven PM came and the boat was still not there, and no docks were available, and they were going to bring Embla alongside a boat that was docked and have us board through the boat.  They actually did that kind of boarding several times on the trip.  (I should note here that 7 PM is dinner time on the Embla.)  In the end, they maneuvered the ship up to a blank stretch of retaining wall along the river, and put out a very small boarding ramp (no more than 6 feet long), and we boarded over that, at pretty close to 7:30.  Dinner was 45 minutes late.  The crew met us at the door holding trays of candies.

I’m quite sure that was an illegal park. They could do this because of the boat’s engines – it had 4 propellers, each at one corner of the boat, each with its own independent electric motor with 360° of rotation; so if the captain wanted to move the boat straight sideways, he could do it, and he did.

We never did hear why the boat was late that day – communication from the ship’s management was always a little restricted – but I did give the crew points for improvisation.

1 Response to Miltenberg and Wertheim