Bamberg on the Regnitz

More delays in the blog, as we wrapped up the remodel, moved back in and unpacked everything.  Almost everything.  But I’m finally ready to go back to my vacation and consider our visit to Bamberg, the capital of the Holy Roman Empire under Emperor Heinrich II (that’s Henry to you) in 1007.  Yes, that’s over a thousand years ago.  Heinrich chose to build Bamberg on seven hills, like Rome, with a church on each hilltop. It was also laid out in a cross, a standard medieval city plan, with churches at the cardinal points.

What I noticed first about Bamberg, though, was the rivers.  This is the Altes Rathaus or old city hall, which is on an island surrounded on both sides by the Regnitz river.  As you can see from the eddies, the Regnitz carries a stiff current. If you think you see something sticking out at the bottom of the fresco, you do – it’s the leg of a cherub.  The painters and plasterers who built the fresco thought it was funny.  You can see closeups in my gallery on Bamberg.  There’s one up under the roof, too.  The bridge at the bottom is the Untere Brücke or Lower Bridge; I took the photo from the Upper Bridge.  Here is the Upper Bridge, taken from the Lower Bridge.   The force of the current is a little clearer here. 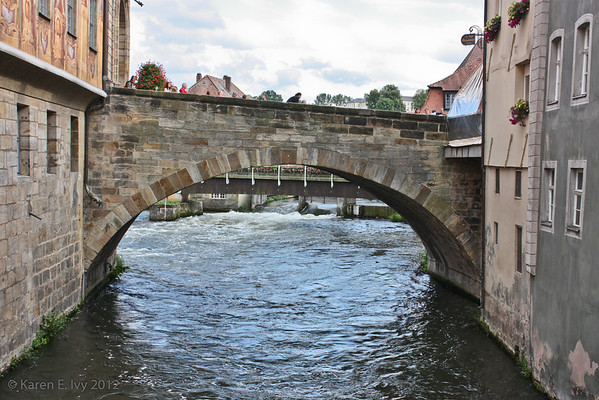 Near the Lower Bridge is this gilded statue of Queen Cunigonde, Henry II’s empress: The name is familiar to anyone who’s read Candide, or seen the Bernstein opera.  As far as I can tell it was a pretty common name in medieval Germany.

We spent most of our time in the old section, of course, but Bamberg has a more modern section too.  I like the decorative rooflines.  I notice most German towns don’t waste any space between their buildings. This elegant fellow is known as the Gabelmann or “Fork Man:” He is the landmark in the local Green Market, everybody meets “by the Gabelmann.”  We did too, this was where we were told to assemble after our free exploration time, following the usual guided tour.  We spent more time with the Gabelmann than we expected; I’ll get to that later.

Also just downstream of the Lower Bridge is a line of houses right on the river: The one at the right, with the arches right into the water, was once a slaughterhouse.  I don’t think we’d site one like that now.  I also wonder how all those houses did when the Regnitz flooded.  They’ve been there a long time, though – Bamberg is a UNESCO World Heritage site because it was not bombed in World War II and its medieval Old Town is intact.

I found the Leschen Brunnen interesting – a Brunnen is a fountain.  I don’t know what “Leschen” means. The sign, which isn’t very clear from this angle, says 1554.  For the non-German readers, “Kein Trinkwasser” means, “No drinking water.”  But I believe this was once a municipal well, you went down the steps with your bucket or jug to get fresh water.

We passed this memorial plaque, reminding people that Hegel lived here for a couple of years: There are some quieter sections of the Regnitz, and they even have gondoliers.  The riverfront is a very popular place. Since the Bamberg Dom was celebrating its 1,000th anniversary, I feel it deserves its own post.  I’ll close this one with an account of our misadventure in Bamberg.  We left the ship and boarded busses at 2:30 PM to come into town.  We had the usual guided tour, followed by the usual free exploration period.  They told us to meet at 6:30 by the Gabelmann (remember him?) to be bussed back to the ship for dinner at the usual 7:00 PM.  At 6:20 we were all sitting around, and Timea the tour director arrived with the news that the boat was queued at a lock.  It had 2 ships in line ahead of it.  (Remember The Day of Locks?)  There’s nothing to do and no place to sit at the port, so she suggested we hang out in Bamberg until 7:10, when the busses will take us back and they’ll have dinner ready when we get there.  Jim went off to explore the riverfront.  I sat under the Gabelmann and read Great Expectations on my smartphone.  (Yes, I did.  My feet hurt.)  Then she came back and said, go and wait in the busses; the lock has a problem.  We never found out what.  We eventually got off the busses in someone’s driveway, and walked down to board the ship at the edge of the lock approach.  That’s the captain leaning on the white support.

I was touched that the whole ship’s complement turned out on the deck to welcome us all back – I wasn’t the only one who took a picture. Here’s a better look at Captain Anne Jacob Sijbranda (yes, that is his name), in the red tie, he’s much taller than he looks when photographed from below: