The afternoon of June 22, we toured Nuremberg.  Nuremberg has quite a history, going back to the 11th century (see the linked Wikipedia article); but of course what we remember it for today is the huge Nazi rallies that were held there in the 1930s and 40s, and later the war crimes trials of the Nazi leaders.  Read the medieval history, though, and you’ll see that the Nazis chose Nuremberg because it had been a center of trade and government for most of 800 years – the Imperial Diet of the Holy Roman Empire met there.  It was an independent “Imperial city” for many centuries but became part of Bavaria in 1806.

My photo gallery on Nuremberg doesn’t have the detail of some others because we did very little touring on foot.  Almost the entire outdoor section of the tour was in a bus, and photography from a bus is discouraging.  I decided to ignore the reflections in some photos, to show you what the town looked like.  It was startling, though, when we pulled away from the bus pick-up, and Frank the guide said, oh by the way, that building there was the SS Waffen barracks: The building is now used as a document center.  Nuremberg has its medieval looking streets:

In general it was more modern looking than many of the cities we toured.  We drove around the outside of the medieval fortified complex – Nuremberg Castle actually had several sections, the Kaiserburg, for use by the Holy Roman Emperor, and the Burggrafenburg, for use by the Burgraves, and the municipal buildings of the Imperial City.  We drove around the walls at great speed, and I was taking photographs not notes, so I’m not totally sure which of my medieval fortification photos belongs to what section.  I’m pretty sure this is the entrance to the Kaiserburg; the massive round tower in the corner is the Sinwell Tower: I also think this tower is the Luginsland tower (“watch-over-the-land” tower), begun in 1377, which was part of the Kaiserburg. 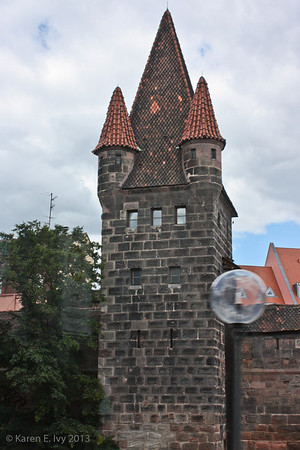 And here’s a better shot of the Sinwell Tower:

What you need to remember about all this beautiful medieval stonework is that the Allies bombed Nuremberg pretty much flat during the war; the castle was heavily damaged, and the Lugisland Tower was totally destroyed.  So all this was rebuilt to its historical form after the war, including some 19th century additions which were removed in the mid-30s.

In between rapid circuits of the old city walls, we stopped at the Nuremberg Palace of Justice for the first round of our World War II tour.  This is where the Nuremberg Trials were held.  It’s still a working courtroom, so the tours happen when a trial isn’t currently scheduled.  It hasn’t changed a lot.  I took a picture of this photograph showing the courtroom in 1946, and now: I found it ironic that one of the doors into the courtroom is ornamented with a huge plaque showing a head of Medusa: I want to introduce our local guide, Frank.  Frank is a native German, very fluent in English, and extremely well informed about the Nazi era.  I was touched when he commented, in a general way, on how one deals with the fact that one’s grandmother was alive during the Nazi era, and what one tells one’s own children; he didn’t offer any answers, only questions.  Here he is in the plaid shirt, herding the cats: Inside the courtroom he gave us an extended discussion of the trials.  I regret to say I can’t remember a thing he said apart from the comments about the effect on families, which probably means he covered the history I already know from personal study of World War II and the Nazi era.  (Yes, I really did read The Rise and Fall of the Third Reich.  All of it.)

After hearing his discussion of the trial, we piled back into the bus and drove through town to the Zeppelin field, where the massive Nuremberg Rallies were held in the 1930s.  It’s hard to get a decent look (or photo) at the Zeppelin Field from ground level because it’s very flat.  Frank and Radi, one of the ship guides, held up a panoramic photo of one of the rallies, to give us an idea of the scale:

The lake behind them is between the Congress Hall (the pinkish building at the left is one end of it) and the Zeppelin field.  The lake is called the Grosser Dutzendteich, which I translate (via Google) as Big Dozen Pond.

Here are the Zeppelin Field reviewing stands, where the Nazi brass would have sat or stood.  The ordinary people would have stood out on the field.  The big structure to the right was the rostrum, where Hitler (or possibly one of his lieutenants) would have stood to address the crowd.

Here’s a view of Zeppelin Field from the lower steps of the reviewing stand; I probably should have climbed higher to take the photo, but it wasn’t very good footing. Here’s a close-up shot of the stands themselves. The structures at Zeppelin Field are in poor shape (see the weeds growing out of the steps?) and need to be restored and cleaned up.  Frank told us the German government is mulling over where to find the money to keep them open and available for people to visit – so they never forget.  I don’t remember the dollar amount but it wasn’t pocket change.

From Zeppelin Field we drove around to the Congress Hall.  This is an unfinished shell, now a landmark.  The Wikipedia article I linked is actually on the Nazi party rally grounds and if you page up you’ll see explanations of all the buildings that were intended for use.  I realize this is trite, but it’s overwhelming; when I look at the shell of the Congress Hall, this goes through my mind:

And on the pedestal these words appear:
`My name is Ozymandias, King of Kings:
Look on my works, ye mighty, and despair!’
Nothing beside remains.

That, of course, is from Percy Bysshe Shelley’s poem Ozymandias.  Read the poem for the full effect.  Here’s a picture of Congress Hall from across the pond: There’s a closer shot, and some interior details of what would have been the assembly hall, in the gallery.  It too is in need of maintenance, although the Documentation Center now occupies part of the structure.

I have no interior photos of the Documentation Center, but it was fascinating.  I could have spent all day there.  It is a museum with one huge exhibit, “Fascination and Terror,” covering the causes, connections, and consequences of Nazi Germany.  In addition to posters and photographs, it has movies (no, this was before “video”; these are films) of ordinary Germans attending sort of summer camps, which the party arranged for them to have a good time.  I’d like to end this post with a quote from my travel diary:

I confess I was never quite sure why the German people bought into Hitler’s line, but I didn’t realize the sophistication of his marketing techniques. He sold National Socialism like soap. He took a generation of children from their parents and raised them in his own image. He outlawed trade unions and abolished the free press.

I was touched by Frank’s concern that the next generation of Germans will have no living relatives who went through the war; he said that’s why Nuremberg, Bavaria, and Germany will spend millions of Euros just to maintain the remains of the Nazi monuments – lest we forget.

And I’ll leave you with a factoid I picked up in the Documentation Center:  Hugo Boss designed the Nazi uniforms!