After Nuremberg our next stop was Regensburg, which we approached on the Danube.  The town is at the confluence of the Danube and Regen rivers.  We moved out of the Main-Danube Canal into the Danube a couple of hours before reaching Regensburg, here’s a shot of a town along the Danube.  I didn’t get the town name. 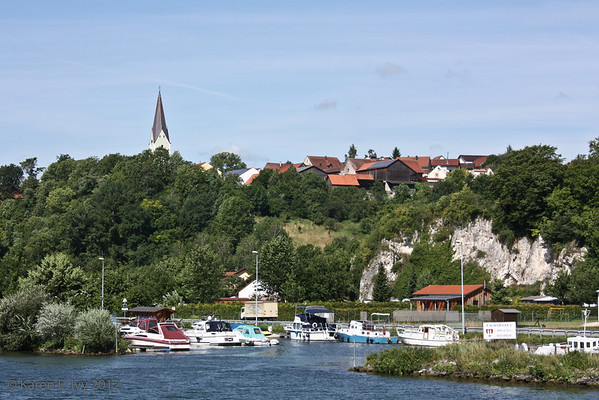 This is the only good picture I got of one of the vacation camps we saw all along all the rivers: Apparently Germans love to camp by rivers in their travel trailers.  Looks pretty permanent, doesn’t it?  The banks of the Danube are just lush like this, all along.  There are more Danube photos, and many more photos of Regensburg, in the Regensburg gallery on my SmugMug site.

I’ve mentioned before the locks we spent a lot of time in.  On this reach we went through a lock that raised the boat up higher than the boat’s height.  Here we are in a side observation deck with some of our fellow travelers, waiting for a huge lock to fill and bring us up to the next level.  One of the reasons going through locks is so slow is that they’re almost all gravity feeds – you go into the lock, they open a gate, and water either falls in (to raise you) or falls out (to lower you).  No pumps involved to speed things up.  The things on the right are pillars on the interior of the lock wall.  You can see how close the lock wall is to the side of the boat – easy arm’s reach. 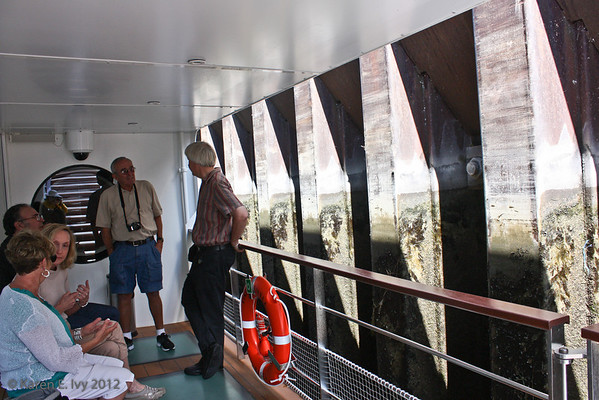 Regensburg was much more of a mix than some other towns; Miltenburg and Rothenburg were pretty solid medieval holdovers, but Regensburg has a modern business district, interestingly decorated with reused doorways from older buildings.  This, for instance, is a 13th century abbey door, inserted into a much more modern building (and decorated with pigeon spikes that the 13th century certainly wouldn’t have bothered with): And here’s a very modern shop with a much older doorway: The first thing you really notice about Regensburg is the Steinerne Brücke or Stone Bridge across the Danube.  This bridge dates to the 12th century, and until the 1930s was the only way to cross the river in Regensburg.  It’s currently being restored, hence all the plastic wrap on the top; but you can see the stone footings.  The Wikipedia article says that those stone footings played holy hell with the current; ships going upstream had to be towed, and to accommodate modern river traffic they’ve had to build a canal bypass.  If you look closely you can see that the bridge also crosses an island in the middle of the river. This bridge made Regensburg a major international trading center, opening a route for trade with Venice.  The city had a wealthy merchant class. Here’s a shot of Regensburg along the Danube, taken from the Stone Bridge: As a town of merchants, it was full of “merchant towers” – absurdly tall buildings (believe me, with no way up but stairs, a 7 story building is absurdly tall) of which the merchants only actually used a couple of floors.  We saw several of these towers; the taller the tower, the richer you were, and the merchants competed to build the tallest.  This isn’t the tallest – I have a photo of one that has at least 8 floors, but it isn’t as well preserved as this. Our guide claimed that these towers were the origin of the phrase, “stony broke:”  when you ran out of money you could sell the stones from your merchant tower to raise more, and when those were gone you were “stony broke.”  I haven’t been able to verify this, and it seems very odd to me that an English idiomatic phrase should have originated in Germany; but that’s what she said.

The political history of Regensburg is quite interesting, it spent a lot of time in the middle ages as a “free imperial city,” subject only to the Holy Roman Emperor; read the Wikipedia article for broad details.  From 1663 it was the permanent seat of the Perpetual Diet of Regensburg, the Holy Roman Empire’s equivalent of the modern Reichstag, which met in the city hall or Rathaus in Regensburg.  This is the Rathaus; the bay window in the middle looks out from the Reichssaal, where the Diet met. The Rathaus doorway, the ornate Gothic arch on the right above, has one of the most interesting things I saw on this trip:  the literal “keys to the city” of Regensburg.  Here they are; if you look at the doorway above, you can just see them but here is the detail. These are the measurements that the merchants of Regensburg used; these were the legal definitions of a foot (the shoe-shaped thing), a cubit (the medium strip), and a fathom (the long strip).  (In Bill Cosby’s hilarious monologue about Noah, Cosby, speaking as Noah, asks God, “What’s a cubit?”  OK, Noah, in Regensburg, that’s a cubit.)  If you sold someone 9 fathom of rope in Regensburg, it had to match that strip 9 times.  In a world without international standards, these were extremely important, and I didn’t see them in any of the other cities we visited.  Remember, Regensburg traded with Venice, which wasn’t part of the Holy Roman Empire and had its own measurement standards.

Other things I found charming about Regensburg:  St. Katharinenspital, a hospital and brewery.  Here’s the hospital: And here’s the SpitalGarten, where you go to drink SpitalBier.  It’s right next door. As you walk through the main part of town you will be startled and charmed by this beautiful 16th century fresco of David and Goliath on a building wall.  I love the way Goliath leans his elbow on a window frame. There are older sections, though, where the buildings aren’t in as good shape and may not even be entirely square or completely vertical.  Notice that, unlike the merchant towers, 5 stories is about as high as these go. In among the modern construction and the parked cars are the remains of a medieval stable, with a tower behind it that is called the Römerturm or Roman tower, but is actually 13th century. Making our independent way back to the boat, we came across this very interesting doorway: We had to look that up.  The word “Alumneum” was used for Protestant religious schools that emerged out of former monasteries. This building still houses a religious fellowship.

I haven’t mentioned any churches in this post, and that’s because the churches of Regensburg were interesting enough that they’ll get their own post.