I forgot to mention that at Regensburg we saw the first really hot weather of the trip.  Until then the weather had ranged from actually raining to partly overcast and cool.  Walking around this town we were sweating; but it was a gorgeous day.

I noted in the earlier post that Regensburg is also a real town, with businesses that aren’t tourist related.  My diary comments that it’s “real enough to have some alleys I’d hesitate to enter at night.”  In fact it was down in the rougher area by the river that we found the Johannes Kepler house, which I meant to mention in the other post:

Kepler died in this house in 1630 on what turned out to be a short visit.  We wanted to tour the house, which has been restored, but it was only open on weekends and holidays, and we were there on an ordinary Monday.

But I digress – this was to be about the churches.  I have a whole photo gallery just of the churches, with more detail photos.  The main church in Regensburg is the Dom, St. Peter’s, with the usual two spires and elaborate main entrance: 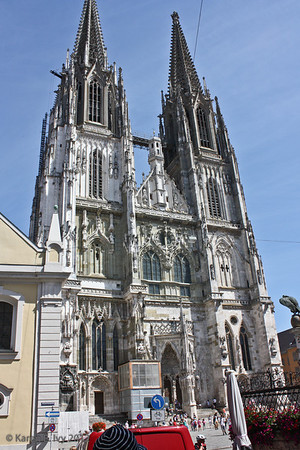 On the facade, I found a statue of St. Peter in a boat (the fisherman), holding a key (it’s usually a pair of crossed keys, the keys to Heaven).  I like the waves on the side of the boat. 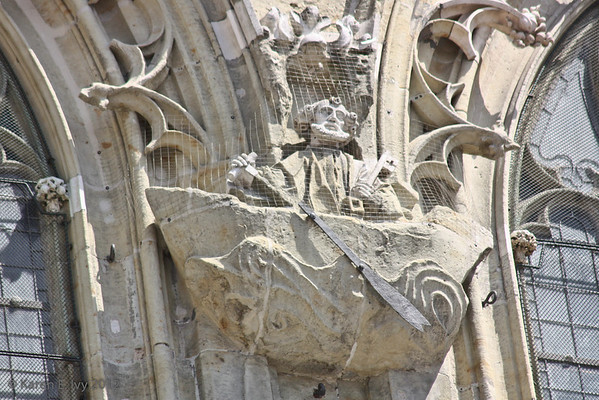 I was interested in a detail of the facade showing a date form I didn’t see anywhere else:

That’s 1486 – the funny looking symbol in the hundreds place is half of an 8 – a 4.  This was also the only church I remember seeing with a triangular entryway.  I didn’t see any explanation of why they did that, although a history of the Dom which I found suggests that the “atrium” was added in the 11th century – Regensburg has had a cathedral since the 8th century – and was included when the cathedral was rebuilt in mid-13th century, after one of the inevitable fires which plagued medieval structures.

The nave has a large crucifix, with a statue of a praying man, at the head of the main aisle.

Like Bamberg, the Regensburg Dom has a statue of a horseman – in fact, it has two – but unlike the Bamberger Reiter there’s nothing mysterious about them, they’re just saints (I assume; maybe they’re kings) on horses.  This fellow has an inscription on his pedestal, which I can’t read. Regensburg does have a famous statue, though, the Smiling Angel, part of a group on the Annunciation.  It took me 3 tries to get a reasonable photo of her; light levels in the Dom were worse the usual.  The Smiling Angel is very popular. The statues include a very Baroque (and slightly drunken looking) Archangel Michael, waving his sword over his head:

The Sailer Chapel is set aside for private prayer.  That isn’t a typo; it’s named for the tomb of Regensburg Bishop Johann Michael von Sailer (1751-1832), which was erected by King Ludwig I in 1837 in honor of his former tutor.

After we toured the Dom, we were told we should look at the Alte Kapelle, and the two churches couldn’t possibly be more different.  From a high Gothic cathedral, we come to the most overdone rococo interior I’d seen since the Residenz at Würzburg.  The structure’s exterior is quite plain, it’s just a basic box.  I couldn’t find much in English on the Alte Kapelle.  Lonely Planet says the church core is about 1,000 years old and the “Gothic vaulted ceilings” were added in the Middle Ages.  But sometime in the (probably) 18th century, somebody redecorated it: According to Lonely Planet, it’s only open for services, but they must have left the door ajar because we walked right in.  True there was a gate blocking the aisle. but we didn’t have to peer through a grille except for a single chapel, which really was locked up: After touring the Alte Kapelle we walked back to the Embla by a route the tour hadn’t taken, and some of what we saw is in the Regensburg post.  When we got back to the ship, I couldn’t find it at first.  There is a shortage of dock space at the popular sites, and the cruise ships were literally docked 3 across at a single mooring.  Fortunately I was able to identify Embla as the middle ship of three, because the ship facing the dock directly had a very intimidating sign:  “Private ship.  No trespassing.”  Being a brash sort, I walked aboard anyway and asked how to get to Embla, and of course they said, walk on through.  But I wonder how many timid sorts hesitated at that.

1 Response to Churches of Regensburg