Museumsdorf Bayerischer Wald translates as “Museum Town Bavarian Forest” – isn’t the German nicer and more euphonious?  This is an open-air museum some miles from Passau, in Tittling.  (Yes, really.)  The bus ride took us about an hour, as I recall, through the Bavarian countryside. 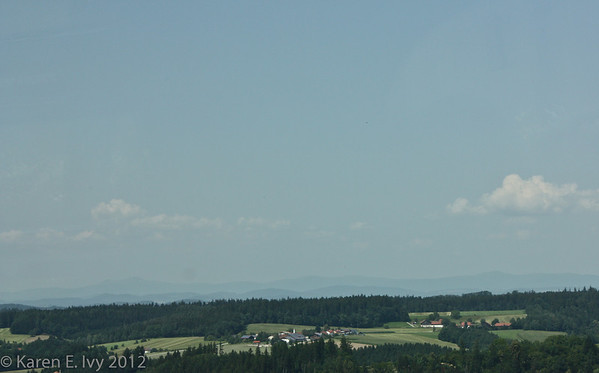 You can barely see a range of hills through the mist – we were told that was in the Czech Republic.  It was a lovely day if rather warm.

The museum contains about 150 buildings and many more folk implements collected from the Bavarian area, dating from 1580 to 1890, brought together to show what common people’s life was like during that time.  As a life-long student of the middle ages I found it fascinating.  Yes, the middle ages was officially “over” by 1580; but believe me, in rural villages far from the cities, life didn’t change significantly before about 1900, and not only in Bavaria.  I’m giving you a selection of photos here, the full gallery is at my SmugMug site.

We were greeted at the gateway by a nice young man in lederhosen, with an accordion.  The Bavarians may have had accordions but I think this one is modern. Actually, our first greeting came from that very medieval creature, a wandering chicken:

The first building we came to was a restored farmhouse (complete with outhouse; I would have expected that to be in the rear but you never know).

I was interested in the method of keeping the roof shingles in place (having lost a shingle or two in a windstorm a couple of years ago): Near the farmhouse was a shed with old wagons in it – and holes in the wall boards which our guide told us were bullet holes from the Napoleonic Wars!  Before you say, wait a minute, Napoleon didn’t fight at Tittling, remember that these buildings all came from somewhere else, and Napoleon fought at a lot of places in Germany. Every village would not have had a school, but they include a 300 year old school building in the museum: Someone asked how these old wood buildings hold up for so long, and the guide said that as long as the roof is tight and the wood well dried before construction, it’s fine.  I didn’t go into any of the buildings but they looked quite solid from outside.  Note the crucifix on the side, and remember that Bavaria was and remains mainly Catholic.

I wouldn’t expect every village to have a school, but I would expect most of them to have a baker – who may well have baked large items for local people who didn’t have an oven of their own.  Here’s the inside of the baker’s oven: This chapel is very elaborately decorated and must have belonged to a prosperous village: I was completely charmed and touched by this carpenter’s crucifix – notice all the tiny hand tools and ladders: Several of the buildings had birdhouses built in under the roofs:

Some of them also had beehives: A grim relic was a “plague column” – these were erected to give thanks, by the villagers who survived the plague:

The guide wasn’t sure what this building was or why it was raised up on stilts:

If the stilts weren’t wood, I’d say it was a grain storage building, raised off the ground to foil rats; but rats could climb those wooden posts.  Could have been used to dry meat or other provisions for storage, maybe?

The center of any village would have been the village pond and mill.  This mill still works and can grind grain, although it didn’t while we were there.  Note all the spare millstones around the walls. Here are the mill inner works and the mill wheel:

And here’s the mill stream, with the woodworks to control the flow and direct it away from the wheel when the mill isn’t in use:

These geese are modern, but a village might well have had a flock of geese and may even have used them for defense.  These geese are getting a photo op from one of our fellow tourists:

It was a fascinating day and I enjoyed it very much.  At the end of the day we all refreshed ourselves at the little gasthaus in the park, serenaded again by the man with the accordion, before boarding the busses back to Passau and the boat.