Today I got rid of the least satisfactory desktop computer I ever bought, an HP Pavilion Slimline s5280t.  If you have one of these loads of crap, and it’s still running, buy a new replacement immediately and transfer everything.  If you wait, you may not be able to.

It’s only 4 failures, you say.  True, but four extremely disruptive and annoying failures in 5 years.  I’ve had Dell computers that ran for 5 years without a single problem; I’m pretty sure I had a Dell that ran for 6 or 7 years without any problem.  When I think of the days when Hewlett-Packard was the absolute gold standard for any kind of technical equipment, it just makes me cry.

In any case, I’m somewhat limited in my ability to respond to email these days, so bear with me.  I hope to get the new system back by the middle of next week.

END_OF_DOCUMENT_TOKEN_TO_BE_REPLACED

Well, not entirely – but a good deal of our “Vienna city walk” was done on a bus, hence the odd things that sometimes appear in my photos.  You’ll only see the ones I could reasonably salvage.  If you just want to go look at photos, you’ll find the Vienna gallery at this link.

The first thing we saw as we turned into town was the Church of St. Francis of Assisi, in Mexicoplatz: 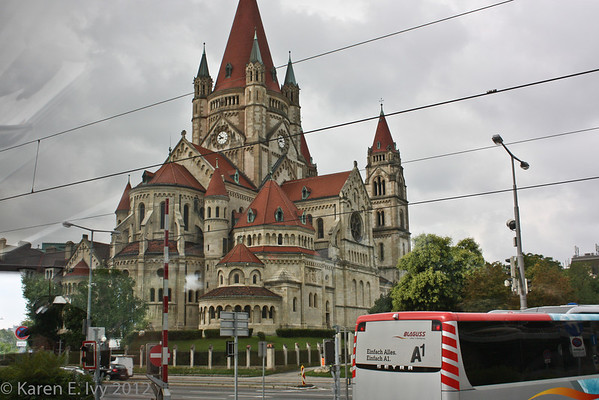 Also known as the Kaiser Jubilee Church and the Mexicokirche, it was built around the turn of the 20th century to celebrate the 50-year anniversary of the reign of Emperor Franz Joseph I of Austria, and consecrated in 1910.  I was interested because of the combination of church styles:  all those round arches are very Romanesque, and yet it has a handsome set of flying buttresses, usually associated with the later Gothic style.  The bus turned a corner, and we continued our tour.

END_OF_DOCUMENT_TOKEN_TO_BE_REPLACED

And I Didn’t Have a Camera

Returning from the gym on Easter Sunday, in the course of an errand I was driving down San Pablo Avenue near the 580 overpass, instead of rolling straight home on the freeway.  While driving, I saw a truly wonderful sight.  Two cars in front of me was a car containing a person in a white rabbit suit, waving to the people on the sidewalk!  I couldn’t see the details until we both got into a left turn lane.  The car was an ancient pale yellow Dodge GT convertible, top down, with an original California license plate from the ’60s – 3 yellow letters and 3 yellow numbers on a black background. It had fins.  I couldn’t tell you who was in the rabbit suit because all I could see was the back of its head.

And when I dived into my purse for my smartphone – I realized I’d forgotten it.  So all you get is a verbal description from me; but it absolutely made my day.  Happy Easter to all.

The Wachau Valley and Dürnstein

Having left Melk Abbey around noon, we sailed on down the Danube toward the Wachau Valley.  This was the first day we had had unfettered access to the soi-disant “sun deck,” and of course it was overcast, although by the time we set out the rain which had poured down on Melk had slacked off.  As usual, this post includes some but not all of the photos I took that afternoon; you can find more of them at the gallery Dürnstein and Wachau Valley.  You can also see larger versions of anything in the gallery.

END_OF_DOCUMENT_TOKEN_TO_BE_REPLACED 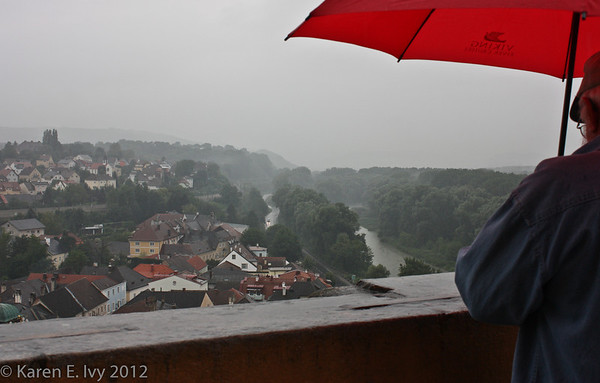 END_OF_DOCUMENT_TOKEN_TO_BE_REPLACED

We visited my sister right after Christmas.  Among other things she was recovering from a fall which chipped a bone in her foot, so we didn’t get out much, but we had a good time anyway.  Jim and I went hiking in the Red Rock recreational area, especially the Calico Hills: