Here’s the front entrance of the Dom.  All the photos I took of the Dom are in the gallery called St. Stephen’s, Vienna. Here’s a carved pillar, with an inset painting that may represent the Annunciation.  It’s all very ornate.  If you want to see the details close up, go to the gallery and you can enlarge the view.

The side aisle and pews: Side aisle and pews

As usual in this architecture, the pulpit is raised well above the floor of the nave and reached by an elaborate stone staircase: But as I walked closer to the staircase, I noticed something very odd on the handrail.  What on earth are these little stone critters crawling up – or down? – the handrail?  I can’t recall seeing this anywhere else. Wikipedia tells me they represent “toads and lizards biting each other, symbolizing the fight of good against evil.”  It also says that a stone puppy at the top of the stairs protects the preacher from intruders, but I couldn’t see the puppy; they don’t allow tourists to climb the pulpit stairs.

The High Altar, looking down the nave:

I don’t know when the statues on this column were carved; they look pretty late, they’re very realistic – especially St. Sebastian, at the top, with his arrows.  The lower statue on the right was identified as the Madonna with the Protective Mantle.  You can still see traces of the colors they were originally painted.

After exploring the cathedral, we found the cathedral museum, up a stair to a sort of mezzanine under the organ.  It was kind of enclosed by the organ, and I got some unusual photos of organ innards.  This is a little out of focus – which give it a rather Escher-like feel – the light there was dim enough that depth of field was impossible.  There are more organ photos in the gallery.

We could also, of course, see the larger parts of the organ.  This is one of several very modern wood carvings which supported groups of larger pipes.  Again, there are more photos in the gallery.  The organ and its associated carvings are quite beautiful.  I don’t know why they chose to illuminate it with purple light unless it’s some association with the old Empire. Reliquary with scapula of St. Leonard

Among other things the museum had this nice late 15th century statue of St. Sebaldus, carrying a church.  St. Sebaldus was the patron saint of Nuremburg, and has a church named after him in that city.  There’s very little known about this saint, but his cult can be dated to the late 11th century. Unusually for a medieval art work, the carver is known, one Wilhelm Rollinger. 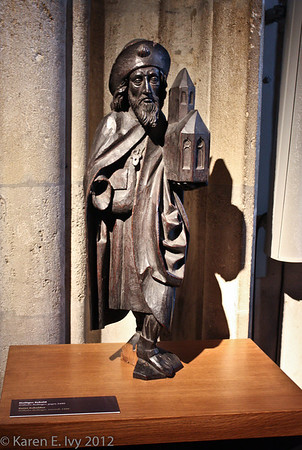 Other museum relics include this medieval wall carving, rescued from some earlier reconstruction: Most interesting to me was a surviving fresco, uncovered during renovations.  This wasn’t well documented but I’m pretty familiar with medieval art trends, and I’d place this in the 12th century, or not much later, largely because of the total lack of perspective.  Compare it with the St. Sebaldus statue, or for that matter any of the statuary in the church proper, and you’ll see what I mean.