Fleet Week 2015 just came and went.  Oops – that means I never posted my photos from Fleet Week last year, when on October 12, 2014 I saw the Blue Angels perform from the Golden Gate Yacht Club, courtesy of our host, retired Air Force Colonel Conway Jones.  It was quite a day.  The weather was perfect although, as the photos show, the air quality kind of varied depending on how many jets had flown by.  This photo is before any of the jets arrived. 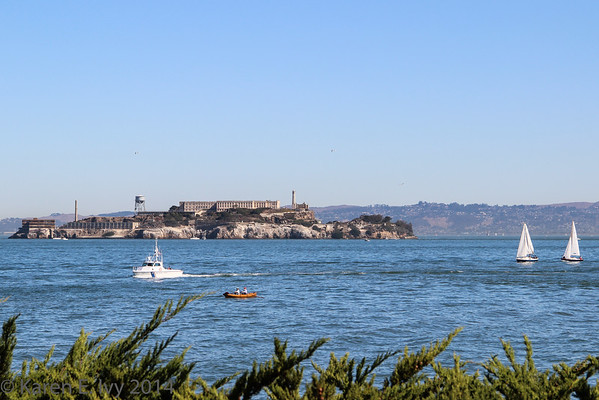 All the photos for this day are in my gallery Blue Angels 2014, on my SmugMug site, including more shots of all the planes, plus some pictures of the bay.  If you want to see any of these photos blown up, you should go look at them in the gallery.  The links I post here won’t enlarge if you click them.

As you can see, we were right at water level, looking across to Alcatraz.

I read recently in the San Francisco Chronicle (which I can’t link because it isn’t published online; ok, your loss, Chron) about the Navy Leap Frogs – the article suggested that they use streamers of paper to judge the wind speed, and little kids would collect the used streamers.  I hate to tell the author this (I think it was Steve Rubenstein), but last year when I saw them, they used smoke plumes, like this: 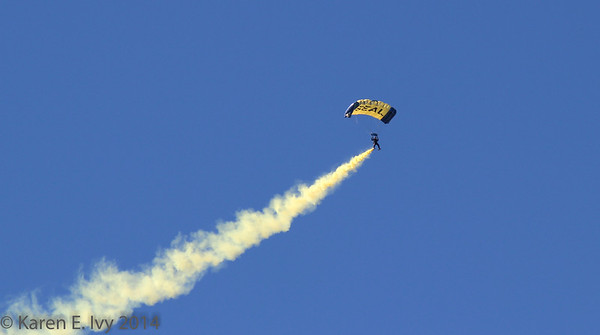 The Fleet Week air show isn’t just the Blue Angels, although they’re hard to miss.  I enjoyed the demonstration by the The Horsemen Flight Team, showing us the airplanes that helped win World War II:  P51 Mustangs.  Note the propellors.  These aren’t jets. 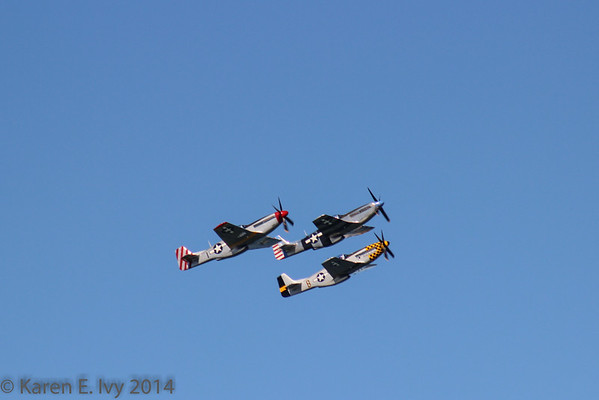 Super Dave Air Shows did demonstration flights in the Scheyden MX2 –  you can see he’s flying very low over the bay.

You can’t do an air show without biplanes, and here’s one, from Team Oracle Air Shows, flying upside down – that’s his landing gear, sticking up. 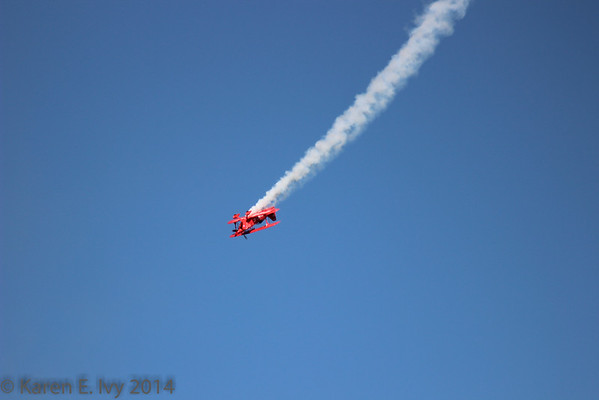 The other thing biplane pilots love to do is fly straight up in the air and stall out, and here’s the pilot from Lucas Oil Air Shows, doing that: 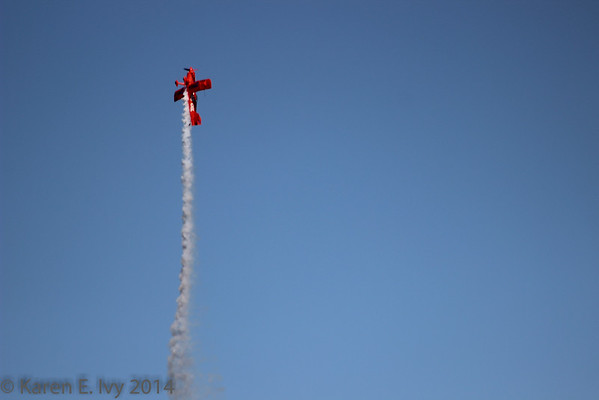 Lucas Oil Air Shows, about to stall out

There are jets among the show openers – here’s the Patriots Jet Team, flying low past (I think) Angel Island.  Count the tails – there are 5 planes there.  The Blue Angels aren’t the only ones flying in close formation.

By the time the Team Oracle plane flew past Alcatraz, the air was getting kind of brown… 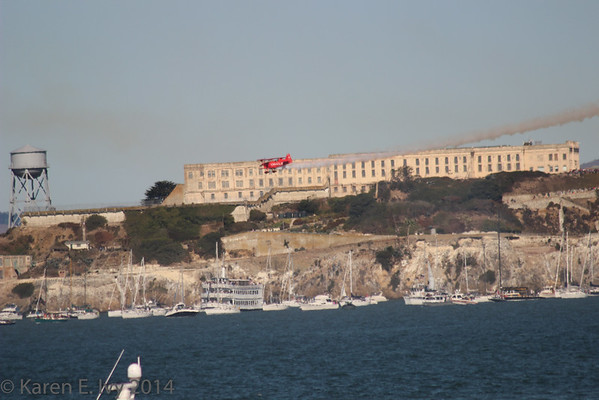 You can always tell when the Blue Angels are about to arrive, because they’re always preceded by Fat Albert, a C-130, their logistics plane.  This is Fat Albert, coming straight in from the Golden Gate Bridge:

You’ve all seen the publicity photos of the perfect, close formations.  I got a few pictures that aren’t quite so standard.  Here’s part of the team flying half right-side-up, half upside-down.  Still in perfect close formation. 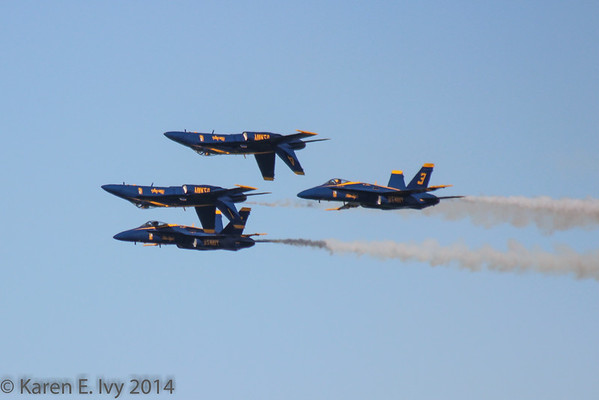 Here are 4 of them flying with all their landing gear extended, God knows why.  They look like beetles.  They were not about to land. 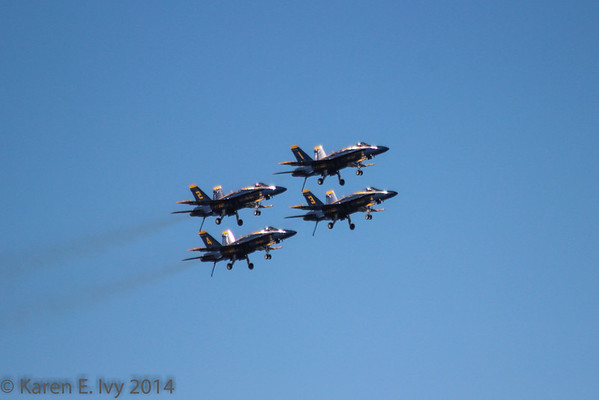 Here they are, flying (IMHO) much too close together. 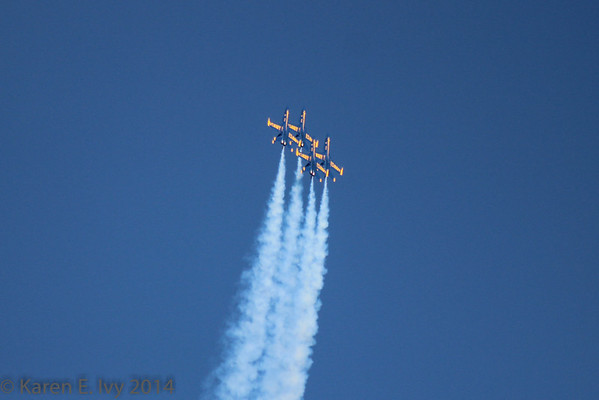 I don’t know why I always seem to have gotten 4 of them, there were six flying.  So here are all six, fanning out over Alcatraz, and you can see why the skyline is turning sort of brown.  The Blue Angels are expert and fascinating, but ecological – no. 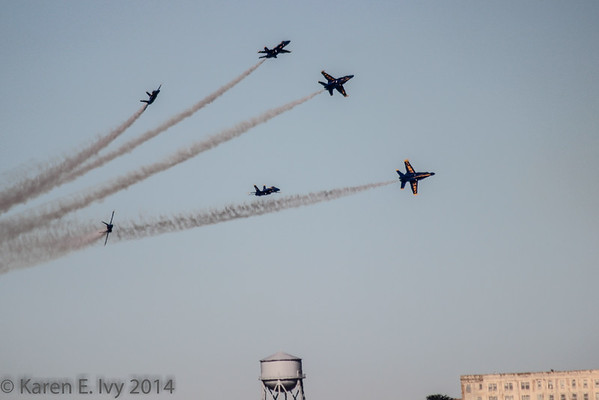 Blue Angels fanning out over Alcatraz

Just a reminder, there are more photos of all the planes at my SmugMug site, click here for the link.

This entry was posted in Personal, Photography and tagged Blue Angels, Fleet Week. Bookmark the permalink.