When I left Budapest in 2012, I didn’t expect to return again a few years later, and certainly not to sing there.  But the Oakland Symphony Chorus, in which I’ve sung since January 2000, decided as a group to do an international performance tour in central Europe – beginning in Budapest.  It took us most of a year to organize it, and we ended up with about 70 people on the tour – 45 singers, and the balance were staff, friends, family members and other unspecified supporters. Here we are waiting at the gate:

Waiting in SFO for our plane

All the photos I took on this trip are in the gallery Oakland Symphony Chorus 2015 Tour, which has 4 folders.  I spent a lot of time rehearsing and performing, during which I couldn’t take photos.  My husband Jim was the unofficial “trip photographer,” and his photos are in a gallery called Oakland Symphony Chorus European Tour June/July 2015. In addition to photos, he took videos of rehearsals and performances.  He took the photo above; obviously, since that’s me in the bottom right corner!

We left San Francisco International Airport on Monday, June 22, 2015, except for a few people who had flown ahead to do a little sightseeing.  The plane left around 3 PM, 50 minutes after its original takeoff time.  We’d been at the airport since 10:30 AM.

Our outbound trip was on KLM, and I expected better of them.  The plane was an old 747-400, refitted for “modern” travel – satellite phones and video screens in the narrower seats, and the foot area was at least a third full of electronics for the gadgets.  I was in the 3rd seat of a four-across.  I can imagine roomier coffins.  They expected us to sleep all the way over, to the point of shutting all the window blinds and dousing the cabin lights.  I managed to doze off and on, but never really got comfortable.

We landed at Amsterdam for a 5 hour layover, long enough to go through EU customs and get a nice, non-fast food lunch at a restaurant serving freshly cooked soup and veggie offerings (something with bell peppers).  Then on to the next gate for a 2 hour flight to Budapest, thank God in a newer plane with better leg room!  I slept the whole flight.  I’m still wondering how long the trip took – we arrived in Budapest around 4 PM European time on Tuesday, June 23; but there’s a 9 hour time difference.  I calculate we spent 17 elapsed hours in transit:  9 hour flight, 5 hours in Amsterdam, 2 hours to Budapest, and that doesn’t count checking in and out at either end.  It just felt like it had taken all week.  Here we all are waiting for the bus, at the Budapest airport: 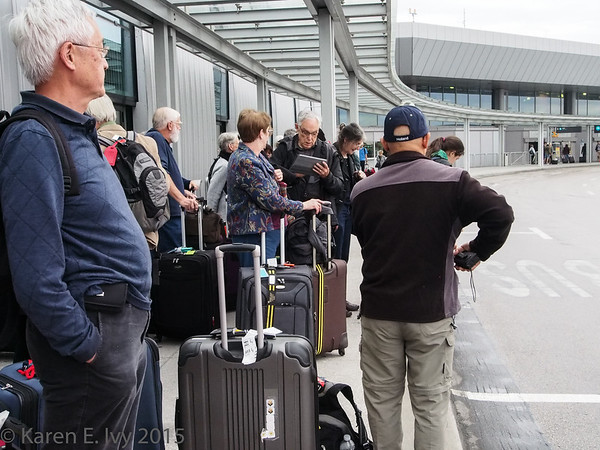 Waiting for the bus in Budapest

The bus was really interesting – we traveled in a Blackpearl Vanhool 927 DT double-decker bus, holding 83 people.  Most of the men couldn’t stand up straight on the second deck.  I never got a really good photo of the bus because we were always too close to it.  It was around 45 feet long, with a luggage trailer making the total length 60 feet (in meters, of course), which is the legal maximum, according to Andy.  Andy was the driver, an Austrian named I think Andreas, and I’ve forgotten his last name.  I have never, and I mean never, seen a better driver.  He handled that huge thing like a master, even in tiny European streets with cars parked on both sides, and literally inches (I suppose I should say centimeters) to spare.  By the end of the tour, Andy was a firm member of the group and everyone respected him.

Budapest is historically two towns, separated by the Danube River:  Buda on the west, hilly and scenic, and Pest on the east, flat and sprawling.  Buda is the site of elegant old houses and many historic sites, like the palace, the Matthias Church, and the Fishermen’s Bastion.  Pest is where ordinary, non-rich people live; it has the Parliament building and St. Stephen’s Cathedral, but it also has the business and shopping districts.  On our trip in 2012, we spent most of our touring time in and around Buda; Pest was covered by a bus ride out to Heroes’ Gate and back.  This time, our bus trip to the hotel took us into town through Pest, driving along a secondary road, next to a tram line.  This wasn’t a tourist district – the road was flanked by any number of small businesses in older, poorly maintained buildings, and vacant lots with lots of unmowed grass.  I have no photos from this part of the trip, frankly because I was so tired it didn’t occur to me to get out the camera!

We stayed in the Lion’s Garden Hotel, which is in Pest. My diary says it was “compact but clean, and the bathroom has counter space.”  I would have been happy to fall straight into bed, but the tour company had arranged a dinner in the hotel at 8, for which we didn’t have to pay.  The purpose of this, of course, was to keep us up until at least 10 o’clock, to force us onto local time.  The food was quite good, but I simply can’t eat much at that hour.  Here we are having dinner in the hotel lobby:

Dinner in the Lion’s Garden Hotel