The tour company (ACFEA, which specializes in tours for performing groups) kindly scheduled us nothing but an optional morning tour of Budapest on June 24, our first full day in Europe after 17 hours in transit.  Naturally, we all piled into the bus and went. The photos for this day’s tour are in the Budapest 2015 folder in the photo gallery.

There must be a rule about tours of Budapest – they all seem to start with a bus trip to Heroes’ Square.  Our trip in 2012 did, and so did this one, although the Lion’s Gate Hotel is only about a mile away.  Because I took large scale photos of Heroes’ Square in 2012, and because I was using a different camera, I confined myself this time to closeups of the big statues.  From my previous trip, here’s the big view of Heroes’ Square: 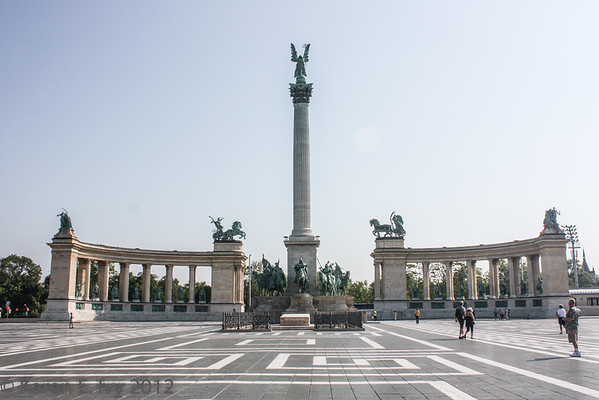 Read the Wikipedia article for full explanations of who all the statues represent.  The ones at the foot of the big column represent the 7 Magyar chieftains who led the Hungarian people into the Carpathian Basin. 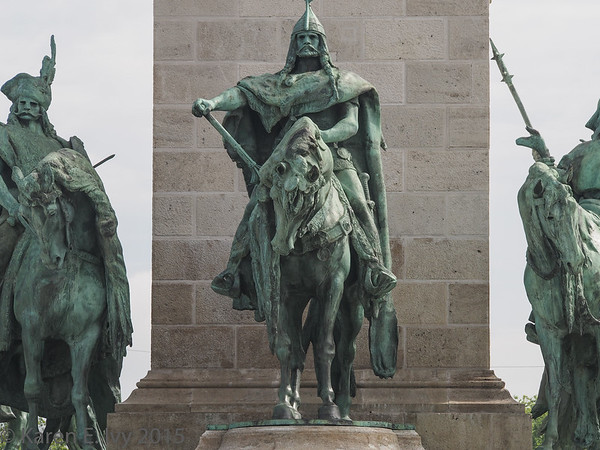 Arpad, founder of the Hungarian nation

And some other Magyar chieftains, one with a very odd bridle on his horse: 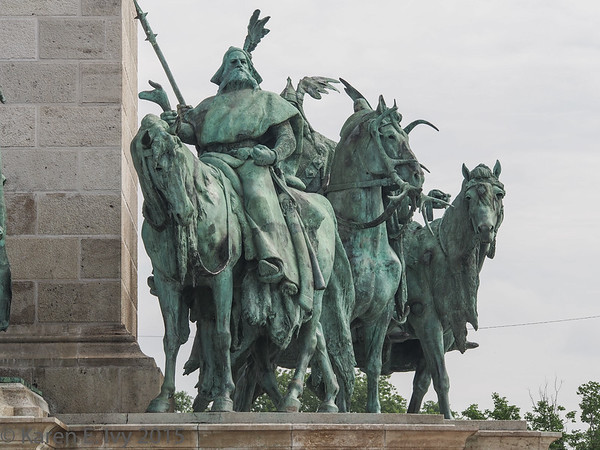 Some of Arpad’s buddies. Note the harness on the middle horse.

The area around the square has buildings in various stages of disrepair and various ages.  Among all the older buildings there’s a new one guaranteed to make you dizzy – yes, it really does lean like that:

The “drunken” building near Heroes’ Square

Most of the buildings are much older than this, and some of them have really beautiful, elaborate plasterwork – you might even call it baroque.  In fact, if you go through all the photos, you’ll see a great deal of baroque decoration all over town. 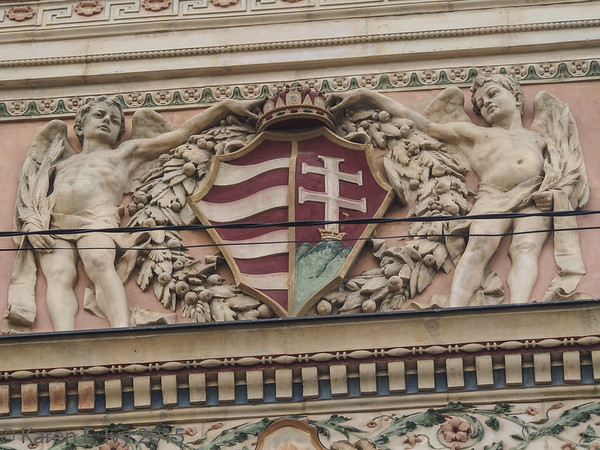 Plaster detail of the Kunsthalle

The odd thing about the Kunsthalle is that this is on the side of the building.  The pediment in front isn’t baroque at all – it’s Russian icon style: 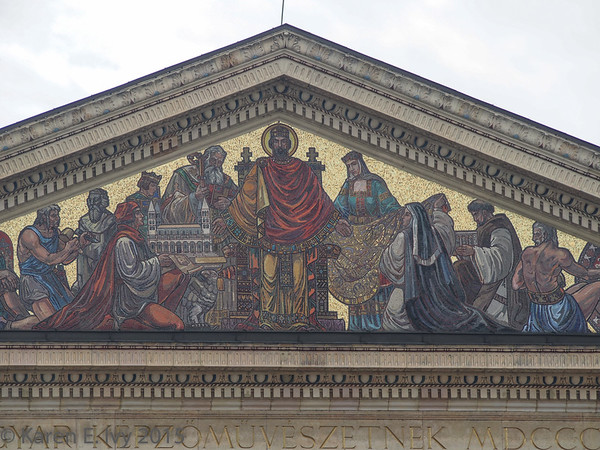 Pediment of the Kunsthalle 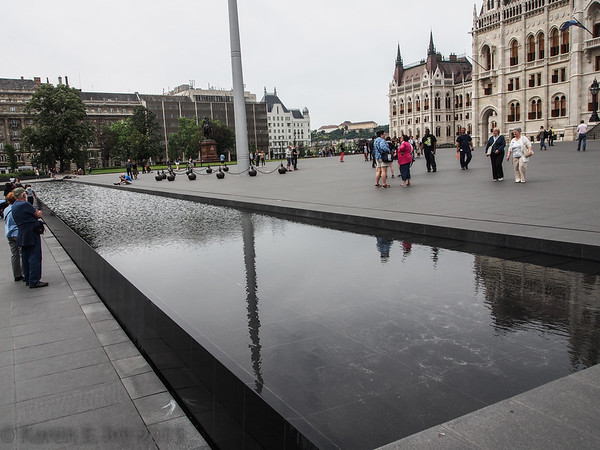 Back in the bus, and our next stop was the foot of Buda Castle Hill (which is what the area around Matthias Church is called).  We were going to see the Fishermen’s Bastion, and the Matthias Church, where we would rehearse and perform the next day.  We stopped at the foot of the hill because the bus couldn’t go any farther up – the streets are too small.  So we walked up several flights of marble stairs to reach the plaza in front of Matthias Church, complete with the statue of St. Stephen.  Then when the tour was over, we walked back down again. 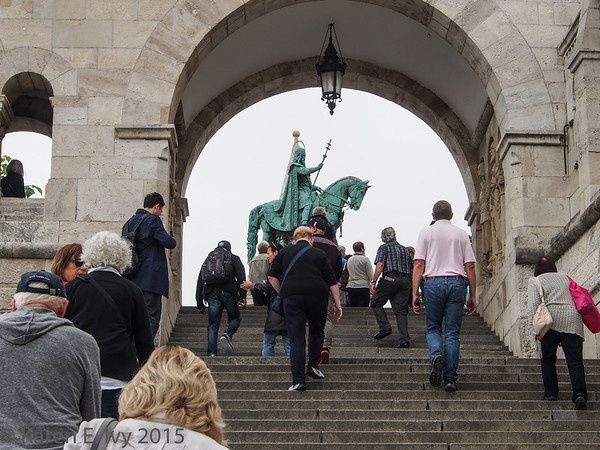 Climbing the stairs up to the plaza with the statue of St. Stephen

Matthias Church, by the way, is not “Saint” Matthias Church.  Matthias Corvinus, or Matthias I, wasn’t a saint.  He was the king of Hungary from 1443 to 1490.  He didn’t even establish the church; the first church on the site dated to 1015 and was founded by Saint Stephen.  It was called the Church of Our Lady, or of Mary, until the 19th century when it was renamed after Matthias. Matthias Church is a basilica (an important church) but not a cathedral (the seat of a bishop).  We’ll get to the cathedral, which is dedicated to (surprise) St. Stephen.

I had the same problem with the Matthias Church that I had with the Parliament building, I was too close to it to get a really good picture.  I only got details.  So I will include the really nice telephoto shot of it that I took in 2012: 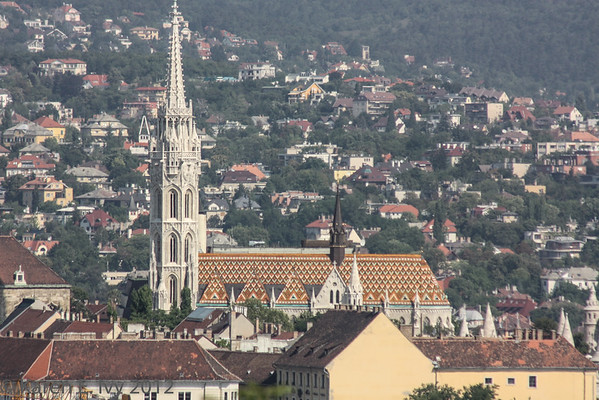 I got a good detail shot of it this year, showing the tile pattern on the roof, and the raven (“corvinus”) holding a gold ring in its beak on the small tower.  Matthias was the son of John Hunyadi. 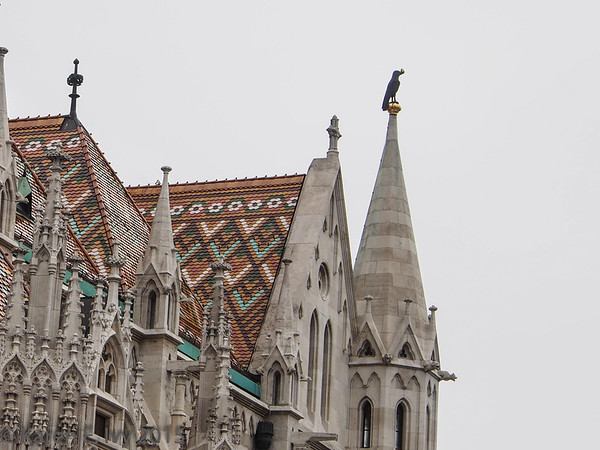 Matthias Church detail – the raven holding a gold ring in its beak was the Hunyadi coat of arms.

We wandered around the church and the Fisherman’s Bastion for awhile.  I got some nice gargoyles on the Matthias Church.  I collect gargoyles when I tour European churches.  The Wikipedia article suggests that the gargoyles, and the tile pattern on the roof, caused some consternation when the church was redone. 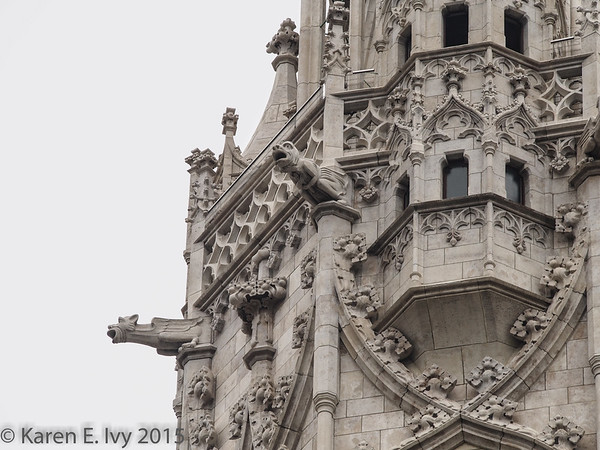 Here’s the big plaza, showing the Fisherman’s Bastion and the statue of St. Stephen.  The Fisherman’s Bastion is a late 19th century construction; the name refers to the medieval guild of fishermen who were responsible for defending this stretch of the river.  It’s purely ornamental and was never used for any kind of defense. 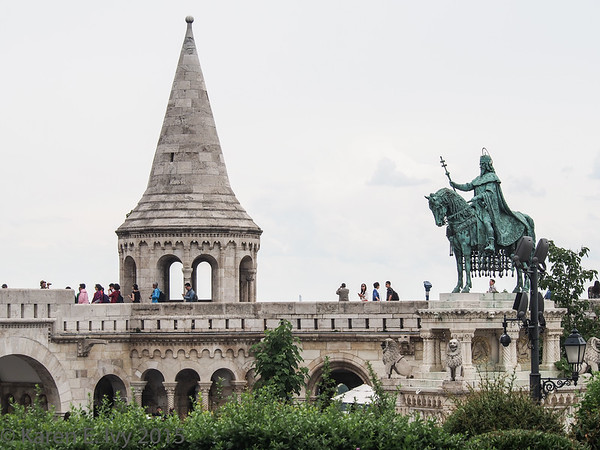 I said I’d give you a better photo of the Parliament Building from across the river, and here it is, from the Fisherman’s Bastion. It’s much too big to photograph from up close. 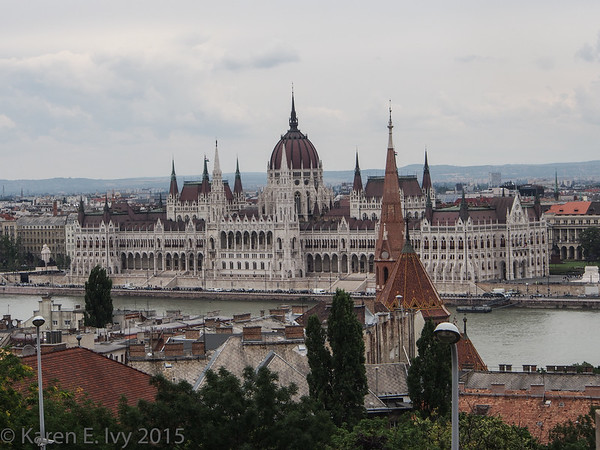 After the stop on Buda Castle Hill, we drove around to an area called the Castle Hill Overlook, where you can take vast panorama photos of Budapest.  I took a couple, of which this is likely the best: 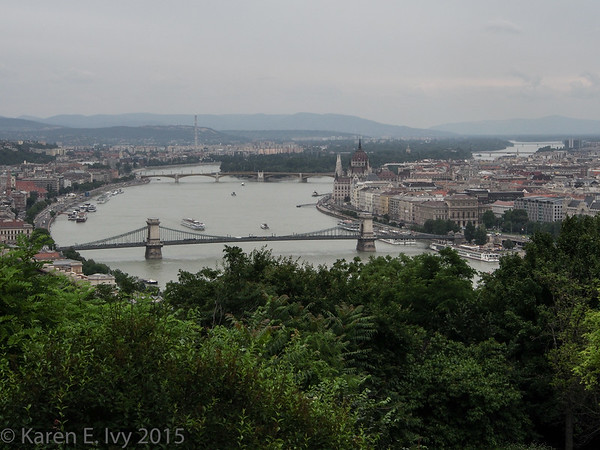 The Danube through central Budapest

You can see two of the seven bridges in this photo.  This was also the location where I stepped the wrong way on a cobblestone and fell almost flat – I caught myself on the palm of my extended right hand, a very bad idea.  Incredibly, although I can still see my left foot turning sideways on that cobble, I didn’t sprain an ankle, I didn’t bruise myself particularly, and I didn’t break the camera I was wearing in a harness.  I don’t know exactly what I did to my right hand but I had to be very careful picking up cups of tea for most of the rest of the trip.

After the Castle Hill overlook, the bus took us all downtown and left us to our own devices for the rest of the afternoon, with a 4 PM pickup.  Jim and I decided have lunch and then look at St. Stephen’s Cathedral, which was a few blocks from our bus stop. We ate lunch at the Buso Bistro, near the cathedral, which looked like a local restaurant – the staff spoke English but I wasn’t at all sure what the other patrons spoke.  The food was tasty but heavy – Hungarians are real meat-and-carb people – I think we had noodles rather than potatoes, in a rich sauce.  Don’t expect veggies in a Hungarian restaurant.  In fact, we picked up some bread and apples at CBA Market near the hotel (the Lion’s Garden Hotel isn’t in a rich district), and ate that for dinner!  When you buy food in a country, not in a restaurant, you get a very realistic view of it.

By this time the sky was looking pretty dark and a chilly wind was picking up, so we didn’t waste much time admiring the exterior. 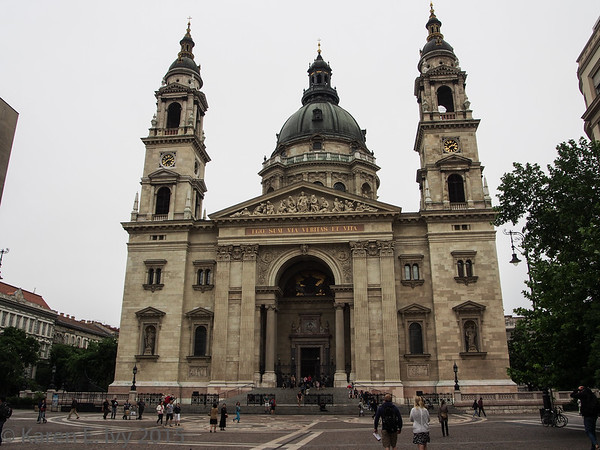 The interior of St. Stephen’s is very heavy, dark, and Romanesque: 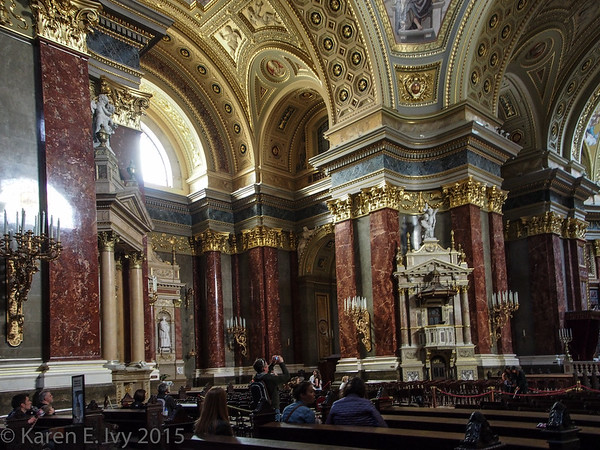 There are a few more interior shots in the gallery.  The cathedral contains something I’ve seen only a few of:  an actual relic of a saint.  Specifically, it is the mummified right hand of St. Stephen, which they take out and carry in procession every August 20.  Here’s the photo I got – you have to give the attendant 50 euro cents to turn on the lights for half a minute. 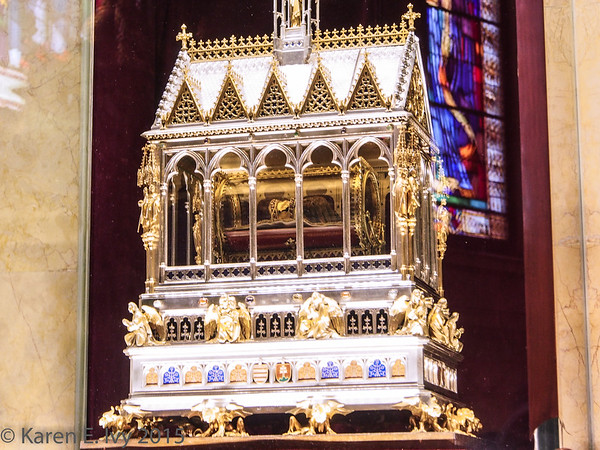 There’s a much better photo in this site, which I didn’t find until I began researching this post:

The Holy Right Hand of St. Stephen, King of Hungary

It also includes some excellent background detail on the hocus pocus, not to mention actual chicanery, that surrounded medieval saints’ relics.  I can’t get the fullsized photo I took into a blog post, so you may want to go find it in the gallery, where you can expand it to full size to see the detail.  It’s on the last gallery page.

After St. Stephen’s, we went back to the bus stop to return to the hotel.  Tomorrow, we sing!