On our second full day in Budapest, we had the morning off, then an afternoon rehearsal with orchestra, then 2 hours off for dinner, and then a performance.  The rehearsal and the performance were all in Matthias Church, on Buda Castle Hill, where the bus can’t go, so when we set out, we had to have our performance clothing with us, and carry it up the hill from where the bus dropped us off.  I mentioned in yesterday’s post that the bus was too big to fit in the medieval streets on Buda Castle Hill.  This also meant that we had to eat dinner on the hill.

Photos for this post are in the gallery More Budapest.  If you’d like to enlarge any of the photos please go look at them there.

But about that morning off:  the Lion’s Garden Hotel was about a mile from Heroes’ Gate, and in the same area there’s Budapest City Park (with lake), the Vajdahunyad Castle (in the park), a huge mineral water bath (which we didn’t visit, sigh), and the Budapest Zoo and Botanical Garden.  We bought transit passes from the hotel and walked over to the main tram line to pick up a car. As we walked, I got the idea that the Lion’s Garden Hotel isn’t in the best neighborhood; the buildings were shabby, with some graffiti.  I remember passing one dingy little door with an inscription in Hungarian of which I only understood the English word “striptease”!

Here’s a view of the park and its lake.  We didn’t really explore the park much, as we wanted to see the Castle. 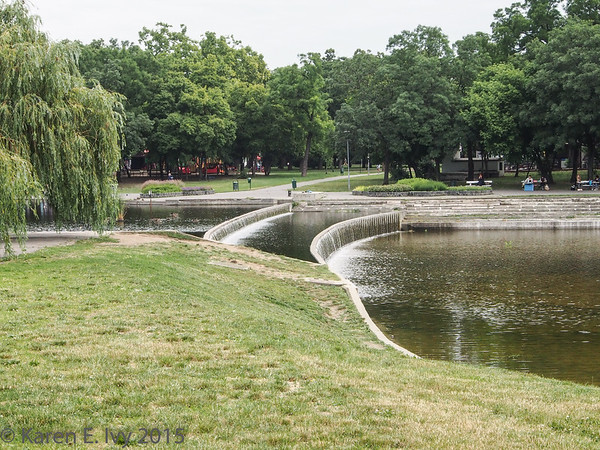 We walked across the lake (yes, on a bridge) to Vajdahunyad Castle, which was built in 1896 as part of the Millennial Exhibition which celebrated the 1,000 years of Hungary since the Hungarian Conquest of the Carpathian Basin in 895.  As it was intended to represent the entire historical range, it has architectural styles ranging from severe Gothic

to curly baroque, all within a couple of hundred feet of each other.  It is, um, startling.

We walked around it and took more photos, which are in the gallery.  The most interesting thing, I thought, was this statue of a seated monk, labeled Anonymus.  I had to wait for nearly 10 minutes for various groups of tourists to finish taking photos of their ladyfriends, sitting on the monk’s lap – you can see how shiny the bronze is. 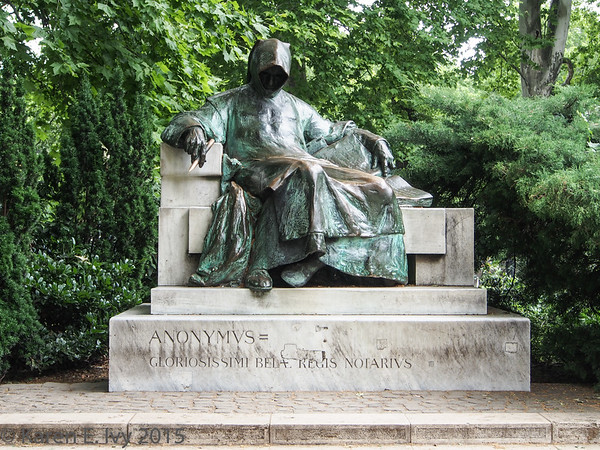 “Anonymous” was a specific person, according to Wikipedia, who lived in the 12th century (his true identity is unknown, but he was a notary of Béla III of Hungary), and he wrote the chronicle Gesta Hungarorum (Deeds of the Hungarians).

The castle grounds also had a statue of Janos Hunyadi, the father of Matthias Corvinus.  I note that Budapest has the same problem with taggers that we have in the U.S.

After walking around the castle, we crossed the city park to go to the Budapest Zoo.  It’s a pretty good zoo, although I have yet to forgive them for all the pelicans with clipped wings, to keep them from leaving the unenclosed lake display.  I like pelicans, it disturbs me to see them not fly.  I took several photos, which I won’t link, but you can look at them in the gallery.  I did take some photos I liked, including the lady feeding the penguins, who were watching – and watched by – a black-and-white cat: 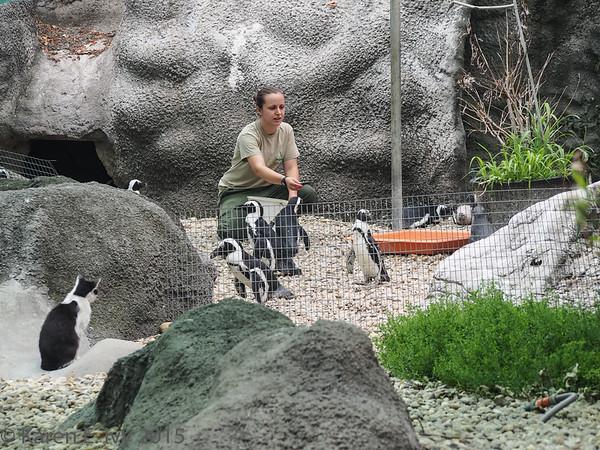 I also got a shot of a truly wonderful anteater – I’ve never even seen one like this before: 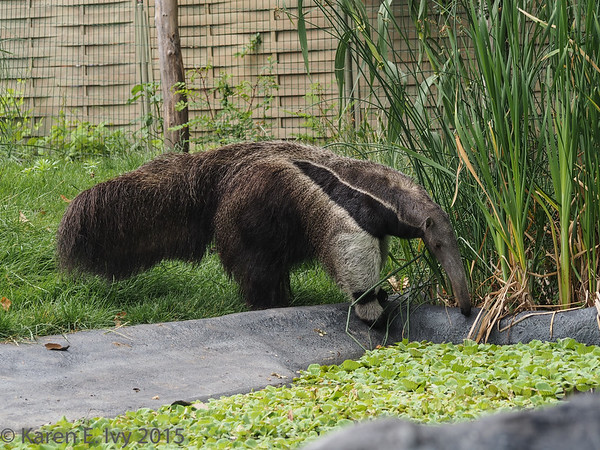 They had one exhibit which was so good I almost forgave them the pelicans.  It was an exhibit of Australian bats and marsupials, and the whole small building was in a dim light, to keep the critters happy.  And the critters weren’t in cages, they were just in the building.  Jim was buzzed by a bat.  I followed some kind of small marsupial up a stair to a higher level.  Here’s a bat, hanging peacefully from a branch near the roof: 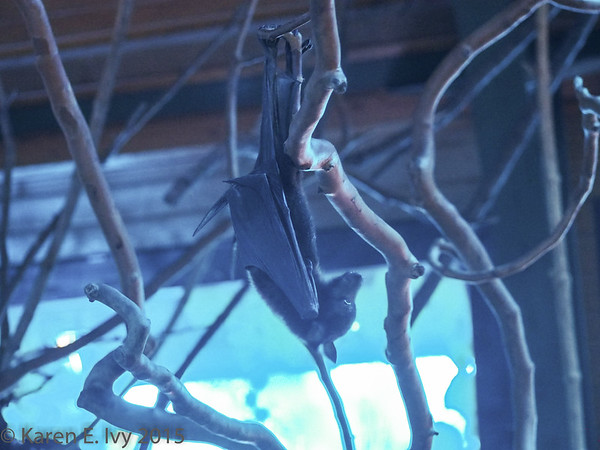 Here are a pair of bats, squabbling on the floor next to a dish full of vegetables.  If they look a little fuzzy it’s probably because they’re moving, it’s awfully hard to get a sharp photo in this light.

And here’s my marsupial, watching me suspiciously from a tree.  I could have reached out and touched any of the critters but it seemed rude, so I didn’t.

The other thing I remember from the zoo is the groups of incredibly well-behaved Hungarian school children, mostly in uniform, walking silently (and fast) in perfectly aligned pairs.  We stood in an intersection like a rock in a stream while a perfect line of pairs of children flowed up to us, around us, and down a side path. I never heard any of them chatter or saw any of them misbehave.

After we finished at the zoo, we went back to the hotel on the tram, including a couple of blocks walk on either end.  The schedule says that “stage set-up” was at 2:30, which probably meant we had to leave at 1:30, with performance gear in hand.  I took no photos during this part of the day; I was much too busy to fool with a camera.  We have pictures, though, taken by my husband Jim Ringland, which you can find in his gallery, Singing Budapest.   I recommend that you go to the link and look at the photos in the slideshow he has set up, you’ll also get several short videos of us rehearsing and performing.  The Matthias Church is absolutely gorgeous, and when Jim and I visited on vacation in 2012, the whole section of the church where we performed was draped in black netting, under reconstruction.  They certainly did a beautiful job.

Here we all are, filing into the Matthias Church for our 3 PM rehearsal: 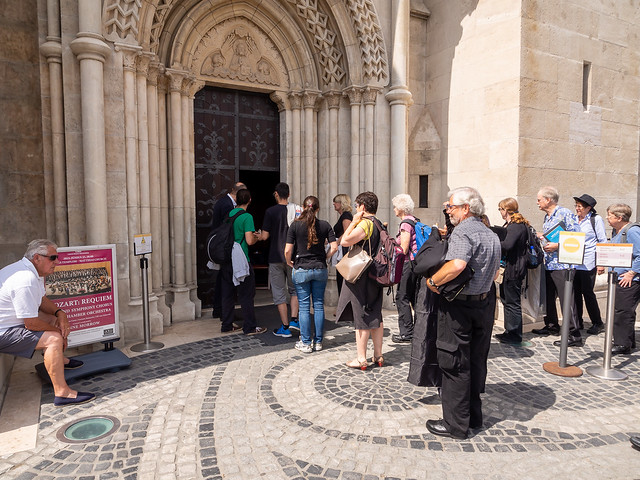 Here we are, rehearsing with the orchestra, watched from the balcony: 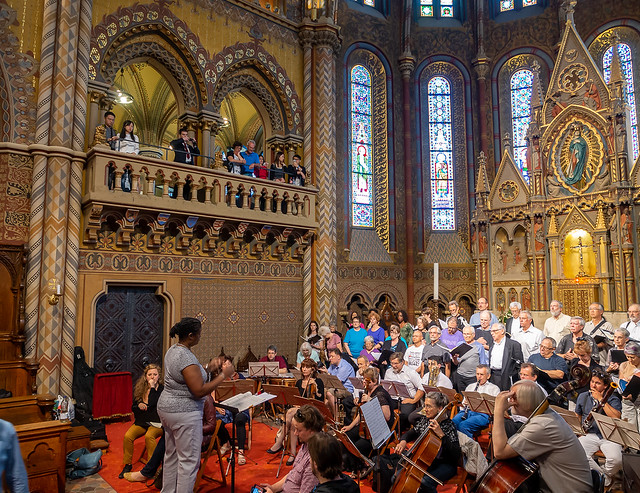 The orchestra, of course, is seated; the chorus, sadly, is standing.  Matthias Church, at least this part of it, has no chorus risers or choir stalls.  So we stood for a 2 hour rehearsal, with no way to sit during the solo movements (except for a couple of people with mobility issues, who got chairs).

Between the rehearsal and the performance we had about an hour and a half to hustle dinner somewhere on the hill.  Jim and I found a nice little bistro, Cafe Miro, about a block from the church.  A couple of the other singers were going to join us until we all learned that the Cafe Miro doesn’t take credit cards.  Jim and I were carrying enough forints to cover dinner, but only for ourselves.  (Fortunately there are other places there which do take plastic; among other things, there’s a Hilton.)  It was a very nice break on a pleasant warm evening, and the food was good.  Then back to the church to change into performance uniforms.

At 8 PM, we performed the Mozart Requiem.  Standing again, for most of another hour.  We only sang the Requiem here, and a good thing too from my point of view.  We were all still jet-lagged, and Jim and I had walked over 4 miles that morning.  I can’t remember another time that I’ve almost fallen asleep on my feet, during a performance.  But I didn’t, quite; and I finished the performance even though my feet were numb.  We were very pleased that the small hall was pretty full, somewhere between 400 and 500 people.  The orchestra was good, the soloists were really good, and we got 4 curtain calls!  And this wasn’t a free concert – we weren’t paid, but the audience paid to hear us, and the gate went to a local charity.  It was very gratifying to hear the applause.

We ended the evening by walking back down the steps to the lower level, to catch the bus and be driven back to the hotel by the inimitable Andy.  (I introduced Andy the bus driver in Back to Budapest.)