The day after our successful concert in Budapest, we packed up, loaded the bus, and set off for Vienna.  This is how a performance tour works.  We had no agenda except to stop in Györ, a small town along the way, for lunch.  I remember a sunny, pleasant day.  The bus dropped us in the center of town, just across from the impressive town hall: 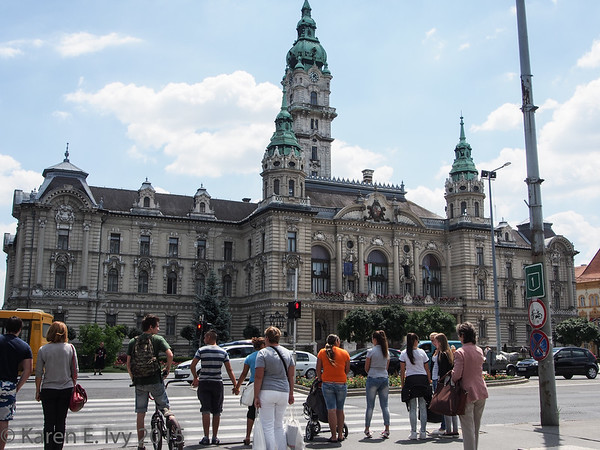 I’m not sure Györ was ready for 70 people who all wanted lunch at once.  Jim and I chose the restaurant in a hotel next to the bus stop.  We and I think one other couple were the only people in there.  The service was fast and pleasant, the food was good.  When we finished, we strolled down the plaza and found several tables of our friends at an indoor/outdoor restaurant, all complaining that they hadn’t been served yet.

The plaza had a couple of statues, of which I thought this was the most interesting.  I’m still wondering who the saint is, and why he’s being adored by a lizard.  Dragon?  Since I don’t read Hungarian, any labels were useless. 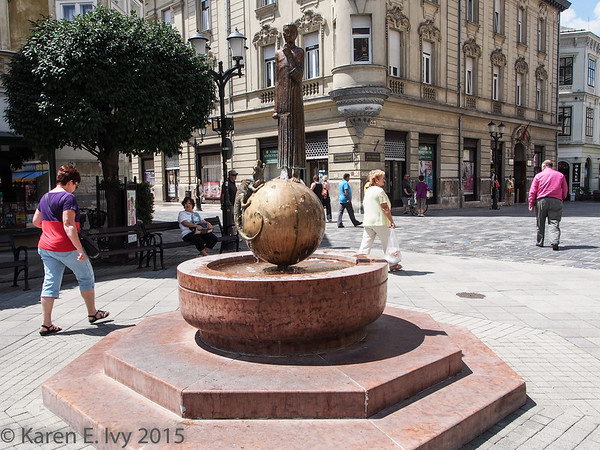 Statue in the plaza, Györ, Hungary

Like a lot of European towns, Györ is built right out to the sidewalk.  On a sunny day, it was very nice to walk through the center of town.  I didn’t see any cars in this area, or any marked parking. 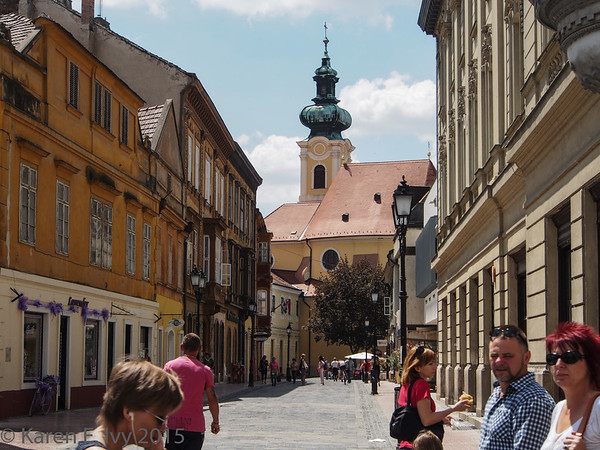 Street and church in Györ, Hungary

After lunch, back on the bus, and on to Vienna – with a rehearsal en route.  Yes, we re-sorted ourselves with all the singers in the rear of the upstairs deck and everyone else sitting downstairs or in front.  Lynne beat time with a tambourine, and we went through The Water is Wide, Songs of Strength and Hope, and the four Haydn a capella pieces, until she was satisfied. More about the Haydn pieces later.  Here’s a video of us, showing the tambourine; it may take awhile to load.  This is from Jim’s site – I was much too busy to shoot videos!  I’m not visible in this, I was farther forward.

In Vienna, we stayed in the Hotel Lindner am Belvedere, probably the best hotel we stayed at.  It was about a mile from the Stephansdom (St. Stephen’s Cathedral), where we performed, so we went back and forth on the bus.  As usual on this trip, the first dinner in a new city was on the tour; the rest of the time, we found our own dinners.  The restaurant was within a few blocks of the hotel, and we walked to it, which was nice.  I remember the streets and sidewalks being very uneven, even when they weren’t actual cobblestones.  The food was good but the restaurant was very “live” (acoustically), which meant it was awfully loud, with the 70 of us all talking at once.