Vienna and the Schönbrunn Palace

The day after the Stephansdom concert, we had a bus tour of the Ring, followed by an organized group tour of the Schönbrunn Palace, then a drive into the countryside to visit Eisenstadt, where Haydn is buried, and Esterhazy Palace, where he lived and worked.  Jim and I toured Schönbrunn Palace in 2012 with the Viking River Cruise, and we considered skipping it; but after a little thought, we realized there would be no way to catch up with the bus to take the rest of the tour.  So we got on the bus with everyone else.

If you want to see more photos on any subject, just click on one that interests you; you’ll be redirected to the photo on either my Smugmug site or Jim’s, depending on the photo, then you can move back and forth in a slideshow to see others.  In every case, there are more photos there than I show here.

Our first stop in Vienna, touring the Ring, was Hundertwasser Haus.  I had never heard of Friedensreich Regentag Dunkelbunt Hundertwasser (born Friedrich Stowasser, I assume the old name bored him).  As Wikipedia will tell you in more detail, he was a Viennese architect, who disliked straight lines and standardization.  Hundertwasser Haus is an apartment house he built.  Just look at it for a minute, and imagine living in one of those apartments.  For all I know they’re very comfortable, we didn’t go inside. 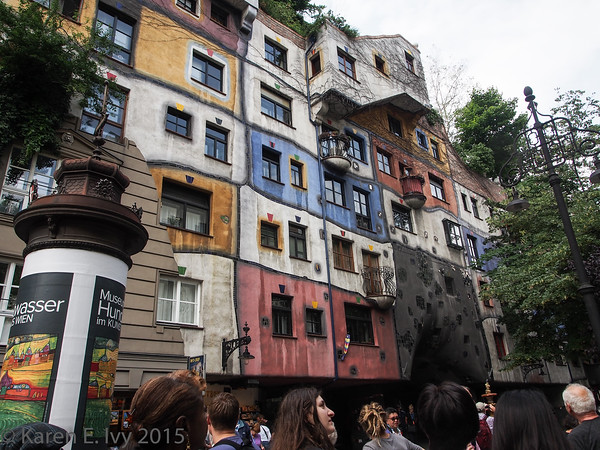 It’s quite the tourist stop, we weren’t the only group there.  Jim got a better shot of the fountain and courtyard entrance than I did.  Hundertwasser really does dislike straight lines. 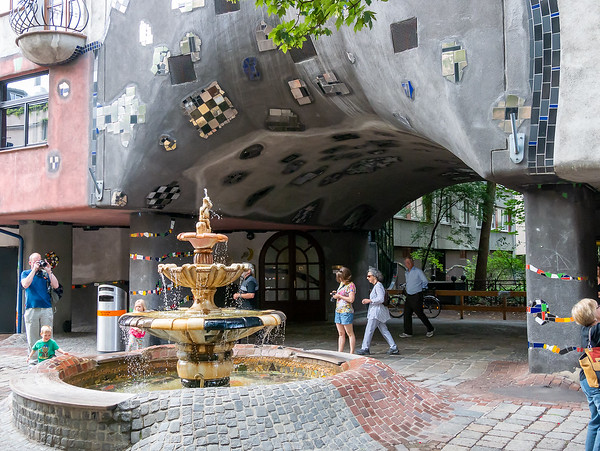 Here’s a picture of us all waiting to board The Bus.  It was very hard to get any picture of the bus, because we were always right next to it, and it’s huge.  It’s black, but here it’s reflecting everything next to it.

The next stop after Hundertwasser Haus was the Schönbrunn Palace. The Palace is so huge that, even at the opposite edge of the huge courtyard, you can’t get a photo of the entire building.  Jim got a better picture than I did.  Consider that about a third of the building extends off to the left of the photo.

At this point, I went into the house for the tour. I didn’t take any photos inside the house; cameras are verboten.  This is standard with a lot of big European palaces and museums.  Our tour with Viking in 2012 was on a weekday, so it was not very crowded, but the chorus was there on Sunday, and the palace interior was a roaring maelstrom, with many more groups than would fit comfortably.  Jim decided to skip it and spend his time exploring the gardens, a wise choice.  Here’s the parterre, leading back to the Neptune Fountain and the Gloriette (the building on top of the hill): 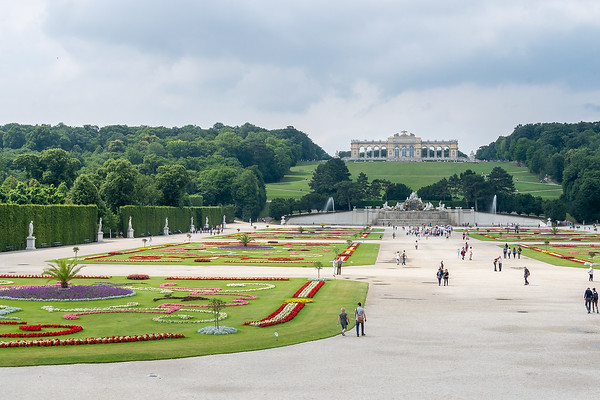 While I was slogging through huge crowds in a palace I had already seen, Jim was having lunch at the Gloriette, being serenaded by strolling violinists in costume!  The Empress Maria Theresa built the Gloriette so she could have a nice brunch and view the gardens; it’s now a cafe, and you can still view the gardens.  Here’s the view of the parterre and the back of the palace from the Gloriette:

Notice the size of the people in the garden.  How to feel like an Empress, hmm?  Jim got a number of gorgeous shots of the garden, which is much bigger than merely the parterre!  The parterre is merely where you strolled around, protected by your parasol, to show off your new dress to your guests.  In fact the parterre is big enough that just walking the perimeter a couple of times would give you a pretty good workout – but 18th century ladies did not work out.

I was wrong that neither of us got a shot of the full Schönbrunn Palace.  Jim got one – from the Gloriette!  The city view includes the north end of the Wienerwald; the church is a local parish church — the 19th century Maria Königin der Märtyrer-Pfarre Rudolfsheim.  In classic European architectural custom, the church steeple is the highest visible point on the landscape. 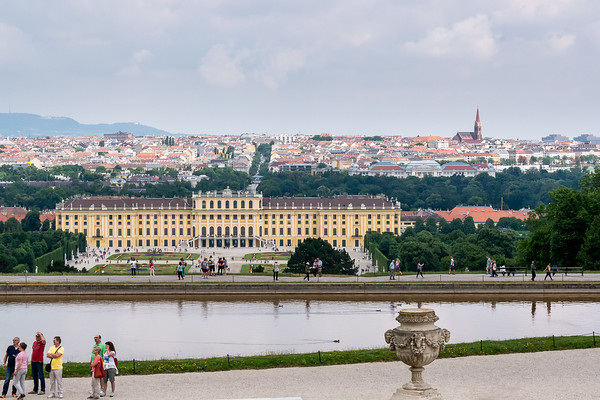 I have to share one more:  the Roman Ruin.  The Roman Ruin was built circa 1778.  It was extremely fashionable in the 18th century to have your own private Roman ruin, and if your estate didn’t have one left behind by the Romans, you could always build your own, in a suitably damaged condition.  Click on the photo for more pictures of the Empress’ custom-built ruins, and other parts of the gardens. 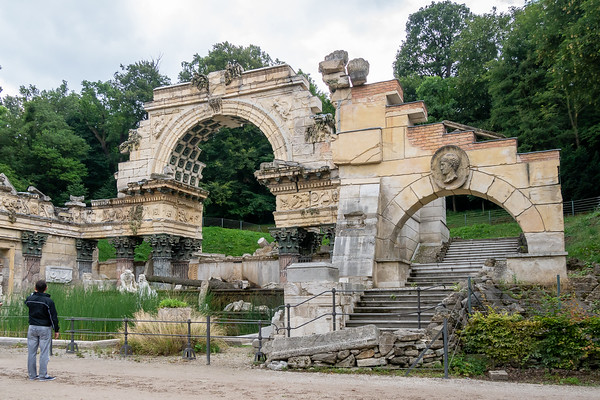 I’ll stop here, and do the tour of Eisenstadt and Esterhazy in the next post.