The date stamps on my photos suggest that the last photo I took at the Schönbrunn Palace was time-stamped 10:53 AM, and the first photo I took at Eisenstadt was time-stamped 2:19 PM.  We didn’t spend 3 hours on the road to Eisenstadt, as I remember grabbing a sandwich at the cafe in the palace courtyard and eating it outdoors; but we may well have spent 2 hours, including collecting, loading, and unloading all 70-odd of us.  Google Maps says Eisenstadt is either 62 or 68 miles from Vienna depending on which road you take.

Music historians will already know why we went to Eisenstadt, but for the less informed (I didn’t know this before the tour), Joseph Haydn is buried in the Bergkirche (which means “mountain church”), in the town of Eisenstadt, which was the family seat of the Princes of Esterházy, whom he served most of his life.  He lies there now, along with both of “his” skulls, and if you’ve never heard that story (I hadn’t), you really must read the Wikipedia article on Haydn’s head.

Our first stop in Eisenstadt, after we found the Bergkirche, was – the restrooms, which were out at the back of the church, and not very large.  Here is the line for the ladies’ room.  All of these women are on the tour. 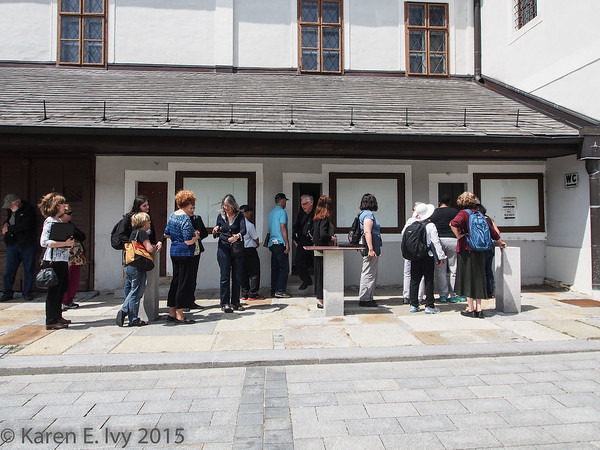 Eisenstadt may be 60-some miles from Vienna, but it is nowhere.  It is surrounded by farmland.  The Esterházys stayed there in the summer; in winter they stayed in their Hungarian estate of Eszterháza, which Jim (who is a music historian) calls “Versailles in the swamp.”  We toured Eisenstadt on a Sunday, and the place was empty.  I don’t think we saw a dozen local residents the whole time we were there, although as we began to sing, a few of them straggled into the church to see what we were up to.  We thought we might have an audience of tourists when we sang, but we didn’t.  The tourists may have been over at Schloss Esterházy, which we’ll tour later.

I couldn’t get a good exterior photo of the Bergkirche. It’s a beautiful building, but I couldn’t get far enough away from it to get even  a wide-angle.  Jim did get a shot – through the bus window, which is why the tree is out of focus. I got really tired of taking photos out bus windows. 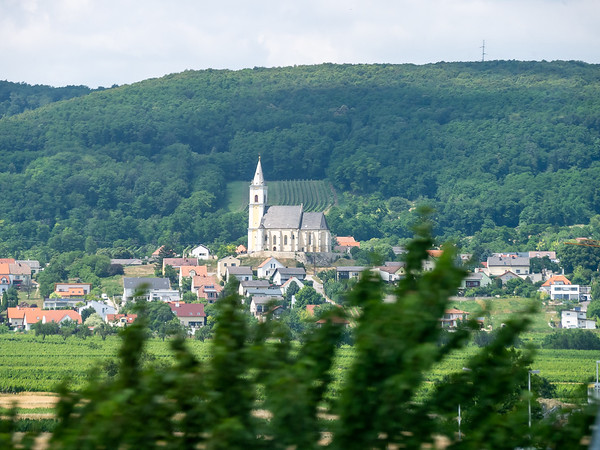 Eventually we all filed into the church, which is quite small and very baroque.  Here’s the broadest shot I got of the interior: 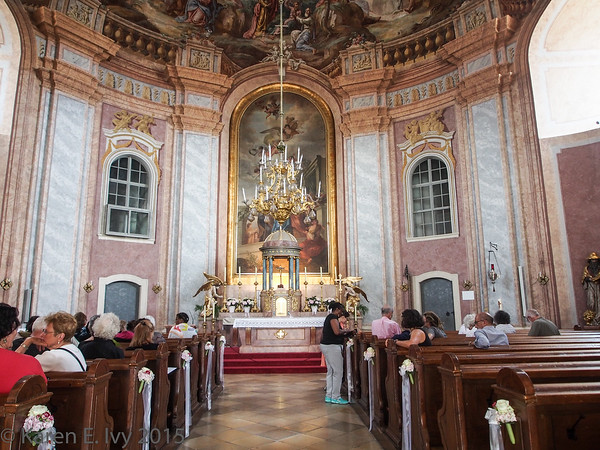 Yes, it really is that small.  In its heyday when Haydn was alive, the congregation was probably the Esterházys and their guests, their servants, and a few villagers.  Jim’s photo gallery on Eisenstadt has a 6 photo composite showing the interior, which I’m not going to try to display in this blog.  Click on the link and take a look.  My gallery (Eisenstadt starts on the 2nd display page) has a number of interior photos of the church.

While we were there, the chorus sang 4 a capella choral pieces by Haydn, which we had memorized.  Then the chamber chorus members sang some American folk songs; finally Lynne arranged us all around the room in a circle, and we sang Where Have All the Flowers Gone? in a 4 part call-and-response arrangement.  Great acoustics.  I don’t have any photos of us singing because, of course, I was singing; Jim’s gallery has videos of us performing there.

We went to Eisenstadt, of course, because of Haydn’s tomb.  Here it is – it’s in its own locked off niche.  There were a couple of engraved tablets in the hall outside the tomb, and you can feel free to go peer at them; but I couldn’t read them at the time (only partly because they’re in Latin), and I just looked and I still can’t read them.

Two hundred and fifty years later, Haydn’s symphonies and masses still give me a thrill, so may he continue to rest in peace – with both skulls.

It’s in the same town, so after our session in the Bergkirche, we visited Schloss Esterházy, where the family lived while in the area.  Here’s the front view of the building: 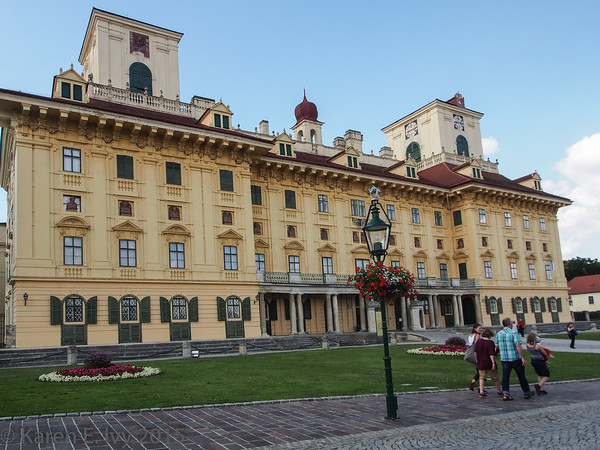 The Wikipedia article I linked will give you the history of the site.  It’s now owned by the Esterházy Foundation.  Jim and I have toured other old “residences” of European noblemen, this was pretty typical.  Behind the facade there’s a courtyard, now occupied by the Haydn cafe.  The courtyard is decorated with some interesting finials:

Our guide told us that the Esterházys, when building the Schloss, were not as prompt at paying as the marble carvers liked; so the carvers put these weird faces on the ends of the beams, to remind the Prince (or, at least, his overseer) that he owed them money.  After going through a couple of rooms, decorated with elegant plaster work and a few family portraits, we came to the Haydnsaal, which is a sizeable performance space and was being readied for an upcoming musical production, we never found out what.  Here’s the ceiling: 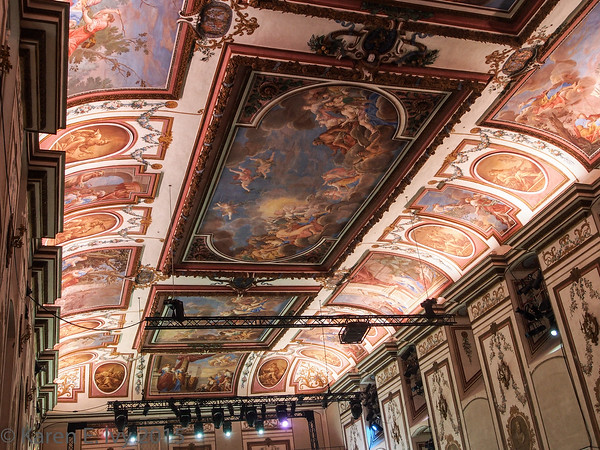 And here’s a more general view of the room, with its elegant red velvet seats:

I didn’t take many more photos at Esterházy, there are a few in the gallery showing some furniture (including a clock and table decorated with Murano glass), and part of the family’s huge dinner service.  There was a huge silver service which neither of us photographed.  There were no big paintings; the guide said an Esterházy prince in the 20th century got into debt and had to sell the paintings to pay off his creditors, a problem faced by more than one aristocrat over the centuries.

There was also this useful little extension to a guest room:

Okay, I have a crude mind.  Yes, that’s a baroque style porcelain toilet, with wooden seat, and since the first workable flush toilet was patented in England in 1775, this could indeed date back to Haydn’s day, although it could also have been installed any time in the 19th century.  The guide had no information on when it was put in.

Jim did much more photography in the estate grounds than I did, and I encourage you to go look at his photos.  Here’s an example, click on it to see more: 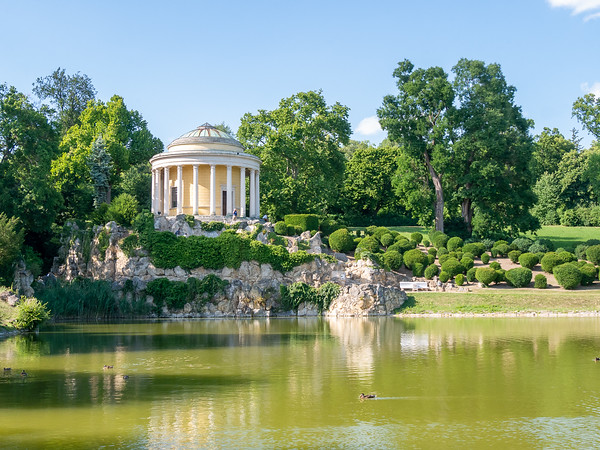 After we left Esterházy, the bus took us out to “dinner in the Vienna woods,” which was nowhere near Vienna and greatly overrated as dinner.  I concede that it’s hard to feed 70-odd people all at once.  There was a lot of wine, though, and everyone had a good time, even those of us who didn’t drink.  Then back to Vienna, and in the morning, off to Prague.

This entry was posted in Photography, Vacations and tagged Oakland Symphony Chorus Tour 2015. Bookmark the permalink.