We all packed up again, piled into the now familiar black bus, and hit the road for Prague.  I was surprised to find that, once we got out of Vienna, we were largely traveling on secondary roads – well paved and all that, but not freeways.  This gave us a better look at the countryside, and the countryside between Vienna and Prague is gorgeous. It’s some of the most beautiful, immaculately maintained farmland you could imagine, and almost all rural.  The photo below is just across the Czech border. (As always now, clicking on a photo will take you to the full Smugmug gallery.)

Czechia (the new name for the Czech Republic) had more woodsy areas interspersed with the farms.  But I kept wondering about the road, until someone reminded me that, until the Soviet Union fell, Czechoslovakia (as it was then) was behind the old Iron Curtain, so you can drive from Vienna to Bratislava on a highway (Slovakia was not Soviet), but to Prague, you take back roads because nobody’s built the highway.

We made a modest stop at the Czech border – the Czech police pulled the bus over and asked to see everybody’s passport, or so the guide told us.  (I did see the police interviewing another driver behind us, a little while later; they must have been looking for someone.)  We all dived for wherever we’d put the passports, and the guide got off the bus, then shortly came back and said, no passports needed, she had convinced the police that we were just a group of traveling Americans. Then she said, oh, in case you need Czech money (korunas), there’s a currency exchange place here.  You can see the line of customers, all from the bus; some travelers apparently don’t get their foreign currency before they leave home.

The more I thought about this, the smellier it got.  Your best foreign currency source is always a U.S. bank, preferably your bank, and Jim and I had korunas we’d brought with us.  As you can see, the place was a shack, holding at most 2-3 people, in the middle of the countryside, near a sort of outdoor tchotchke market called (in English) the “Asia Shopping Center.”  No town visible.  I suppose the shack might serve the tchotchke market; but it’s certainly going to charge the highest fees going for the transaction.  Frankly, I suspected our guide of having a side deal with the currency vendors; I still wonder about it.  As I looked around, though, I noticed something else, parked in the middle of beautiful fields of crops, which would certainly encourage people to get korunas: 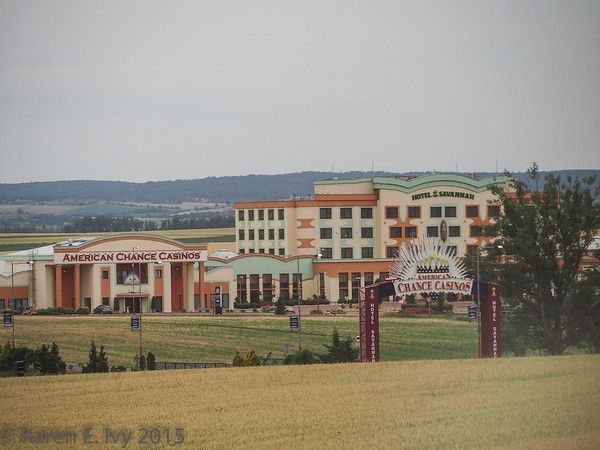 Yes, that says “American Chance Casino.” In English.  As close to the border as it can get.  Clearly a tourist trap.  As a resident of California who regularly travels to Nevada, this tells me that Austria doesn’t allow casinos!  For that matter, the Asia Shopping Center, also in the middle of nowhere (right across the road from the Casino), suggests that sales taxes may be lower in Czechia than in Austria, and the ad for Feuerwerks suggests that Austria may not allow sale of fireworks. 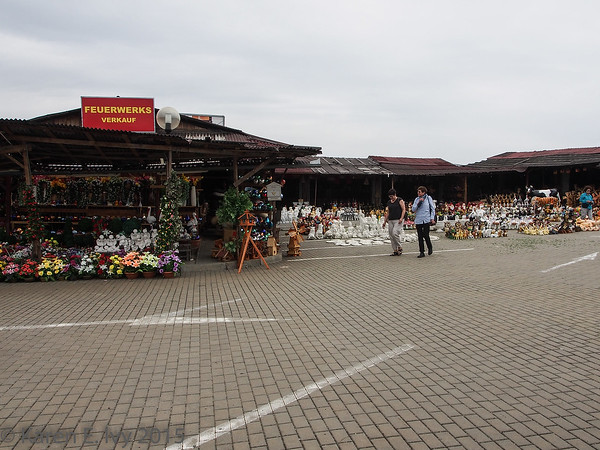 I still think the casino would have had an in-house currency exchange operation.  It did have a play area for the gamers’ children, complete with at least one bouncy house and a large plaster dinosaur.

This was also the point at which a couple of travelers suddenly realized that their passports hadn’t made it onto the bus.  At this point I have to give our Executive Director, Steven Payne, his combat medal.  He phoned for a taxi (which took forever to come), and drove off to the nearest train station where he could ride into Vienna.  He returned hours later with the passports and a woman’s performance dress which somehow hadn’t got packed!

Eventually we moved along, having our in-transit rehearsal on the top deck of the bus, and stopped at the charming little town of Telč (pronounced “telch”) for lunch.  We parked the bus outside the town and walked in past some older buildings and a lake, with ducks (invisible in this shot but there are more photos in the gallery, click on the photo of the lake). 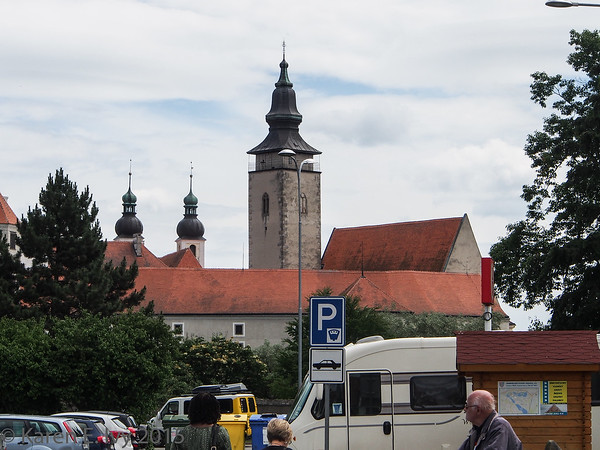 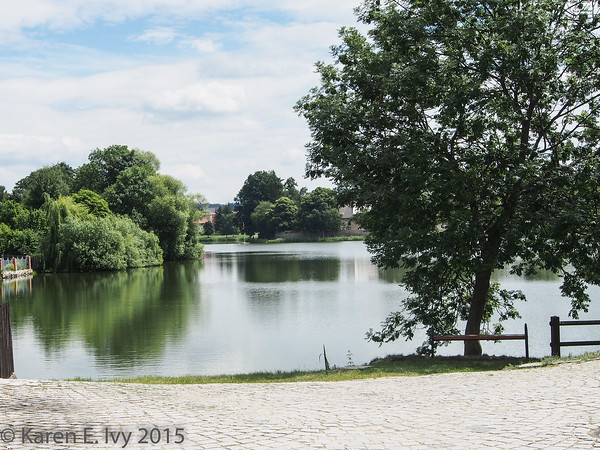 Jim and I had a lovely lunch, all by ourselves – we stopped at the first restaurant we saw, on the edge of town, and found ourselves the only tourists in the place.  Everybody else trailed all the way into the town square and fought for tables at the restaurants there.  Feeding 70-odd people all at once is not trivial.  Telč was a walled town; here’s the old city gate, followed by the town square. 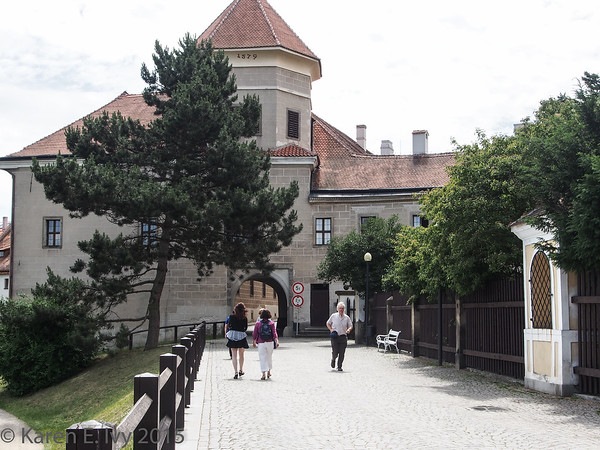 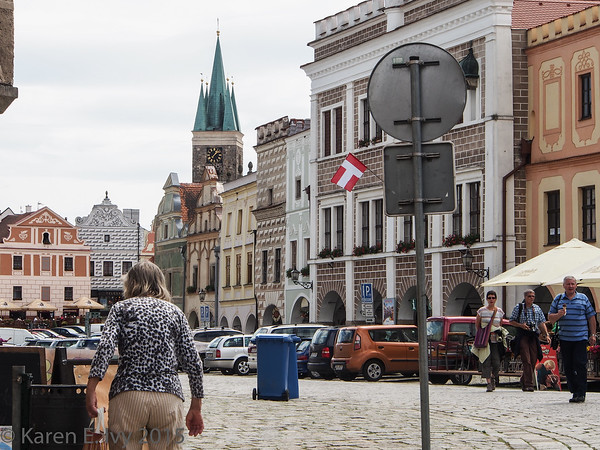 And here’s one of the local restaurants trying to feed 70 English speaking Americans all at once:

You may have noticed that some of the buildings in Telč are different colors.  We saw this all over Czechia.  Here are some more: 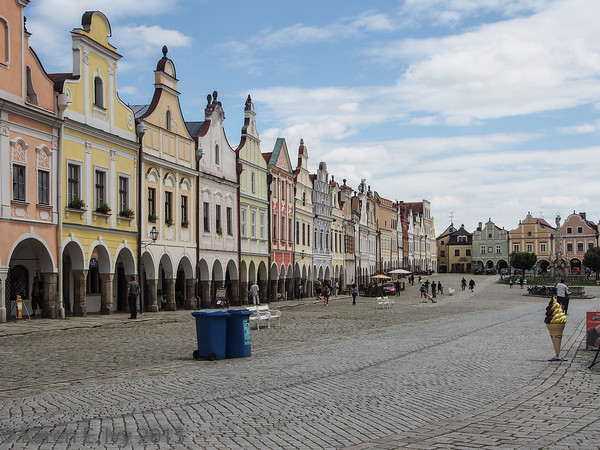 One of the local guides we dealt with in Prague told me that, back under the Communists, all the buildings were grey, and almost immediately after the Communist regime fell, people started painting the colors back.  I can’t swear to this, but it’s a great story, let it stand.

On the way out of Telč, we passed the oddest wall clock I’ve ever seen, which I must share.  If any of my traveled friends knows why the Czechs would have a clock like this, I’m dying to hear it!

After lunch we rolled on through into Prague, trading rural splendor for suburbs and finally, city.  Like many old European cities, the streets in Prague were built for horse-drawn vehicles, not 45 foot double decker buses holding 4 people abreast.  Here’s the street where Andy the driver dropped us off at the Hotel Majestic (no, really!), without a nick or a ding, and despite a driver who came up the street in the opposite direction and tried to pass him: 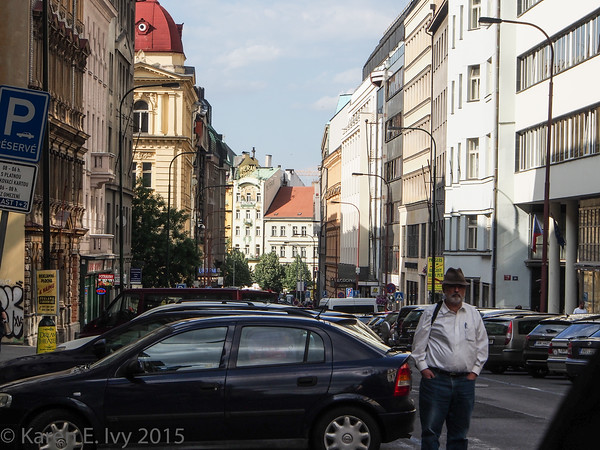 All I can say is, you try it.  The angry driver finally gave up and backed down the block.

I was totally gobsmacked to find that the Hotel Majestic was – a Best Western!  I didn’t realize they had a “premium” line.  It was a very nice hotel, though, on this trip second only to the Lindner in Vienna.