July 1 was our last full day in Europe.  Could we sleep in?  No way – the bus to the Prague Castle, where we had guided walking tours set up, left at 8:30 AM.  And yes, I’m willing to get up early to tour a medieval castle dating back to the 9th century (rebuilt multiple times, of course)!  In fact, we didn’t get into the Castle at all; we spent most the tour of the hilltop in St. Vitus’ Cathedral, a Gothic building.  The first interesting thing I saw was this wall: 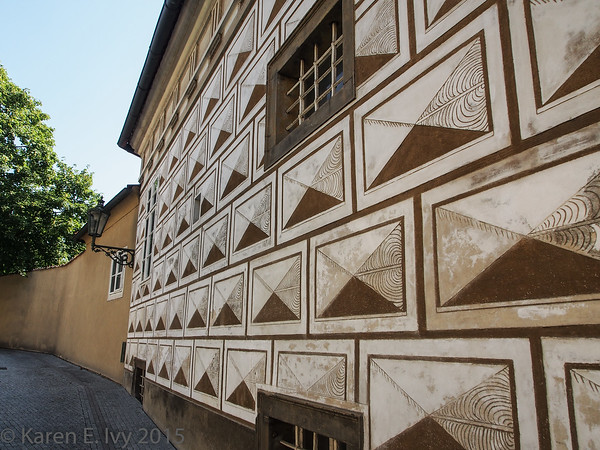 Yes, it’s an optical illusion – no matter how it looks, that wall is flat.  It’s etched in a technique called sgraffito, to give the impression of a wall decorated with diamond-shaped plaques.  It’s flat.  I put my hand on it.

Here’s our first view of St. Vitus Cathedral.  I don’t know why cathedrals in east central Europe have those checkered tile patterns on the roof, but I saw it in Budapest and Vienna, and here in Prague – but not in Cologne (which we visited in 2012).

Like most medieval buildings, especially on European rivers, the cathedral and castle are on top of a hill.  Military defense aside, when the Vltava River floods, everybody can scramble up the hill and take shelter in the cathedral, the castle, or both, until the water goes down.  The brown slanted surface you see below the cathedral is the roof of a building in the sort of dry moat area below the cathedral.  The guide didn’t mention it.

Our route into the cathedral took us first into this courtyard. The round white building is the Treasury of St. Vitus Cathedral, one of the most extensive church treasuries in Europe.  If I’d known that  I would have tried to go in, but our tour didn’t give us much time there.

You may recall from earlier posts that I like gargoyles, and collect them; here are the gargoyles from St. Vitus Cathedral.  Remember, these things are downspouts.  In the rain, they spit out water draining off the roof.

I got one good photo down the nave, the classic cathedral shot.  Click on any of these photos and it’ll take you to the full gallery, where you can see photos of some of the stained glass windows, and a detail of an odd interior stairway.

Here’s the full exterior view of the Cathedral, both towers, and the “Golden Gate”:

The Golden Gate is worth a closer look; the west door, which is in the gallery, is classic Gothic, with pointed arches and detailed relief carvings.  The Golden Gate is a gilded mosaic of the Last Judgment, looking more like a Russian icon than like a medieval cathedral entrance.   It dates from the 14th century; the mosaics were restored in the 1970s by the Getty Conservation Institute.  The Golden Gate was the royal entrance to the cathedral, immediately facing the old Royal Palace across the plaza.

Look again at the photo of the entire cathedral and you’ll see that the portion to the right of the Golden Gate is almost black, the whole building exterior.  That’s part of the original building – the black represents centuries of smoke from the entire city of Prague.  The mosaics on the Golden Gate probably looked like that before the Getty Institute took them on.

I did like the statue of St. George and the dragon, in the castle courtyard.  I normally associate St. George with England, but I guess he traveled more than I realized.

Leaving the castle area, you encounter Prague Castle’s main gate, the Mathias Gate, which actually faces the other way; we came out through them.  Here’s what you see from the rear:

These statues are described as “sculptures of Titans, made by I. F. Platzer in 1770.”  There are better views of the individual statues in the gallery.  Here’s the view of Prague, from the castle plaza.  Notice the haze, which wasn’t that bad at ground level.

I think I’ll stop here and start another post on the next part of the tour.