Most of Prague, of course, is thoroughly modern.  If you leave the castle plaza on foot, though, you can walk down the New Castle Steps.  According to Waymarking.com, the New Castle Steps date to the 13th century, and paradoxically are older than the Old Castle Steps.  However, they don’t give a date for the Old Castle Steps (and since I don’t read Czech, my research was limited).  Here we are starting down the New Castle Steps, which have 220 steps and are 160 meters long.  I believe the little indented windows on the castle wall are arrow slits but I could be wrong.  I’d expect an arrow slit to be broad on the inside of the wall, where the archer was, and then narrow down to a small slit in the outside wall where the arrow could go out.  These are the wrong way round, if they’re really defensive. 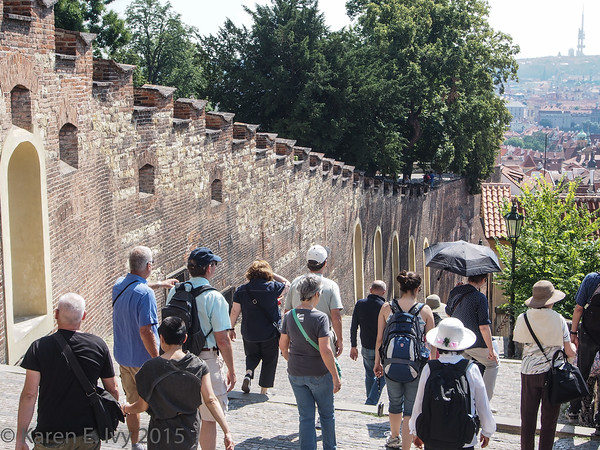 Here we are looking down the steep part of the stairs.  They built right up to the edge of the staircase, didn’t they?  Imagine living in one of those buildings.  There are a couple more photos of the staircase, and buildings along it; click on any photo to get to the full gallery.

I particularly like this photo of the bottom of the steps, with all the cars parked at the foot. I have no idea how they got those cars in there in the first place; and I’ve walked the streets in the area.  There was a chocolate shop at the bottom but I didn’t manage to get into it.

There was probably a medieval village at the bottom of the castle stairs in the 13th century, but these buildings are much later, although probably not modern.  Click on any of these photos to see the full gallery, which has other photos of the area.

Since we were just touring, we walked on to see more of Old Prague, starting with the Jesuit church of St. Nicholas.  This is in the Malá Strana (Czech for “Little Side (of the River)”), also known as the Lesser Town of Prague.

We didn’t tour the church, although I took a photo of the Plague Column, which is also called the Holy Trinity Column. You’ll find plague columns in many major European cities which existed in the mid-14th century. They were usually built later, by citizens grateful that the plague was over.  The Holy Trinity Column was begun around 1715 and built out over the next 60 years or so.

Since we were on the “little side”, the next step was to cross the river Vltava (the Moldau in German) to the big side.  This is the gateway to the Charles Bridge.  Yes, it’s fortified; bridges were part of the city’s defenses.  The bridge was built during the late 14th century, beginning in 1357 and finished around the beginning of the 15th century.

Medieval bridges were often centers of commerce – that is, people had shops on them.  You may have seen paintings of medieval London Bridge, which by 1358 already had 220 shops built on the bridge!  The Charles Bridge doesn’t seem to have had that kind of commerce historically, but when we crossed it was well supplied with tourists, people selling souvenirs, a lady drawing sketch portraits, and a number of musicians. 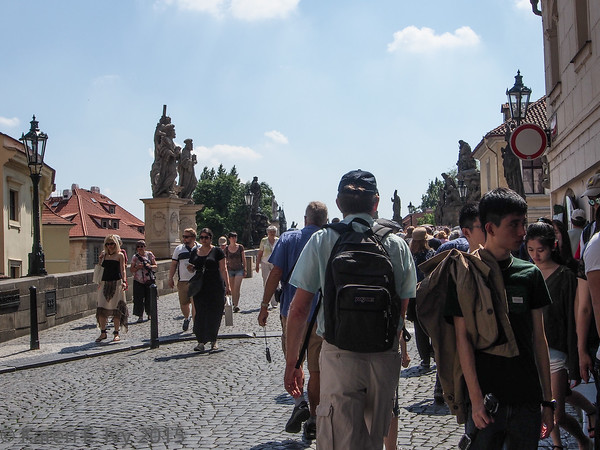 I was a little startled to hear, and see, the man playing the didgeridoo.  A little later he took out a nose flute and played that, but I didn’t get a photo. 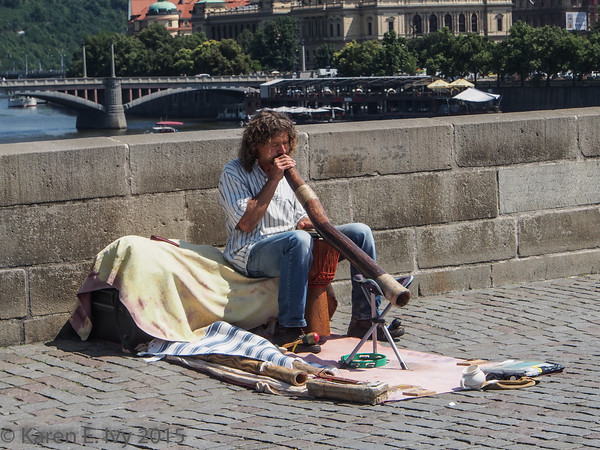 We also passed a couple playing a surprisingly good rendition of Summer from Vivaldi’s Four Seasons, on one violin and an accordion!  Charles Bridge is also lined with statues, now all replicas; the originals are in the National Museum.  Here’s probably the most famous, St. John Nepomuk:

From the bridge you can also see little side streams, some of them with boats, all of them with houses built right down to the water.  You also get various views of the Vltava (a big river) and the city of Prague; here’s my favorite.

The gallery has many other photos of old Prague, but I was totally fascinated by the astronomical clock!  This is in the Old Town Square, where it was first installed in 1410 – it is the third oldest astronomical clock in the world and the oldest one still operating.  An astronomical clock in Czech is an orloj.  Astronomical clocks, in addition to the time, display the positions of the Sun and moon, based on Ptolemaic astrology and pre-Kepler epicycles; it assumes the Sun and planets orbit the earth.  The Wikipedia article has a lot of detail on the history and construction of the clock, and I recommend it.  Here’s the whole clock.  The gold lower dial shows astrological symbols.  There are detail photos in the gallery showing the individual statues, and the gold rooster; click on this photo to see them. 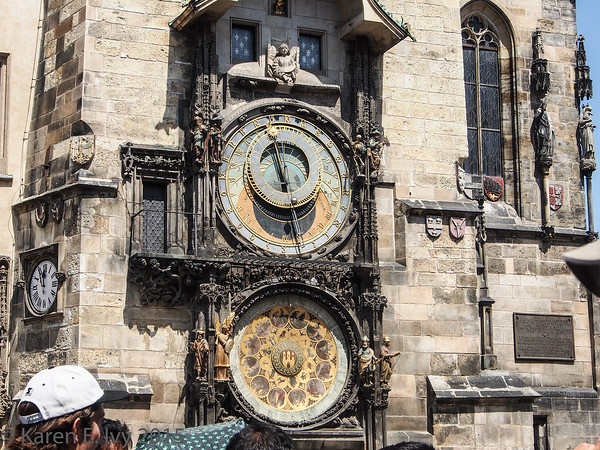 When the clock strikes, it’s a major show, and people stand around to wait for it.  The plaza was quite full.  A clockwork skeleton rings a bell to mark the hour, and nods his head, while the 2 blue doors above open to show the 12 Apostles passing by.  Meanwhile, the clockwork statues on the side of the clock (a miser, a dandy, and a musician) all shake their heads, to show that memento mori means nothing to them!  When Death is done striking the bell, the gold rooster crows (it’s above the blue doors)!

We went, of course, to see it strike noon, for the most action.  Unfortunately, the day we were there, the city of Prague chose to test their emergency siren system at noon, and it howled for over a minute; we couldn’t hear the clock at all, and I didn’t get a photo because I had my hands over my ears!

We had lunch and prowled the town square a bit, and I was startled to see a familiar image: 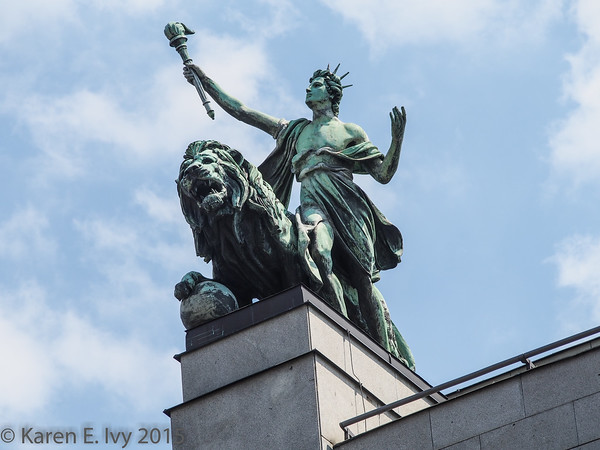 Yes, that is Lady Liberty, with her torch, riding a lion!  For no reason I could figure out, it was on the roof of the Ćeská Národní Banka.

We toured the Church of our Lady Before Tyn, where the guidebook said Tycho Brahe is buried, but between the Czech language and the church’s odd arrangement for visitors, we never found it. 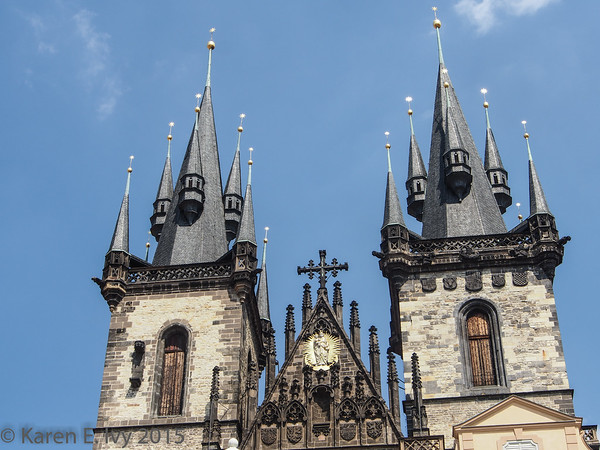 We spend the evening in a dinner cruise on the Vltava, where I didn’t take the camera; I tried with my phone but it was not up to night shots from a moving boat.  Oh, well.  It was an amazing trip, and by then I was truly ready to go home!

This entry was posted in Photography, Vacations and tagged Oakland Symphony Chorus Tour 2015. Bookmark the permalink.