A Night on the Train

As happens too often, I’m a year late blogging this vacation.  Oh, well.  My plan this time is to blog 2 years in parallel, but we’ll see.

In 2016 we decided we hadn’t visited British Columbia in a while, so we set up a trip.  I was happy to learn that my friends Janet and Wes, who’ve lived up there since something like 1979, would be available if we came by on the dates we had in mind.  But our trip began unusually.  Instead of driving or flying, we decided to take the train – we booked a “bedroom” (a gross misrepresentation!) on the Coast Starlight, overnight from Oakland to Seattle.  The train was supposed to arrive at 9:30 PM; it was half an hour late and then we were off.

We foolishly assumed that the “bedroom” would hold all our luggage; wrong.  It’s a good thing I packed the necessities at the top of the suitcase, because we had to store it down the car in a storage area.  I’d never seen a train “bedroom” before – mind you, this is the large one, with 2 bunk style beds.  Here’s an Amtrak photo of a bedroom on the Coast Starlight: I saw a publicity post that said a bedroom holds 4 adults and their luggage; not on this train.  Of the 2 sleeping places (“bed” is an overstatement), the lower one is made by pulling the seat backs down flat, and the upper one by pulling down the slanted panel above them. It has a ladder that a very agile person can climb to get up to it, and comes with a sort of net that you clamp into place to keep the sleeper from falling out.  Both beds have the smallest foam mattress pad you’ve ever seen (installed by the steward, who sets up the beds), and one blanket each.  I slept in a nightgown and a housecoat, and wool socks.  It was not well heated.  When the beds were made up, the space between them and the shelf to the right is just barely wide enough for either of us to get through.  You have to go through that space to get to the bathroom (a shower with a toilet in it, under the shower head).

The train made all the noises you’d expect a diesel train to make.  One of the hand-basin faucet handles was loose, and jingled constantly, until Jim climbed down from the upper berth and wrapped a sock around it.    Leaving the Central Valley, the train climbed an endless rail switchback, which rocked the beds back and forth, left to right, every time it went around a curve.  I never realized how much a train rocks when it goes around a curve.   First my feet were higher than my head, then vice versa, back and forth.  This was about 2 AM.  Once we got up and had breakfast, and were walking around, it wasn’t so bad as at night; but by the time we got to our hotel in Seattle the next night, we both had massive vertigo (train legs?), which fortunately went away by the next morning.  The train motion was so rough I couldn’t write in my diary; all my notes were written either before we left, or in Seattle.

Taking photographs from a moving train is an iffy proposition.  The windows tend to show reflections from lights inside the train.  The train of course is moving, which means anything close will be out of focus.  And trains tend to jolt unpredictably.  Still, I did get a few photos while traveling, including a really good one of Mt. Hood (always photogenic!) and the I5 bridge:

You can see one or two other photos I took from the train at my photo gallery Heading North.  That gallery also has the photos I took in Seattle, including some shots of Seattle’s gorgeous train station: 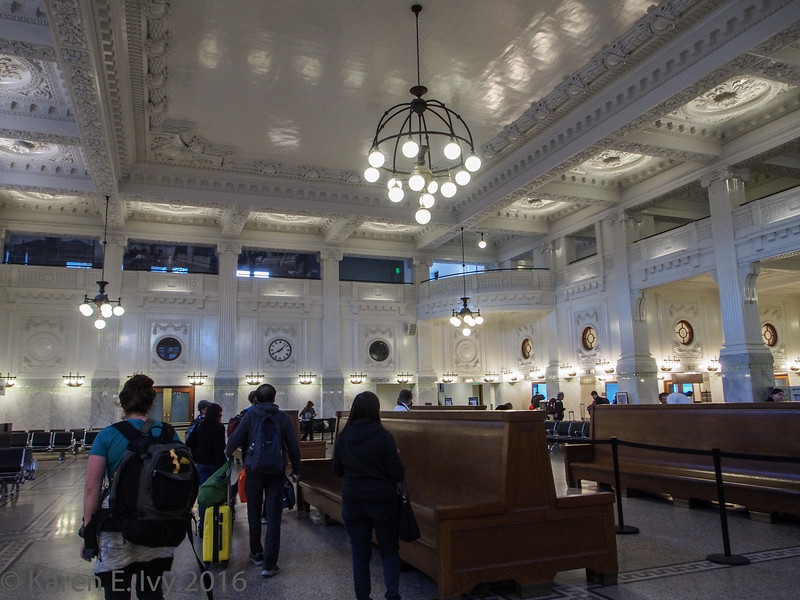 I liked the fact that the restrooms were labeled, “Family and Men”!

Since the train got in at around 9 PM and the Victoria ferry leaves Seattle at 7:30 AM, we stayed overnight in Seattle to get some sleep in a stationary bed.  I did a little shopping, and we spent some time at the Seattle Aquarium, always fun.  My favorite Seattle Aquarium critter wasn’t inside the Aquarium at all, it was on the sidewalk outside, a very handsome statue of  (I think) a squid.  If you know that it’s something else, please tell me!

I’m also quite proud of my photos of shrimp, because the lighting in their tank was almost nonexistent!  Kudos to my new Olympus EM-10 Mark II camera, which is very good in low light without flash!

Next morning, and next blog post, it was on to Victoria!

1 Response to A Night on the Train