On to Powell River

Janet, a girl I went to high school with in Napa, California, married in the late ’70s, and she and her husband Wes moved to Powell River, British Columbia, where they stayed and raised 2 children.  When we’re in the area, we often go to visit them, and so in 2016.

Where, you ask, is Powell River??  Well, it’s on the B.C. coast, just north of the “Sunshine Coast” (which I normally associate with rain).  From Vancouver it takes 2 ferry rides and about a half day driving.  From Victoria, still a half day driving but only 1 ferry ride, from Comox to Powell River.  It used to have a paper mill (Macmillan Bloedel), but that closed; now it’s mainly tourism.

Here’s the view across the strait from the Comox Ferry terminal, waiting for the ferry: 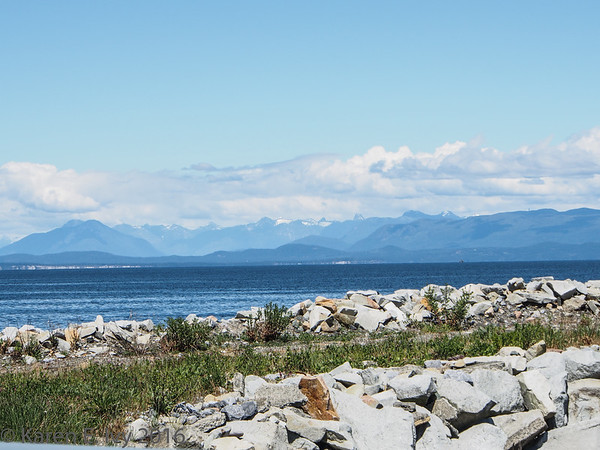 The ferry looks like a ferry; there’s a photo in the gallery, to see the whole gallery click here.

Most of the people waiting for the ferry were doing so down by the beach: 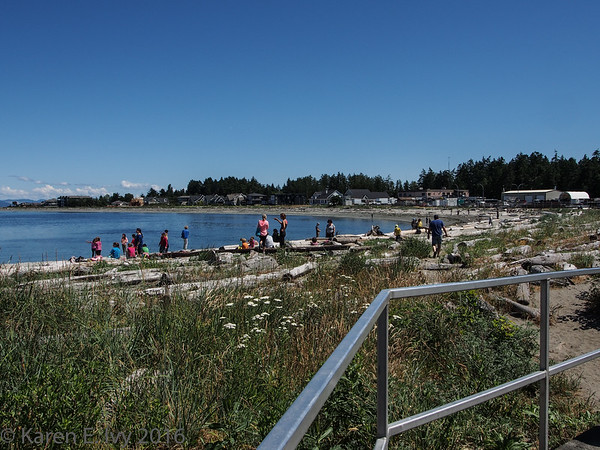 Our friends have lived in the same house in Powell River essentially since they moved there, and this is the view from their veranda: 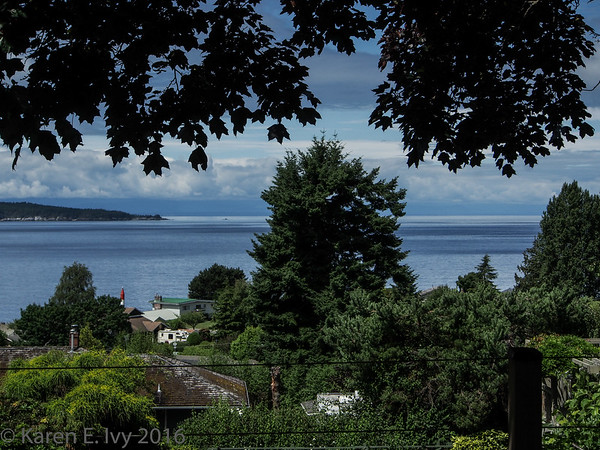 We spent a long weekend with them, and they kindly let us do laundry in their washing machine!  They’d also set up a real treat for us – tickets to an international music festival going on in town at the time.  I’d never heard of PRISMA before (Pacific Region International Summer Music Academy), it is a competition for advanced students of classical music who want to perform in professional orchestras.  It’s sponsored by BC Ferries!  I was totally blown away by the talent we saw; and, of course, I have no photos, because when they say “no photography during the concert,” I put my phone away!  But I really enjoyed those 2 concerts.

We spent a day driving and walking around the area.  That’s Janet to Jim’s left and Wes to his right.

Looking at a totem and a plaque about an old midden

There’s a photo of the plaque in the gallery.  This is right in Powell River, on the seafront; Jim is facing south.  Here’s a little bit of the coast just south of where we’re all standing – I’d hardly call it a beach:

After poking around town, we drove to Inland Lake (which, surprise, is inland) for a picnic and some wandering around – “hike” is probably too strong.  We had lunch here at Haywire Bay (I’d love to know how it got the name):

The drive there wasn’t long in miles, but it took quite a while, as the road was awful.  Also, I suspected Wes was deliberately aiming at the potholes – he may just need to have his shocks looked at!  The lake is very scenic, and well supplied with dead trees and snags.  Check out the gallery for more photos of most of this. 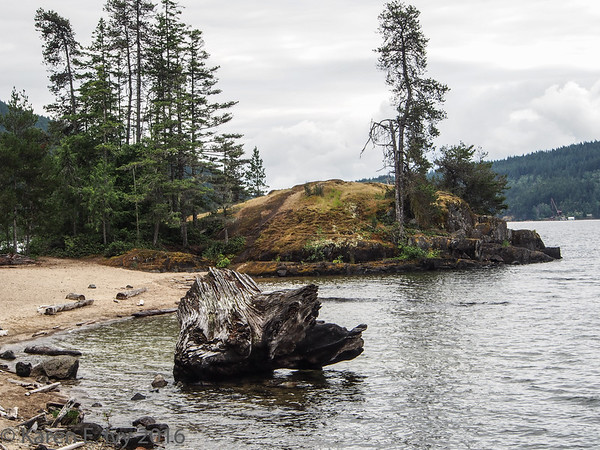 There’s also a local school right on the lake, which must be fun to attend, given that access road.  I’m so proud of myself – near the school I got a photo of a bee in a flower (only a little out of focus)!

Eventually we drove on up the coast, stopping briefly to look at Dinner Rock, the site of a famous shipwreck.  Here’s Dinner Rock, the island behind the plants on the right, and the explanatory sign: 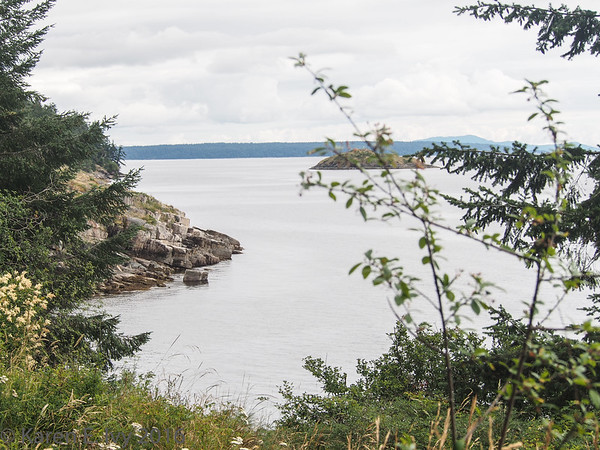 The Dinner Rock stop was enlivened further by a group of solstice celebrators, who were there by the ocean on Sunday (because they all had to work Monday!).  They were very nice and we chatted with them.

We also briefly explored Okeover Arm Marina, which has a nice restaurant, the Laughing Oyster, where Jim and I once ate dinner.

We didn’t eat at the Laughing Oyster, though.  We drove on up the coast to the end of the road, and ate on the deck at a restaurant in Lund.  Lund really is the end of the road – everything north of it is restricted wilderness and First Nation country, and you can only get in by boat or light plane. 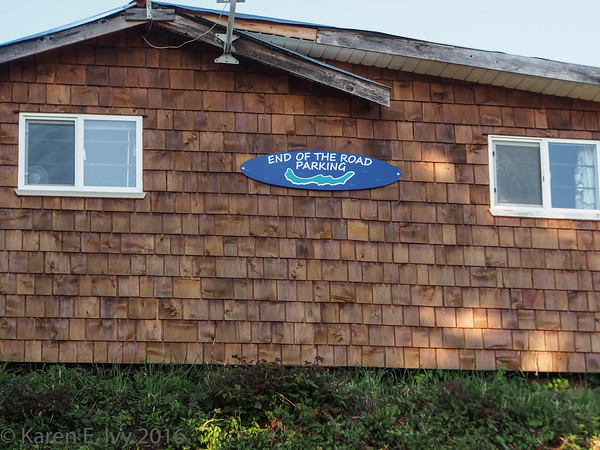 Our visit also included a day where we separated by gender – Janet and I took another hike by the lake, and Jim and Wes went down to the southern coast of the area to do some more serious hiking.  Wes also treated Jim to an extended rant on the evils of farmed salmon – the salmon farms in their area are notorious for the pollution they create.  Since we never buy farmed salmon, Wes still speaks to us.

After this it was on down to Vancouver, but that’s another post.