I haven’t mentioned the b&b we stayed at in Vancouver.  The West End Guest House was fascinating.  Built in 1906, it’s very central, between the center of the city and Stanley Park; you can walk to Robson Street for shopping and dining.  When we were there it was run by a young gay couple, and while I think they were in the process of refurbishing it (my diary suggests not everything was perfect), it now gets 5 stars from TripAdvisor.  And the breakfast conversation was amazing.   The other guests included a Scottish couple (leaving next morning for Moraine Lake near Banff, where we stayed in 2004), a British couple (eventually planning to go out to Tofino, before visiting a son in Melbourne), a Swiss couple, a Chinese couple, and an Iranian named Ali from Houston, Texas.  The Chinese couple didn’t talk very much, although another guest said that the man’s English was better than his Chinese!  We were there on the day of the Brexit referendum, and I remember having a long discussion on it with the British woman in the afternoon.

The weather changed overnight, from warm and sunny to a cold, steady rain.  We decided to spend the day indoors.  We spent a couple of hours at Roedde House, which was in the next block.   Here’s a link to the photo gallery for Roedde House. 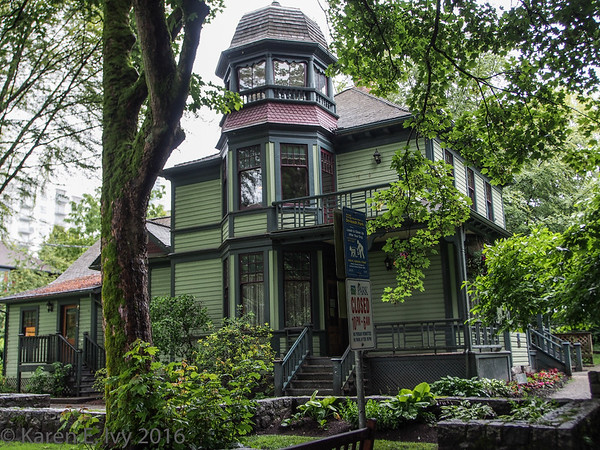 The house was built in 1893 by Vancouver’s first bookbinder.  It’s been restored to show late Victorian family life.  The parlor is classic:

The room that floored me was the kitchen, and I now wish I’d asked someone to stand in this photo, to show the dimensions.  Apparently Mrs. Roedde was a very short woman, around 4′ 11″, and she insisted that all the kitchen work spaces be built at a convenient working height for her.  So here’s the kitchen sink, built for a woman just under 5 feet tall:

Since her husband was quite well-to-do, I wonder if she ever hired a maid – and if she did, did she hire a short maid??

Now, Mrs. Roedde had a sewing area, which I didn’t photograph because it was a very small room at the top of the tower and I couldn’t get a good angle.  But it wasn’t Mrs. Roedde who had a Singer treadle sewing machine.  It was Mr. Roedde – here it is in his office:

He used it to sew paper together so it could be bound into books.

After we finished at Roedde House, we went on out to another usual destination in Vancouver:  The Museum of Anthropology at the University of British Columbia.  If you’re interested in British Columbia’s First Nations, this is where you come.  Click here to see the full gallery, I’ll just share some selected photos.

This, of course, is the classic carving in the museum, The Raven and the First Men.  I go by to look at it every time we visit.

They have a lot of traditional carvings, and also some modern versions.  This is traditional. 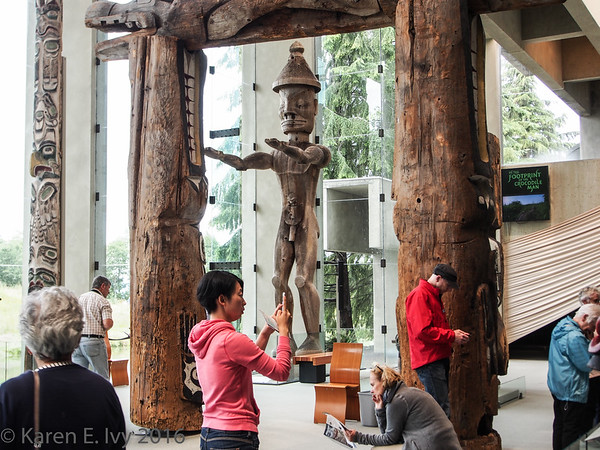 This is modern, and was outside in the museum grounds.

Also in the grounds are a lot of carved posts, and a restored First Nations village.

The grounds are very soothing to wander through. 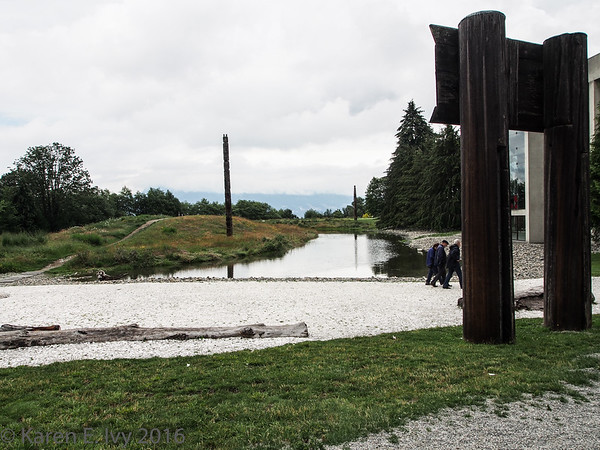 The next day, we boarded a plane to come home, and that was the end of vacation 2016.

This entry was posted in Vacations and tagged 2016 Vacation. Bookmark the permalink.