Our next stop after Juneau was Skagway, buried deeply in an inlet in Alaska’s Inside Passage.  To get an idea of how deeply it’s buried, take a look at this Google Maps link; the map should be big enough to show the inlet:   Google Map of Skagway

Skagway has its own history, of course; you can find a general overview on Wikipedia.  But it’s primarily remembered as the jumping-off place for the 1896 Klondike Gold Rush, in the Canadian Yukon.  Billy Moore, an early resident of Skagway, homesteaded at the mouth of the Skagway River in 1887 because he believed there were goldfields in the Klondike, and also that Skagway was the most direct route to the goldfields.

So obviously, the major cruise ship activity on arriving in Skagway is the bus trip up the Klondike Highway to the top of the White Pass, which was the route taken by the prospectors who came by way of Skagway.  The trip was fascinating when you considered that the original prospectors would have taken it on foot or horseback.  It is not gentle country.   The rock formations below are typical.

Taken from the Klondike Highway

All the photos from the Klondike Highway trip are in my gallery, Klondike Highway; I’ll share a few of them here.  If some of them look fuzzy, they may have been taken through the window of a moving bus; we didn’t stop very often.  One of the things we saw from the highway was the White Pass and Yukon Route narrow gauge railway, mainly because a train was passing as we went by. 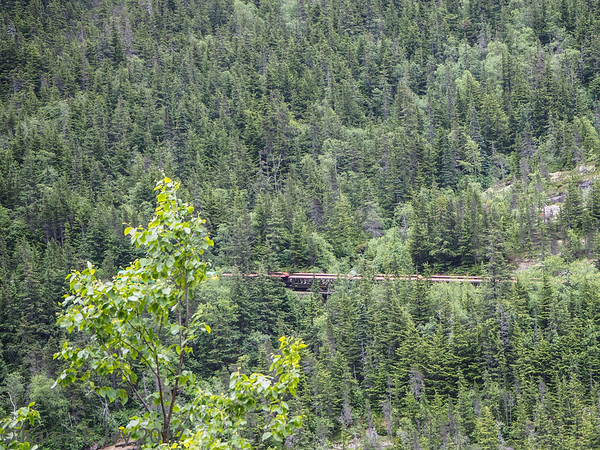 It’s pretty wet country, it has a lot of waterfalls.  Trust me that the cascades in the next photo are all one watercourse, the Pitchfork Falls.

The Klondike Highway feature that really startled me, though was the Captain William Moore suspension bridge.

This bridge allows auto traffic to cross Moore Creek Gorge, which is a fault line.  And if you’re thinking it’s a suspension bridge with a single anchor point – you’re right.  Wikipedia says this is to keep earthquakes and fault movements from tearing the bridge apart.  It was built in 1976 and in a mere 40 years has deteriorated to the point that the Alaskan authorities began to consider replacing it in 2015.  Among other things, the traffic on this highway includes laden ore trucks.

Since Moore Creek Gorge is a fault line, and our guide told us there are 2 other fault lines quite near the creek, I’m a little concerned about the replacement plan, which is to fill in the gorge with concrete, with the road on top and a culvert for the stream to flow through at the bottom.  My trip over the bridge was in 2017, when it was still there; a later article says the completion has been delayed to 2019.  I still think they may eventually regret that concrete filler.  Here’s one of the other earthquake faults near the bridge:

We passed Bridal Veil Falls (the Klondike version) more than once.  Here’s the long view:

And here’s the short view (through the bus window, sorry): 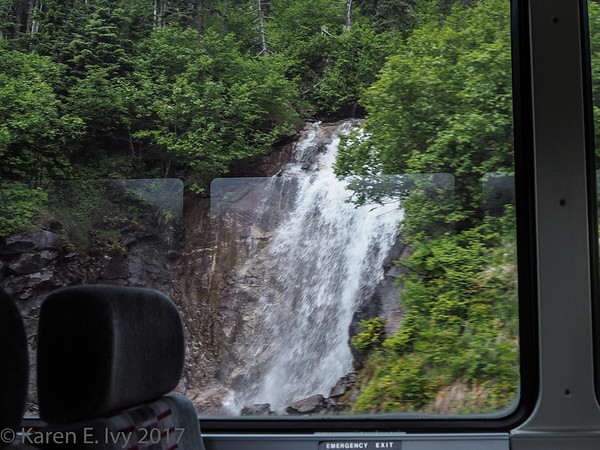 By the way, Bridal Veil Falls is the third earthquake fault.

Here’s a hint about the winter weather conditions: 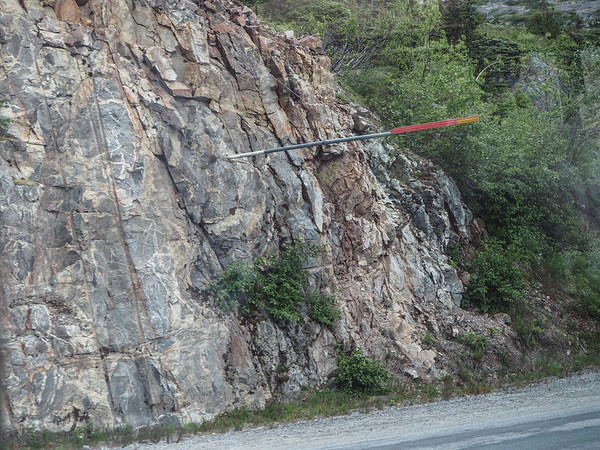 At the top of the White Pass, the road takes you out onto a plateau; no more massive rock walls, you’re on top of them now, looking out over country for which “tundra” seems complimentary.  Here are 2 examples, there are more in the gallery. 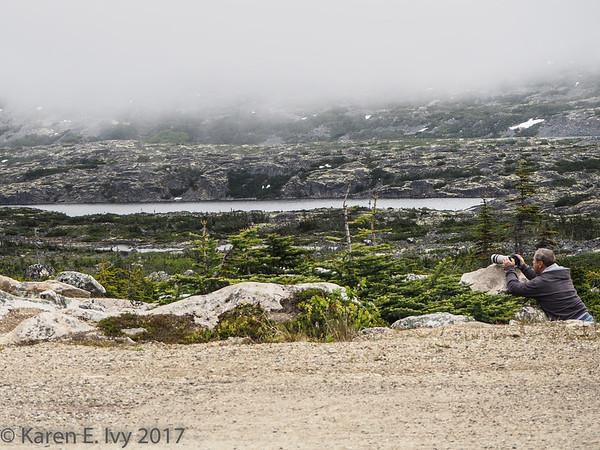 On top of the White Pass; that streak is a small lake

And here’s a less flat part:

On top of the White Pass

You may have noticed the grey along the top of the last couple of photos.  Although we drove through clear air while climbing, the top of the White Pass was covered with a thick and quite low layer of fog – at least the area where we were.  You can see from this that we were not far from the edge of the fog:

Top of the White Pass; that’s our bus

As we started back down, the fog occasionally came down on us, obscuring this little lake: 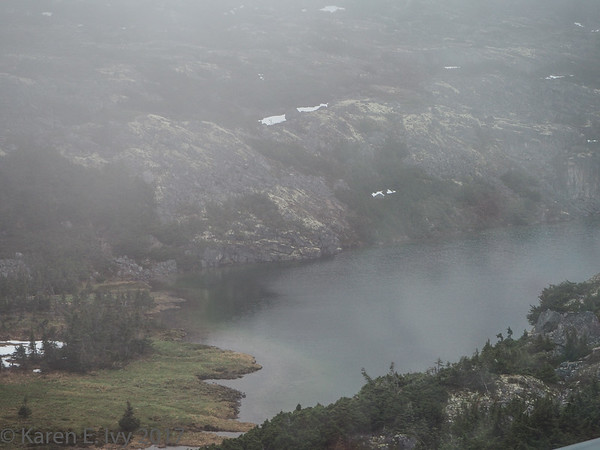 Lake in the fog, White Pass

Oh, and by the way – without passing any signs that I noticed, we are in Canada in the last few photos.  As we came back down highway, we were welcomed to Alaska, both by an official sign and some ravens:

Returning from the Canadian Yukon 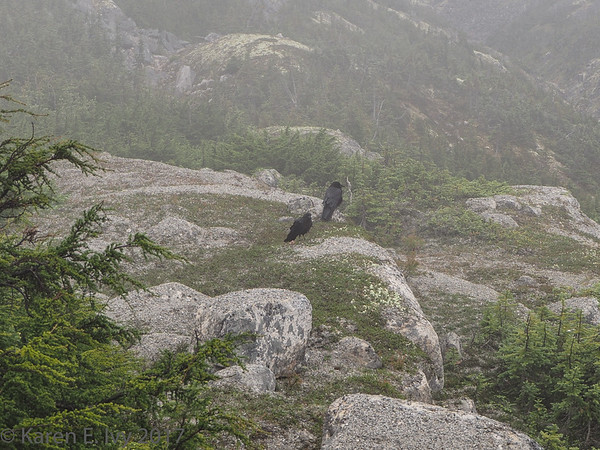 Ravens in the fog, White Pass

The U.S. has a port of entry there; Canada doesn’t.

The Port of Entry isn’t really very near Skagway

Based on the time stamps on my photos it took us over 15 minutes to get down to town.  I’ll cover Skagway in another post.

This entry was posted in Personal, Vacations and tagged Klondike Highway, Skagway, Wade in the Water 2017. Bookmark the permalink.