Before I talk about Skagway, I want to share an incident from the cruise ship which made my day, and almost made me miss the Klondike Highway tour (which left at 8:30 AM, gah).  My “official” dining room (I think it was Botticelli) was way at the back of the boat, but Da Vinci dining room was much closer to my cabin, and I could eat breakfast there if I didn’t mind sharing a table with other lost souls.  At the table that morning was Ed (not his name), 89 years old, a Korean War vet.  He was recently widowed and was on the cruise looking for a “nurse with a purse!”  He was so funny I couldn’t leave the table as early as I should have.  Still, I made the tour.

We got back to the Skagway area around 11:20, and the tour stopped to look at the reconstruction (preservation?) of Liarsville.  If you read the Wikipedia article I linked, you’ll find that Skagway was a major entry port for the Klondike Gold Rush.  The first steamer full of prospectors docked in Skagway at the end of July 1897.  Wikipedia doesn’t give the pre-gold rush population of the town (they may never have bothered to count), but Wikipedia says,

The population was estimated at 8,000 residents during the spring of 1898 with approximately 1,000 prospective miners passing through town each week.

Prospectors didn’t, as a rule, stay in Skagway.  It was the gateway to the White Pass, which I traversed comfortably in a bus on the Klondike Highway; and beyond the White Pass lay the goldfields, in ground that may have belonged to the United States, and maybe to Canada; the borders had been in dispute since Russia sold Alaska to the U.S. in 1867.  It’s paved and driveable today, but I doubt anybody went up that pass who didn’t expect to get Really, Really Rich at the goldfields.

So Liarsville was a camp outside Skagway which was occupied by journalists, who came up to cover the Klondike gold rush, without actually wanting to climb the pass to get there.  They interviewed arriving and returning miners and sent home a number of stories, some of which may even have been true.  This is a sample of the current buildings in Liarsville, known today largely as a cruise destination with a salmon bake and variety show, plus places where someone will teach you to pan for gold. 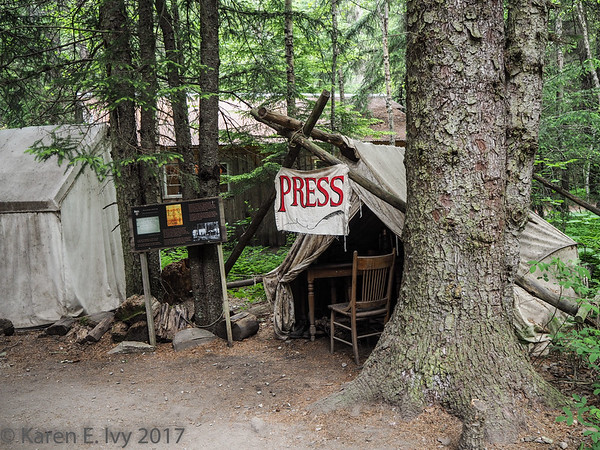 Building in Liarsville, near Skagway

We wandered around the area and attended the variety show, which we found silly.  We didn’t have enough time there to do anything but shoot a few photos.  Of course there was a saloon.  We missed the salmon bake.

After Liarsville, on to Skagway, which is a long, narrow town in a long, narrow valley with very high, steep sides.  All my photos of Skagway (and Liarsville) are in my Skagway photo gallery, feel free to browse.  I found a note in my travel diary that says I found the area through the White Pass “gorgeous, forbidding, rocky, and green – it reminded me more of Wales than anywhere else I’ve seen.”  The same applies to Skagway.  Here’s a look at it from above.

Skagway from the Klondike Highway

In my post on the Klondike Highway, I included a Google Map link to show readers just how far back Skagway is from the Pacific Ocean.  Here’s what the inlet looks like from the stern of the cruise ship, docked in port:

Skagway inlet from the cruise ship

The mountain at the end isn’t anything like all the way out.

In Skagway there wasn’t much to do except have lunch with a couple of other cruise passengers and do a little shopping.  The restaurant/bar was distinguished by the art – a salmon created from driftwood, on the wall: 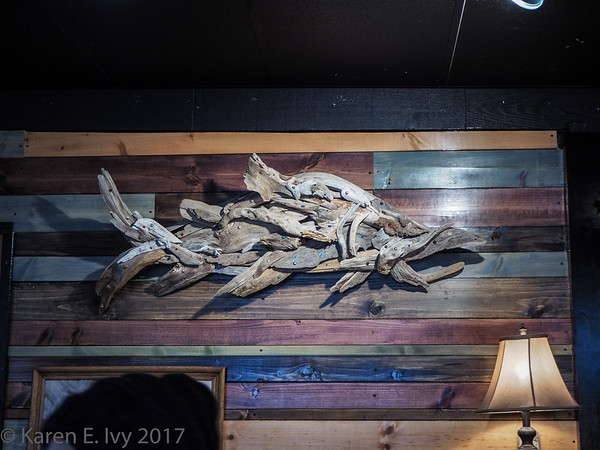 I spent a surprisingly small amount of money on a couple of handmade pieces of jewelry, an intricately carved pendant made from mammoth ivory and a smaller one made from a small piece of polished walrus tooth.  I remember Skagway as a 3 street town – one major street down the middle of town (and of the valley), and maybe one flanking parallel street on either side.  Here’s a look at it from the ship, which suggests 3 streets is too narrow down by the port: 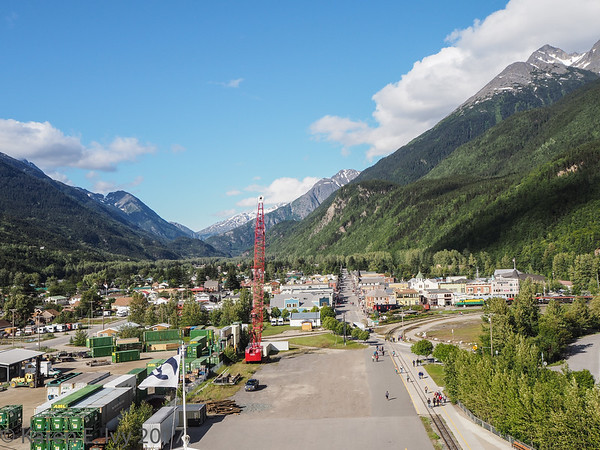 Skagway, from the cruise ship

But look at this shot from the Klondike Highway and you may see what I mean.  The town vanishes into the trees very fast.

Upper Skagway, from the Klondike Highway

Parts of the downtown look pretty nice, here’s a shot down the main street (of course, called Broadway). 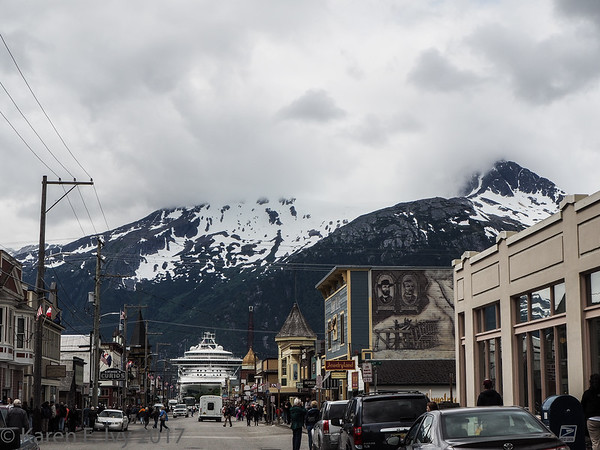 Downtown Skagway with the Grand Princess in port

But I also took a shot down a side street, which doesn’t look much changed since 1898 except for the utility poles.

Side street in Skagway

This entry was posted in Vacations and tagged Princess Cruises, Skagway, Wade in the Water 2017. Bookmark the permalink.