Before I go on, I’d like to share some observations on large cruise ships, which I take from my travel diary:

I find cruising odd.  There are no public trash cans.  The staff takes care of everything.  When you finish eating, you walk away from the dirty dishes; the staff will pick them up.  I discovered that some people make cruising their hobby; it appears to be the only way this group takes vacations.    It’s all kinds of people – fat, thin, young, old, disabled, active, with and without kids.  They’re mostly very chatty and friendly.  Cruises have activities every waking hour.  In addition to the obvious – movies and music – there are towel animal folding competitions (I’m not making this up), game shows, lectures, and auctions.  Many bars have live entertainment.  The ship had 2 jewelry stores but no “convenience” store:  I couldn’t buy a pencil, or a candy bar, or a bottle of water.  Or, per my roommate, a hearing aid battery.  Except for in your room, or outside, there is no silence; and it’s kept air-conditioned a little too cool for my taste.  Now, on to Victoria.

Our last stop on the Wade in the Water cruise was Victoria, B.C.  I like Victoria; my husband and I have visited it several times, the last in 2016, making our own reservations.  There are some very nice bed and breakfasts there.  Our option on this trip, of course, was one of several bus tours – only one, because the ship was scheduled to leave at 1:30PM! Cruise tours do not leave much time for contemplation.  There was a bus tour option to the fabulous Butchart Gardens, which is a solid half hour north of Victoria; I doubt they had time to view the whole thing.  Last time my husband and I toured it, we took most of a day.

All my photos from this stop are in my gallery Victoria, which I encourage you to check out; I took many more photos than I’m sharing here.

I’m interested in old houses, so I took the tour to Craigdarroch Castle, with a stop at Mt. Tolmie.  Victoria was at 89 degrees when we debarked for the tours – I’ve never seen it that hot!  (And as the day went on, clear and hot morphed into overcast and muggy.)    We drove through downtown, of course; the most interesting thing we passed was the Chinese Children’s School (taken from a moving bus, sorry): 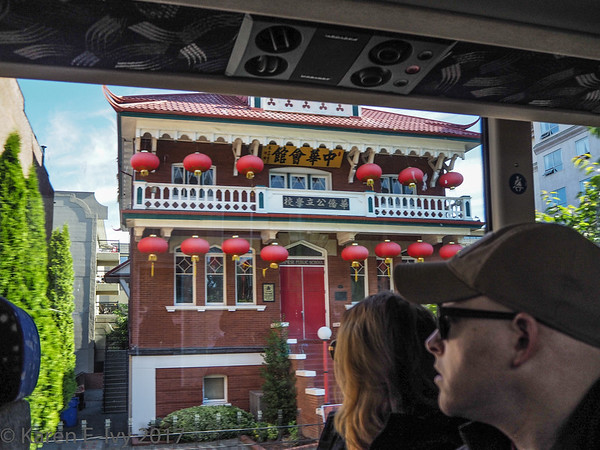 Our first view of Craigdarroch Castle included a surrounding of yellow plastic fencing, there was some construction going on at the rear, so I took a closeup of the tower:

Here’s the view from the front, which I didn’t see until I’d gone through the whole place and come out. 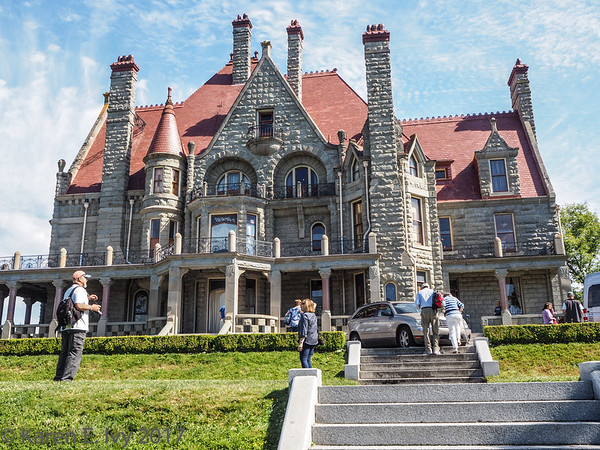 The castle site (linked above) has some nice photos in a video format, including 2 Victorian ladies playing pool.  What you want to see in this place is the woodwork – my God, the woodwork.  Yes, that’s 3 stories of staircase.

For contrast, here’s the servant’s staircase, at the back of the house – a lot narrower but still some beautiful wood. 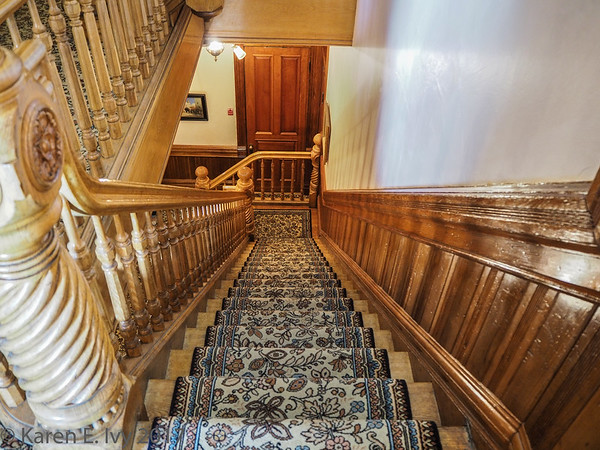 There was also the Victorian ornamentation, as in this clock: 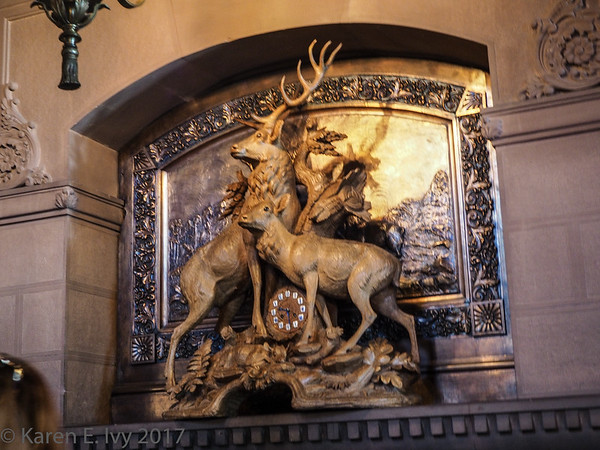 The rooms that caught my attention were the servant’s room (top floor, of course), and the smoking room – I think the Victorians were the last group who felt you needed a whole separate room to worship your tobacco. Notice the elaborate decoration on the steam heaters in the servant’s room, and the treadle sewing machine. 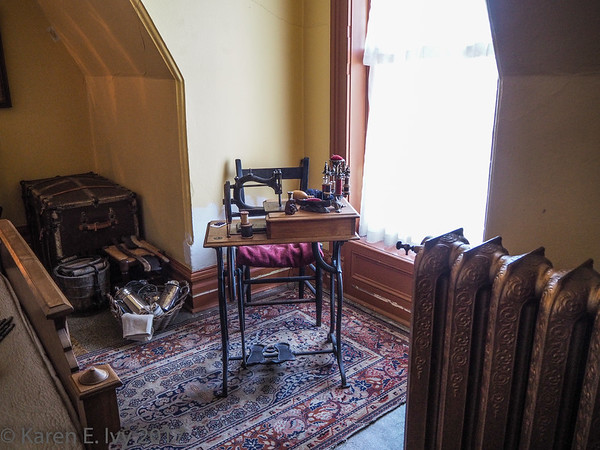 This was where the Master went with his friends to indulge in their pipes, presumably dressed in elegant smoking jackets: 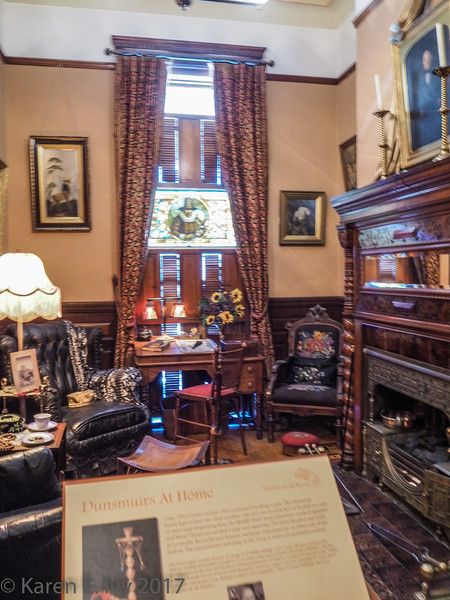 And, of course, the elegant Victorian bathroom, all done in matching paneling, including the overhead tank: 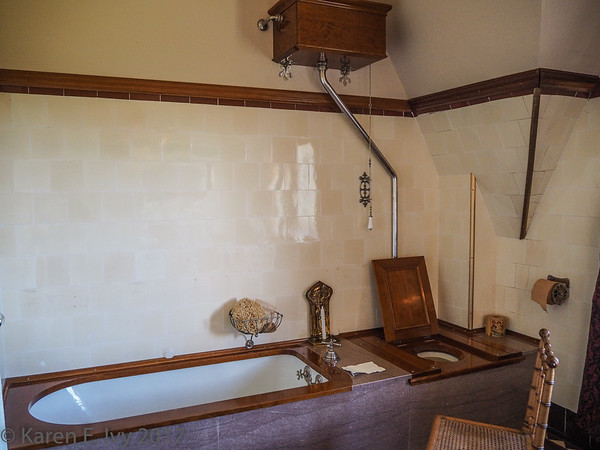 After Craigdarroch Castle, we boarded the bus again for the stop at Mount Tolmie Park, which is basically an elevated viewpoint.  It’s surprisingly close to downtown Victoria and the main harbor.  We drove past Victoria Harbor on the way, with a stunning view of the Strait of Juan de Fuca: 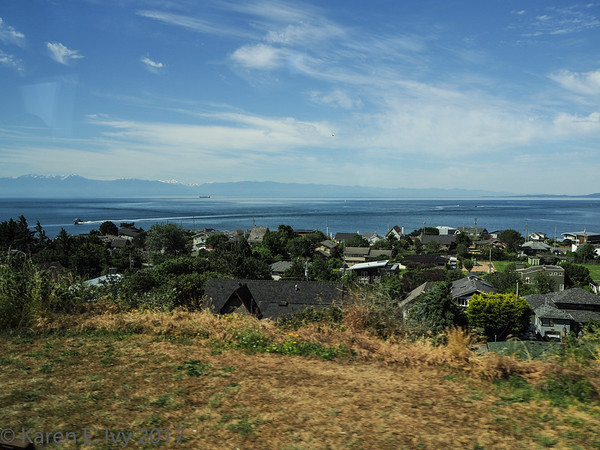 Strait of Juan de Fuca, from the bus

The gallery has a number of good views of the harbor, but this one is the star: 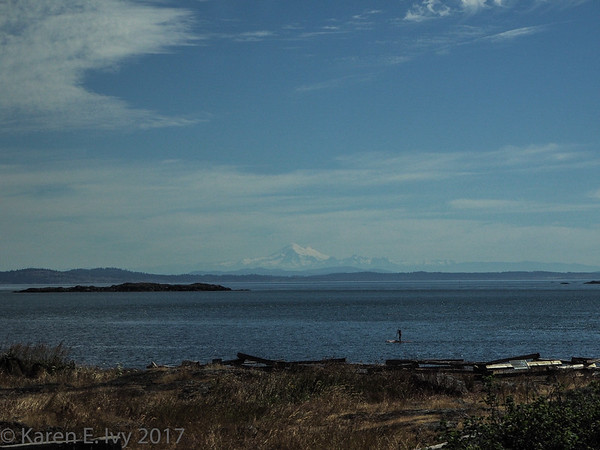 Mt. Baker, a dormant volcano, from the bus

I don’t think I knew there was a dormant volcano close enough to Victoria to photograph.

Mount Tolmie Park, as I said, is a high point for viewing Victoria.  Here’s one sample view of downtown (more views in the gallery): 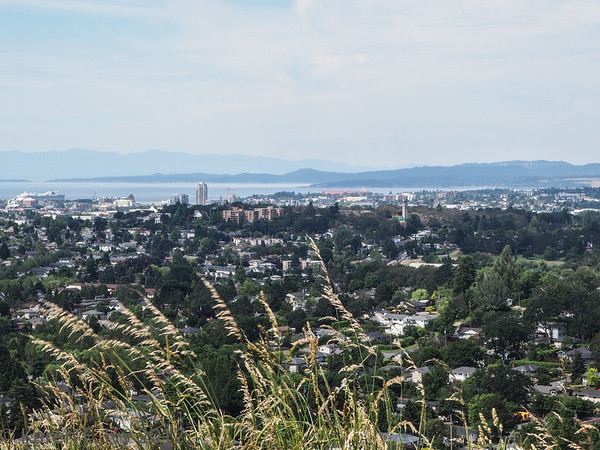 After Mt. Tolmie Park, it was back to the harbor to reboard the Grand Princess for the final leg home.  Before I boarded, I took this photo of a Scottish bagpiper (dressed Scottish, anyway, I didn’t ask him for his pedigree) standing near a totem pole. 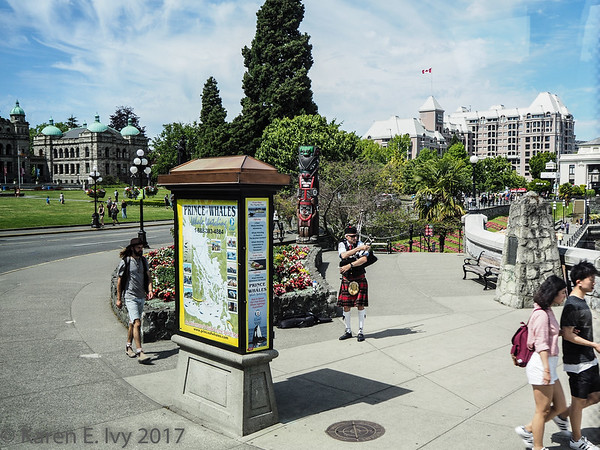 I liked the contrast of cultures.  I didn’t check to see what tribe was responsible for the totem, sorry; you’ll have to go yourself and look!

This entry was posted in Vacations and tagged Victoria, Wade in the Water 2017. Bookmark the permalink.