In the fall of 2018, we signed up for the Celtic Lands cruise, in early June 2019, , especially as it included a 2 day side trip through the D-Day beaches, the day after the 75th anniversary.  We both looked at the brochure and said, “I wanna DO that!”  So we reserved our spots and spent the next 6 months paying for it in installments, and dealing with Life.

We left for London on June 3.  We considered the 10-11 hour flights between San Francisco and Europe (Heathrow going, Amsterdam returning), and decided to fly business class, the first time either of us has done so.  It’s appallingly expensive but boy, does it help.  For one thing, we waited for our outbound plane in the Delta Lounge, in comfortable chairs, waited on by attendants with free food and drink!  For another, when they feed you in business class, you get a table cloth and cloth napkins, and real plates and silverware!  (And real food.)

It’s easier to sleep in business class, but it’s not easy.  Your individual seat (with leg room and a footrest) expands into a long, very narrow bed, which they make up with a sleeping pad, a good pillow, and a very nice warm duvet.  But you’re still on a plane.   The converted seats are very hard, and just barely wider than the passenger.  (At least, just wider than me.)  And the odds are good you’ll sleep in your clothes.  It’s still better than a seat in economy, but I just can’t sleep well on planes, even if I can stretch out.

Flying to London was a red-eye, for fairly obvious reasons.  We left SFO on June 3 at 6:00 PM Pacific Daylight time, and arrived in London at 12:15 PM British Summer Time.  (Or, 4:15 AM Pacific Daylight time, 10 hours later.  The joys of modern travel.)  We had no trouble meeting the tour people at the airport and getting into London to the hotel – the Intercontinental Park Lane in Mayfair.  It was raining.

So what do you do in Mayfair, on a rainy mid-afternoon when you’re short on sleep?  You go for a walk, if you’re not very far from Buckingham Palace, so that’s what we did.  The few photos I took that afternoon are in my gallery London.   On the way, we passed the memorial for the RAF Bomber Command, in Green Park.

A surprising number of people were walking around Buckingham Palace in the rain.  High points were the Victoria Memorial, in front of the palace, and the Canada Gate into Green Park.

There are photos of details of the memorial in the gallery.  Here’s the Canada Gate – the guy in front of it is my husband Jim:

And here’s the line of tents protecting the protestors, who objected to the official visit by Donald Trump the previous day.  Thank God we were a day behind him the whole trip.

The most surprising thing about the people walking around in the rain that day was the ten pound note one of them dropped on the sidewalk – which I found and kept!  Yup, £10 – somebody dropped a ten-spot.  I forget what I spent it on.

Our second day in London, the cruise people took pity on our jet lag, and took us on a bus tour of London, with one stop:  at the Underground War Rooms used by Winston Churchill during World War II, which is a branch of the Imperial War Museum.  We spent quite a time there, as there’s an attached museum about the life of Churchill.

Here are the Cabinet War Rooms, from which Churchill directed the war after becoming Prime Minister.  He also slept in the underground complex.

I have very few photos because the light was unforgiving.  I did get a shot, with my camera, of a sign explaining what the various emergency warnings were:

The rest of the day we spent driving around London in a bus, which is not conducive to good photography!  I got one good shot of Winchester Cathedral spires, which is in the gallery, but I want to share this one of the National Gallery, taken from across a square while the bus was slowed down. 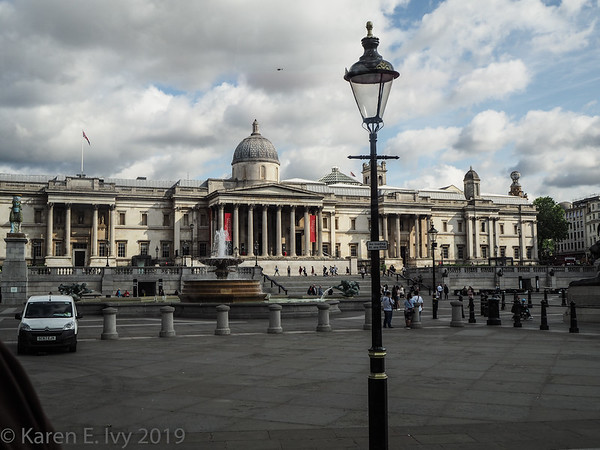 The next day, we continued our historical research into the D-Day invasion, but that’s another post.

This entry was posted in Vacations and tagged Celtic Lands Cruise 2019, London. Bookmark the permalink.