On June 6 we checked out of the London hotel (had to have the bags ready for pickup by some unholy hour) and after a very early breakfast, headed for Portsmouth and the D-Day Museum – and Le Boréal.  The drive through the English countryside was gorgeous.  The gallery for this day is Portsmouth, but I’ll share some photos here.  Our first goal was Southwick House, somewhat north of Portsmouth, the advance command post of the Supreme Headquarters Allied Expeditionary Force (SHAEF).  In other words, Eisenhower’s HQ for D-Day and beyond.

We heard an absolutely fascinating lecture on the process of planning D-Day, and how Ike made the actual go-ahead decision for June 6.  He based it on the weather predictions of a 28 year old Scot named John Stagg, who had a reputation for accuracy, and more sources of weather information than the Germans had.  The lecture was in the map room:

We then adjourned to the room across the hall, where the D-Day decision was actually made.  I love history and I really enjoyed this.  I spent the trip, and some time after, reading Stephen Ambrose’s book D-Day, which I recommend heartily.

After the lecture we briefly toured the Royal Military Police Museum, which is also on the Southwick House grounds.  Then it was back on the bus (we spent a lot of time on buses on this trip) and off to Portsmouth, where we had a huge lunch at the Guildhall and another lecture on D-Day from Prof. Andrew Roberts.  On the way to the Guildhall we passed this pub.  If you don’t know who Isambard Kingdom Brunel was, here’s a link.  I love the fact that someone in Portsmouth named a pub after him.  This has nothing to do with D-Day. 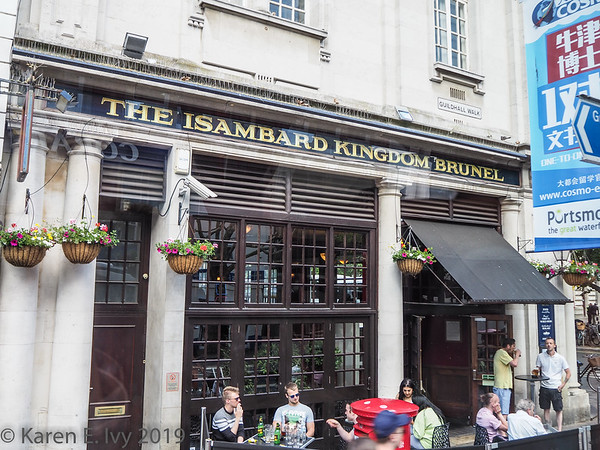 After lunch we had some time to explore the Portsmouth Harbor before we went to the D-Day Museum.  Portsmouth Harbor is gorgeous and we had a beautiful day for it.  We saw the remains of Southsea Castle, originally built by Henry VIII to defend against invasion from France (and from the Holy Roman Empire).  Southsea Castle seems to have been huge; there were numerous pieces of the ruins.  There are several other photos of pieces of it in the gallery.

Portsmouth is a very busy harbor and, ironically given what it launched on D-Day, one of its functions is a ferry terminal for ferries to the French coast.

I was amused when, on the way to the museum, we passed a Winston Churchill impersonator.  We didn’t talk to him, but I had to take a picture. 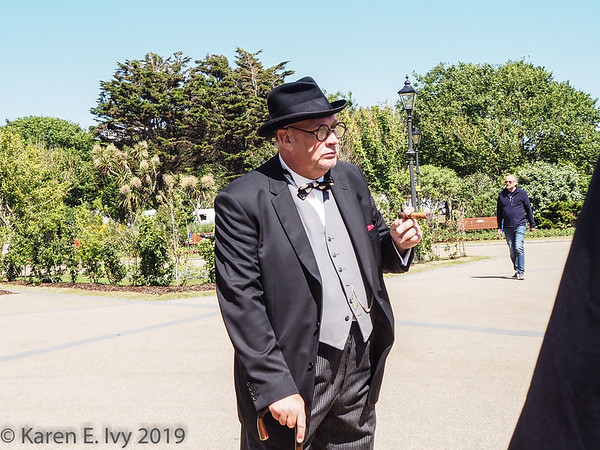 Frankly, at the D-Day Museum I only saw one thing, but it was amazing.  (Also, as usual, we didn’t have all day to explore.)   It’s called the Overlord Embroidery.  It consists of 34 hand-stitched panels with a total length of 83 meters, a little over 272 feet long.  The basic technique is appliqué, with additional hand stitching as needed.  It was commissioned in 1968 and took several years to design and five years to embroider.  More detail is at the linked site.  I didn’t photograph all the panels, but the Portsmouth gallery has 9 photographs of different panels.  I’ll close this post with three; I encourage you to go look at all 9.  I didn’t have anything to write down what they represent, but I think this one is London in the Blitz.

The next one clearly represents the fleet of vessels and planes that supported the invasion.

Finally, I really liked this one because of the expression on the piper’s face.

After the D-Day Museum, we boarded Le Boréal.  We got there about 6 PM and had one hour to unpack and figure out where to put things.  Then we all had to turn up in the Theatre (deck 3) for a lifeboat drill, including how do we put on those lifejackets on the top shelf of the closet.  Given that there were something like 240 of us to instruct, all this took a very long time.  I remember being glad the boat wasn’t actually sinking, because we’d all have drowned if it were!

Afterward was the Captain’s Welcome Dinner, in the restaurant on deck 2, which is table service.  By now it was 7:45 PM.  Since I’m not supposed to eat very late, and I’d had a huge lunch, I skipped the soup and the appetizer and only ordered an entree.  Because of their service rules, I didn’t get it until after 9 PM, when the server was delivering the last of the ordered appetizers.  I got it then because I told him I wanted my entree NOW.  For the rest of the trip, my husband and I ate in the buffet restaurant on deck 6, where we could see and choose what we wanted to eat.  The food was actually very good, but next time I must remember to tell them I need low salt.

And the next day, Omaha Beach.  To be continued.

This entry was posted in Vacations and tagged Celtic Lands Cruise 2019, D-Day, Portsmouth. Bookmark the permalink.