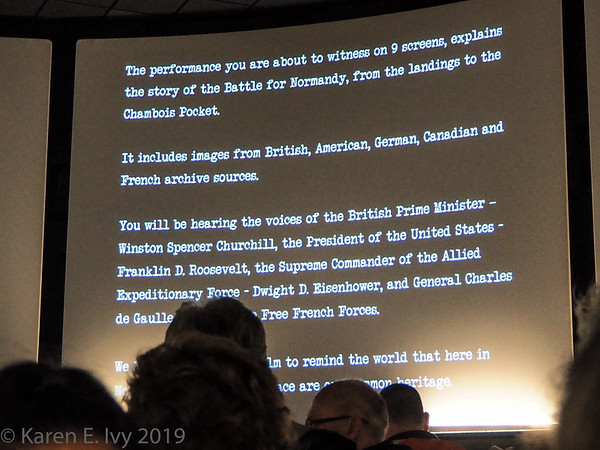 Nobody landed at Arromanches-Les-Bains; the Allies wanted to leave the harbor clear for a portable Mulberry harbor which was towed over from England, and served for 5 months.  The Mulberry portable harbors are very interesting and it’s worth checking out the Wikipedia article on them, which has aerial photos of some in action.

There are several D-Day memorials there, of which I found this (and several similar statues) the most moving: 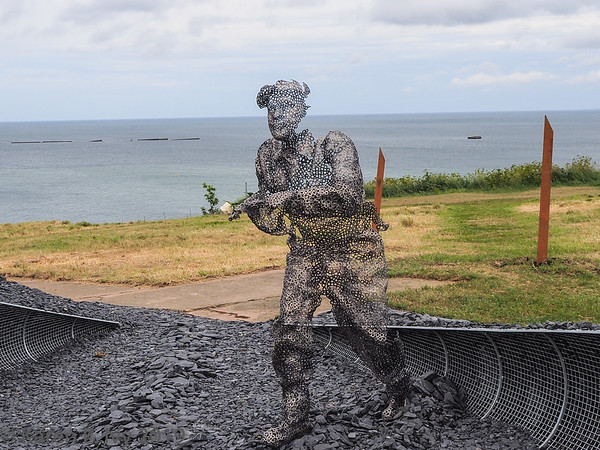 In addition, there were several pieces of equipment used during the invasion, and a number of people, in and out of uniform, some of whom looked like re-enactors.  I don’t know if these vehicles were brought by them or were on display:

After Arromanches, we traveled on to Omaha Beach, to visit the American cemetery there.  It’s in Colleville-sur-Mer, a commune.  A commune in France is similar to a township or an incorporated municipality in the U.S.; it has nothing to do with communism!  I don’t recall anything resembling a town near the cemetery.

For a stupid reason, I missed the lecture by David Eisenhower at the cemetery.  I had to use the bathroom as we set out, and told the guide that, and went, but she didn’t wait for me, and I never caught up with them.  The place is huge.  Only my husband noticed that I was gone.  So I wandered around by myself and took a couple of photos, which you can see in the gallery.  I also got my first actual photo of Omaha Beach, from a vantage point: 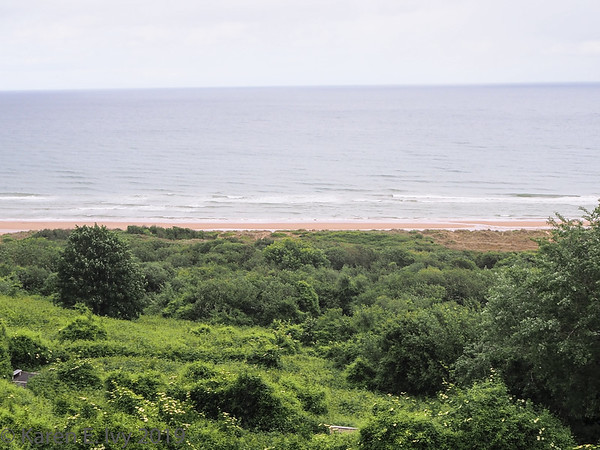 Omaha Beach, from the American Cemetery 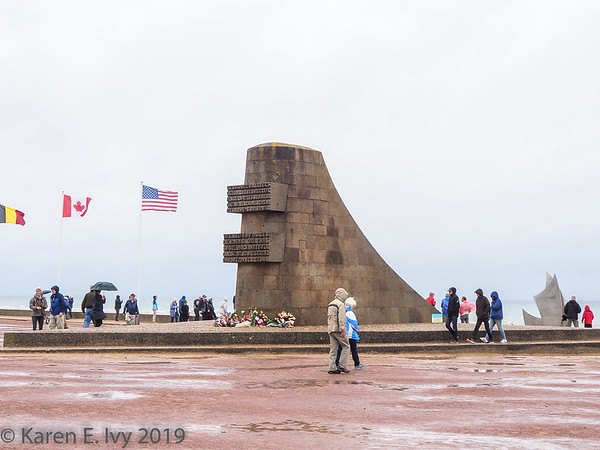 The almost unreadable raised plaques on it basically say, in French and English, “The Allied forces landing on this shore which they call Omaha Beach liberate Europe June 6th, 1944.”  I have a close-up photo of it in the gallery if you want to read it yourself.  There’s also an inscription on the side memorializing the 1st U.S. Infantry Division.  The odd looking silver things in the lower right of the photo are part of Les Braves. Here’s the whole thing: 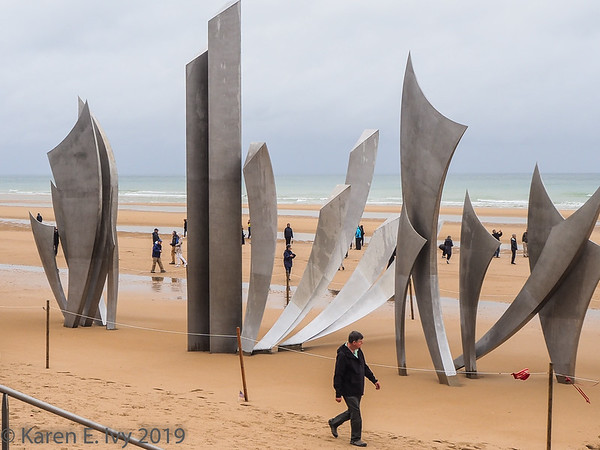 And here are some buildings associated with Saint-Laurent-Sur-Mer, another commune.   The buildings here are just part of it; if you look it up on Google maps it takes up a lot of space, which I recall as mostly empty.

And this one took me some time to identify; it’s down the road a little farther in Vierville-Sur-Mer, and it’s the remains of a pier which was to support the Mulberry A temporary harbor at Omaha Beach, which was destroyed in “the worst storm to hit Normandy in 40 years”, 3 days after it went operational.  Mr. David Johnson, along with his photo of the pier, wrote a very interesting account of this on his Flickr account, which I recommend you read.

Remains of Mulberry A pier, Vierville-Sur-Mer

If you get the idea that Omaha Beach took up a considerable swath of the French countryside, you’d be right.