This will be a longer post than I thought.  I spaced out on the fact that, after touring Pointe du Hoc and Utah Beach (and eating our bag lunches on the bus because it was raining), we went on to tour some of the French villages that were liberated by paratroopers in the early hours of D-Day.  So stay with me, folks.

The photo galleries for this are Pointe du Hoc and Utah Beach (the last 2 pages), and a second gallery, Elsewhere in Normandy. This gallery has many more shots of the local churches than I could include in this post.

Utah Beach is full of official monuments – a Federal monument honoring all the U.S troops who participated, a monument honoring the 90th Infantry.  They’re in the gallery, but I want to share this one.  The Higgins boat is how most of the infantry came ashore.  Look at one and think about it.

They also had a museum on Utah Beach, a little back from the beach front.  There was a museum at Omaha Beach too, but we didn’t get into it, probably due to the ceremonial visit to the cemetery.  The Utah Beach museum had one that just charmed me:

Replica B-29 bomber, the “Dinah Might” – Utah Beach Museum

Isn’t that name a classic?  I can’t think of anything more “World War II American.”

There’s also a Higgins boat, with the disembarking flap not open.

Utah Beach today, like Omaha Beach, is totally peaceful and calm (allowing for the blustery weather when we were there):

It has one more memorial, right down near the beach, that I thought was really impressive – the U.S. Navy memorial.

And of course, the flags of all the countries that participated.  These were at Omaha Beach too but I didn’t get the photo there.

The two in back (facing the museum) are, of course, the U.S., and France.  In the front row the first flag is the Netherlands, second flag is Norway, third flag is Luxembourg, fourth of course is the United Kingdom, fifth flag is Denmark, sixth is Canada, and I think the seventh is Belgium.

After we left Utah Beach, the buses took us farther into Normandy, where we drove through Sainte-Marie-du-Mont, one of the first villages liberated by the paratroopers on D-Day.   I’m now reading Stephen Ambrose’s Band of Brothers, and the last chapter I read mentioned Sainte-Marie-du-Mont.  We didn’t stop; but here’s the church tower from which the local German commander (Col. Frederick von der Heydte) saw the landing craft coming in to Utah Beach:

“All along the beach were these small boats, hundreds of them, each disgorging thirty or forty armed men.  Behind them were the warships, blasting away with their huge guns, more warships in one fleet than anyone had ever seen before.” 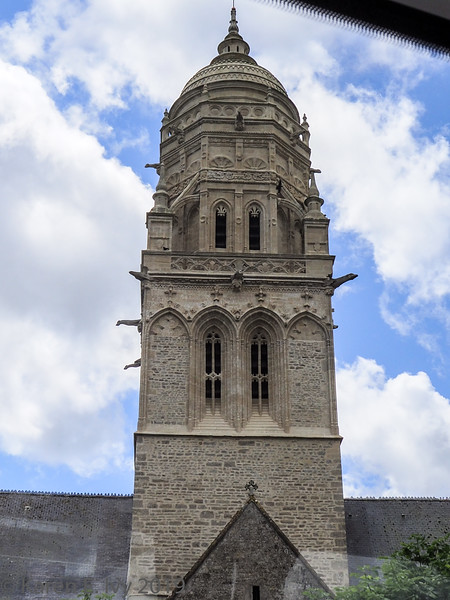 We did stop in Angoville au Plain, to see the 12th century church immortalized in this riveting account from WanderWisdom.  Here’s the church: 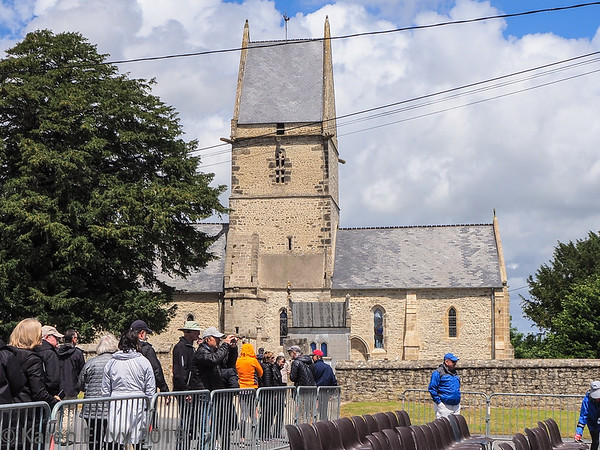 The paratrooper medics who landed here on D-Day, Kenneth J. Moore and Robert E. Wright, found themselves immediately fighting the German occupiers.  They set up an aid station in the church and proceeded to treat both Allied and German wounded.  Because they were treating both sides, the Germans left them alone.  There is a memorial to them in the village: 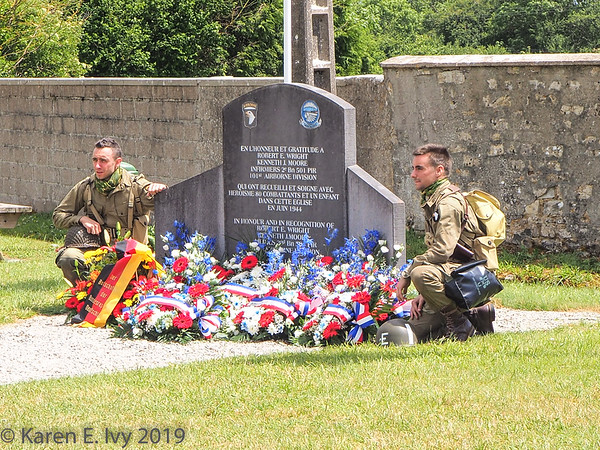 I gave my card to both the soldiers kneeling next to the monument, and told them I’d just taken their picture and to contact me if they wanted copies.  I haven’t heard from them; their choice.  They looked like real soldiers but I’m not sure; a lot of people were wearing World War II uniforms that day who looked too old to be in the service now.   But who knows?

Robert Wright was so attached to the place that he arranged to have a portion of his ashes buried there, after he died.

On the 60th anniversary of D-Day, the villagers installed a new stained glass window in the church:

After Angoville-au-Plain, which I found very moving, we drove on to Sainte-Mère-Église, which was the paratroopers’ official first target on D-Day, at least in the Cotentin.  We found a massive celebration in progress (on June 8 we were only 2 days past the 75th anniversary).  I don’t have any photos of the parade they were putting together just as we arrived – the crowd around the parade route was so thick I could only peer over people’s shoulders.  The parade included marching bands from high schools and colleges all over the United States – first one out, if I recall correctly, was from a college in Texas.  It even included the Emerald Society, the marching bagpipe band of the New York Police Department, in full and very elaborate costumes.  Sorry, I didn’t get a photo of them either.  The trials of being short!

Sainte-Mère-Église is definitely fixated on paratroopers.  Practically the first thing you notice is the statue of the paratrooper, with parachute, hanging from one of the little steeples on the corner of the church roof.  Here’s the long shot; the Elsewhere in Normandy gallery has a close-up. 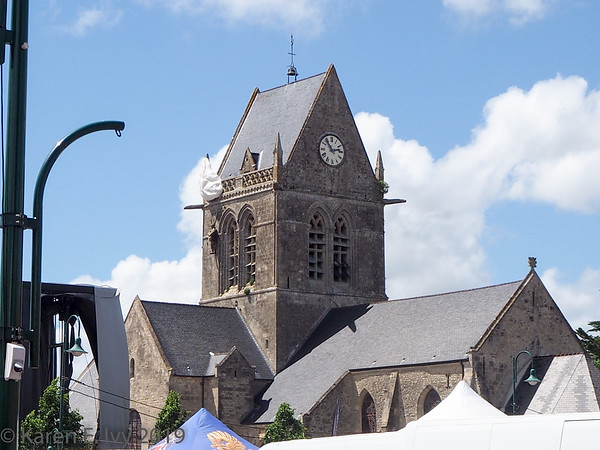 There really was a paratrooper whose chute got caught on the steeple – here’s his story, from the longer article on the town (English version!) from the French Offices de tourisme:

Private John Steele of the 82nd Division was hit by shrapnel shortly after he began his descent. He could not use his leg and landed on the church tower around 4.00 am. Beneath him, the battle was raging. John Steele spent two and a half hours hanging from the church steeple. After trying to cut free with a knife, he dropped his gun and decided to play dead to avoid becoming a target of the Germans. He was finally cut free by a soldier named Rudolf May. His wounds were treated and he was taken prisoner by the Germans. John Steele managed to escape three days later. He rejoined the Allies and was transferred to a hospital in England.

The church also has two paratrooper-themed stained glass windows, this general one, with the Virgin and Child surrounded by landing paratroopers:

And a second window, installed on the 25th anniversary, honoring the veterans of the 82nd Airborne: 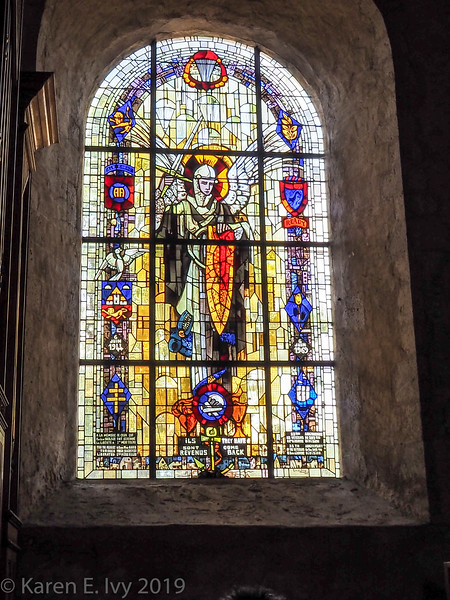 Remembering the veterans of the 82nd Airborne, Sainte-Mère-Église

Last but not least, the local coffee shop (yes, I know it looks like some kind of castle, but I bought a cup of tea there) has a paratrooper statue on the roof:

Sainte-Mère-Église also has a D-Day Museum; check out the Elsewhere in Normandy gallery for photos of a tank and more.  They also had a Douglas C-47 Skytrain called the Argonia (indoors!), posed with mannequins of airplane technicians:

Douglas C-47 Skytrain, the guy sitting on the engine is a mannequin

In another building, actually shaped like a parachute, they had a Waco CG-4 glider surrounded by mannequins representing paratroopers and officers.  Many paratroopers came in on gliders.

Waco CG-4 glider and mannequins representing paratroopers and an officer

The building really is shaped like a parachute and is just barely big enough to hold the glider:

After all the museum tours we headed for Cherbourg and the boat, and as we were eating dinner, this pulled into port and docked right next to our ship:

That’s a panorama of 4 individual photos – that ship is big, and I was much too close to it.  And I still couldn’t get the masts, although you can see from this that she’s a 3-masted sailing ship, built as a luxury cruise ship.  A fascinating end to a long but interesting day.   Next to the panorama in the gallery is a photo of Le Boréal.