The photos for this trip are all in the gallery Tresco Gardens.  I encourage you to look through the photos, I’m going to post a relatively small number of plant photos here.  My husband, a gardener, has identified all the plants he can, but you’ll see a number of plants labeled only, “Tresco Gardens.”  If you recognize any of these plants, please leave a comment on this post, identifying the photo number (P followed by 7 numerals, below the image), and tell me what it is!

We’ve now left Normandy, and France, and Central European Summer Time.  I forgot to complain about this in an earlier post but it annoyed me at the time – France is on Central European Summer Time, an hour ahead of British Summer Time.  So the night before we sailed to France, we had to set all our clocks ahead another hour (having set them ahead two days earlier to British Summer Time).  After our tour through Normandy, we’re now truly beginning the Celtic Lands cruise, with a stop I didn’t realize was Celtic.

Tresco Abbey Gardens are in the Scilly Isles (more accurately, Isles of Scilly), and yes, it really is pronounced “silly.”  Don’t ask me, I don’t live there.  To find the Scilly Isles, you start at the extreme west end of Cornwall, also known as Land’s End.  Ask Google Maps for “Cornwall” and it will show you that; and a bit to the west and a little south, you may see a tiny speck labeled “Hugh Town.”  That is the Scilly Isles; enlarge the map and you’ll see several small islands.  The Scilly Isles are part of the Duchy of Cornwall, which is part of the landed estates of the Prince of Wales.  One of the larger islands is Tresco, the site of the Tresco Abbey Gardens.  I can’t speak for the other islands, but Tresco has nothing resembling a dock that will accept a ship the size of Le Boréal; here’s a picture of the ship, against the fields on St. Mary’s Island:

So we went ashore in tenders, in several waves.  Here’s a tender full of us, heading for the landing, which is effectively a tilted concrete slab rising out of the water.  It’s used for the local ferry as well as for cruise ship tenders.

While anchoring, and waiting for the tenders, we had time to take some photos.  From our anchorage we could see two separate lighthouses, the Round Island lighthouse (on Round Island), which looks just like a lighthouse, and the Day Mark on St. Martin’s Island.  According to Wikipedia, a daymark is a navigational beacon for use during daylight.

After landing, we were divided into walking groups with a guide.  My group was lucky, our guide was the head gardener, a very nice and knowledgeable man whose name I never quite got.

Here’s a typical view in the Gardens. 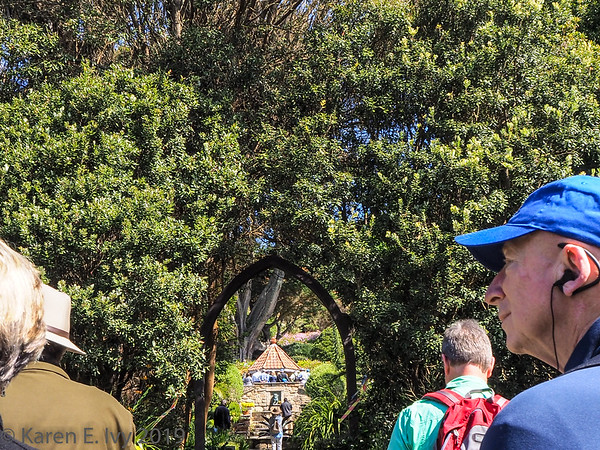 The building full of people in the middle of the archway is the Shell House, which was built by Lucy Dorrien-Smith, the second wife of the proprietor of Tresco Abbey Gardens, Robert Arthur Dorrien-Smith.  The gardens are still occupied by the family, which maintains a house in the gardens (see below).  The island of Tresco is leased to the Dorrien-Smith family by the Duchy of Cornwall.  Mrs. Dorrien-Smith is very much alive and on Facebook. 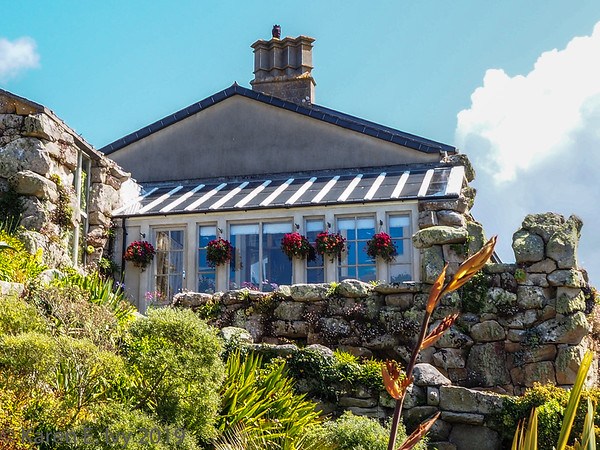 Here’s a closer look at the Shell House.  All those designs are made of shells.

Here’s a longer shot of the Shell house; the small statue you see in the wall may or may not be a portrait of Lucy Dorrien-Smith. 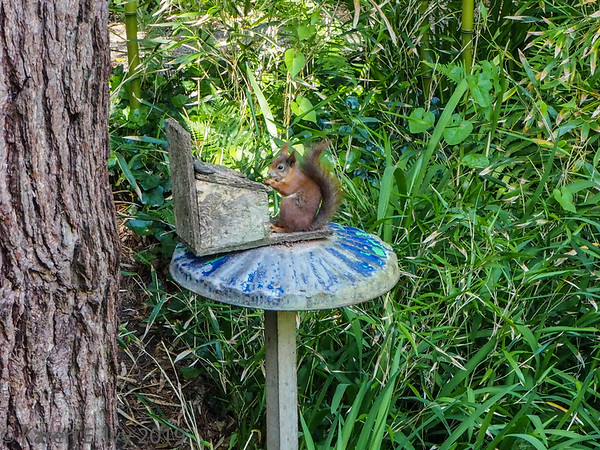 We also saw a golden pheasant (Chrysolophus pictus) – we may have seen two because the photos I got are very different.  But I had trouble with the light all day, so the difference between these two photos may just be lighting.  These are both photos of male golden pheasants; the female doesn’t have the gold cap; I’m just not sure they are the same bird. 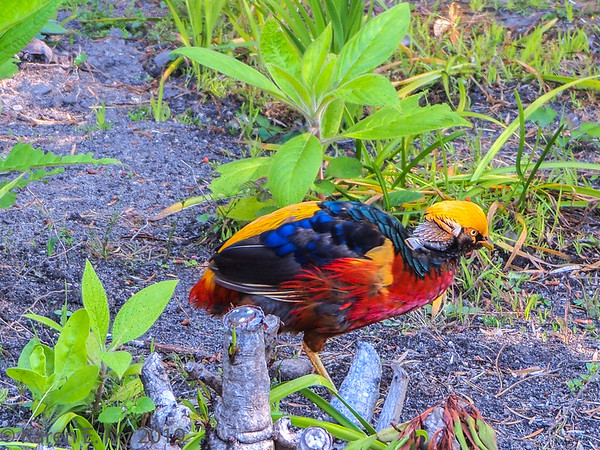 We saw a number of non-British plants, including a huge Monterey cypress (Hesperocyparis macrocarpa).  The red squirrels are particularly fond of the cones of the Monterey pine, which also grows there.

They have a Norfolk Island pine (Araucaria heterophylla), native to a tiny island between New Zealand and New Caledonia.  Remarkably, they also have a Wollemi pine (Wollemia nobilis), which is found today only in one area of the Wollemi National Park in New South Wales. Australia considers it critically endangered.

As we left the gardens and headed for the coffee shop, I discovered another display, not plants.  The Valhalla Museum displays about 30 ship’s figureheads from the age of sail, mostly from the latter half of the 19th century and mostly from merchant ships.  Here are some of the better photos I got (the light was, um, unreliable):

These two look like they’re lovers but I suspect they were just posed that way, I don’t think ships ever had more than one figurehead.

This is the only figurehead I could identify (the gentleman with the epaulets, facing us, not the figure under a gold scroll to the right), because it’s also annotated on the Valhalla Museum web site:

Here’s the caption from their web site: 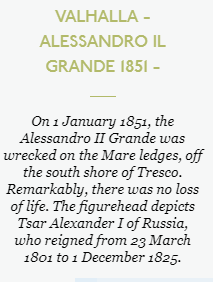 I also liked the eagle with the snake in his beak but couldn’t identify him. 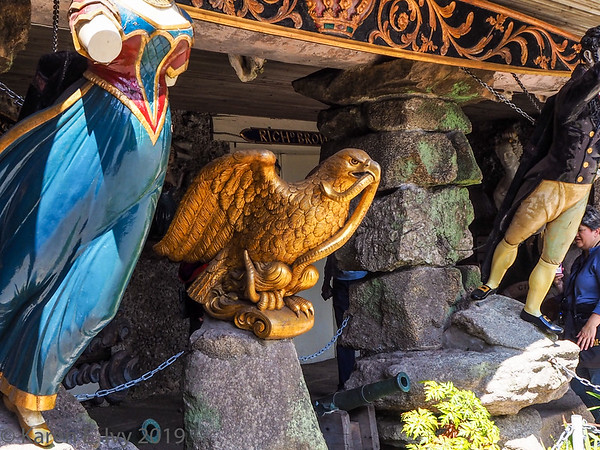 I searched for the symbolism of an eagle eating a snake and found that the image (not this exact image) is part of the Mexican coat of arms, and relates to the legend of the foundation of Mexico City.

Feel free to browse the rest of these on the next to last page of the Tresco Gardens gallery.  This is about the end of our trip to Tresco.  My last few photos include another shot of Le Boréal, and a couple of shots of St. Mary’s Island with it’s hedged fields.  This is probably the prettiest. 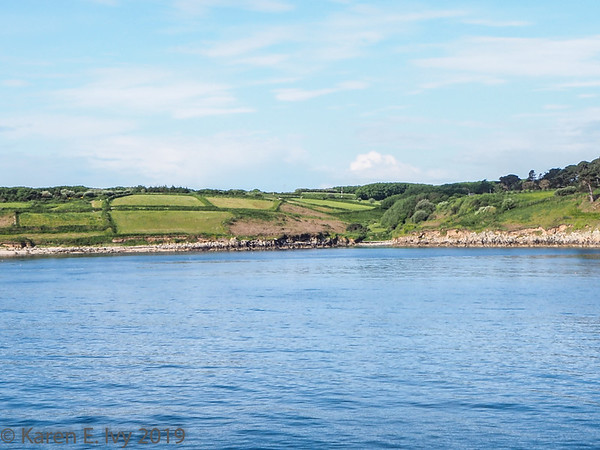