In a “Celtic lands” tour, it’s no surprise that we went to Dublin, although we only spent one day. The photo gallery for this day is Dublin, feel free to check it out for photos I didn’t include here.

The tour’s obvious target was to take us to Trinity College to show us the Old Library and the Book of Kells exhibition.  From the bus on our way to Trinity College we did see one amazing thing:  the Samuel Beckett Bridge, which is built in the shape of an Irish harp!  I took a photo of it from the bus, below, but the reflections are confusing; the photo at the link above is much better. As a medieval freak, I was very interested to see the Book itself, although I didn’t take any photos of it.  It is (obviously) kept in a glass case and open to show just 2 pages. The many gorgeous illustrations are reproduced all over the room in wall sized posters, which don’t really match the impact of a book that is 13 inches wide and 10 inches high.  It dates from the late 8th or early 9th century and was written and illustrated (like all books of the time) by hand, on calfskin vellum, using a pen cut from a goose feather, with ink made from carbon black (charcoal or lamp black mixed with a gum) and numerous colored pigments.

If you Google “Book of Kells” you’ll find a whole list of entries, some of which reproduce some of the pages and illustrations.  The site 10 Things You Should Know About the Book of Kells notes that all the illustrations are under copyright to Trinity College and are available online on its Digital Collections, in high-resolution images.  I actually found them, but I don’t know how I got to them; the Trinity College web site is, um, difficult, and a search for the Book loads very slowly.  Try this URL, and wait awhile for the pages to load:

After seeing the Book of Kells, we went through into the rest of the Old Library, which is quite spectacular, especially the Long Room.  This is what libraries used to look like.  The Long Room was built between 1712 and 1732, but it originally had a flat plaster ceiling and shelving only on the lower level.  By the mid-19th century it was being used as a national book repository and had to be expanded to look like this:

You can see the multiple galleries on each level, and this is what they look like: 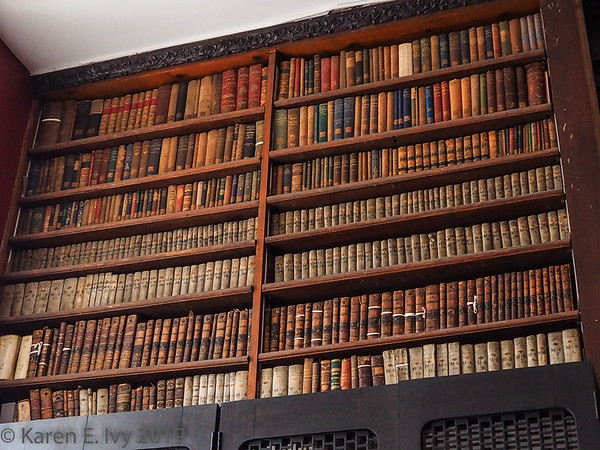 I don’t think I saw a shelf with any space on it, anywhere. There are spiral metal stairs between the gallery levels, and the individual galleries have ladders to get to the upper shelves.

Since I did the honors thesis for my B.A. in English on Jonathan Swift, I was delighted to see the bust of him in the Long Room:

After Queen Anne ascended the throne of England and took a dislike to his writings; his English supporters got him appointed dean of St. Patrick’s Cathedral in Dublin and he spent the rest of his life there.

The Dublin gallery has a photo of the Berkeley Library, which I wasn’t expecting (having attended U.C. Berkeley); the modern building isn’t very interesting but there’s a very odd sculpture in front of it, which I did photograph.  Our entire stay at Trinity lasted only until about midday, when we had the rest of the afternoon to ourselves.  We decided to go to the National Museum of Ireland – Archaeology, and found a lunch at Buswell’s Hotel, right across Kildare street from the museum.  The Irish like large servings as much as Americans do, including lots of potatoes.

The National Museum of Ireland – Archaeology was fascinating.  They had an exhibit about the Battle of Clontarf (1014), in which Brian Boru (High King of Ireland) was killed.  I found the exhibit confusing – it mostly said that no one knows much about the battle -but the Wikipedia article I’ve linked is much clearer.  What I did learn is that Ireland at that time was much more full of Vikings than I had known.  They traded there; some of them lived there, and were politically connected to some of the lesser Irish rulers, particularly Leinster.

But I was really interested in the items retrieved from the peat bogs, including bog bodies.  If you’re easily horrified you may want to skip these, these are human bodies  preserved in the peat bogs, and found and analyzed by archaeologists.  For 2 of the bodies I copied the explanatory panels next to them, you can go to the gallery to look if you like.  You may have to enlarge the panels to read them.  For now, here’s Clonycavan Man (his lower half didn’t survive the encounter with a peat harvesting machine where he was found):

They determined that his hair had been treated with hair gel when he was alive; here is a reconstruction of what he may have looked like, from bones and preserved hair.  I photographed the reconstruction below in the museum.  If you Google him, you’ll find a different looking reconstruction in Wikipedia.  The museum didn’t have an explanatory panel for him (or if they did, I missed it), but Wikipedia is pretty complete.

There were other things than bog bodies, of course.  I was particularly interested in this delicate little gold boat and cup.  This was part of the Broighter Hoard, a hoard of gold artefacts from the Iron Age of the 1st century BC that were found in 1896 by Tom Nicholl and James Morrow on farmland near Limavady, in the north of Ireland. It was much more famous than I realized!

Broighter gold boat with oars and rudder, plus gold cup

And I must show you the Ardagh Chalice, one of the great treasures of the early Irish church.

We left the museum in the late afternoon to return to the ship.  I had an acute case of museum feet.  Our entertainment in the evening was a very good Irish pub band, and a group of Irish dancers.  From where I sat I couldn’t see the dancers’ feet – unfortunate, because what their feet are doing is the most interesting thing about them.  Then to bed, and tomorrow, on to Wales.

This entry was posted in Personal, Vacations and tagged Book of Kells, Celtic Lands Cruise 2019, Dublin, Ireland. Bookmark the permalink.