The gallery with photos of this day is Touring Wales.  There are many more photos of Bodnant Garden than I’ve included here.

The sky was reasonably clear when the ship pulled into Holyhead harbor in Wales, but that was very early, and it didn’t last.

For most of the day our bus drove under overcast skies, although I don’t recall any rain.  Our initial destination was Bodnant Garden, a National Trust property.  We drove through some very rugged and rocky hills, although some areas were clearly used for farming.  I saw a similar field full of sheep but couldn’t get a clear photo from the bus – they came out as little white blurs.

Farming in the Welsh mountains

Like many big gardens in the U.K., Bodnant began as a family estate.  Here’s the front of the house:

As you look through the photo gallery, you may see plant photos labeled “Bodnant Garden.”  (“Gardens,” actually, but that’s an error I haven’t corrected!)  If there is no name on the plant, neither I nor my husband the amateur botanist could identify it.  If you recognize an unlabeled plant, please comment on the photo and tell me what it is!

The first place the tour took us was through the laburnum alley: 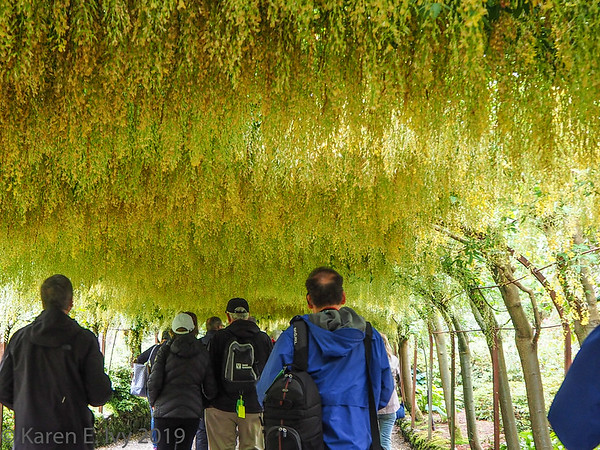 After that we walked through lots of garden, occasionally interrupted by an ornamental pool.  I liked the reflections in this one. 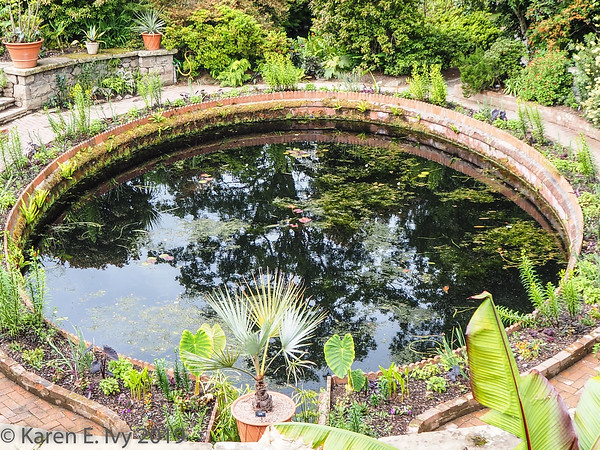 Shortly, we came on a much larger ornamental pool with a sculpture: 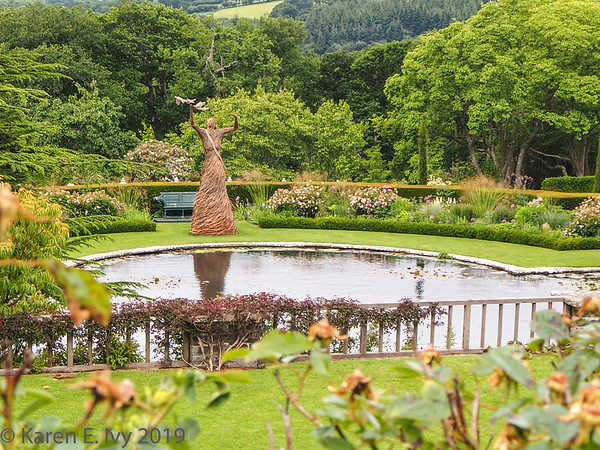 The willow sculpture is called Unbind the Wing, and was created in 2018 by Trevor Leat, to celebrate women’s suffrage.  The linked article contains more detail about how the sculpture was built and how it’s supported; it’s 18 feet high.

In the gallery you’ll see photos of several Very Old Trees, including one the family kids used to climb on:

Bodnant Garden, Very Old Tree, the kids in the family used to climb on it

The building below was a pin mill – yes, a factory where workers made pins out of lengths of wire.  On the estate.  Actually, it wasn’t originally a pin mill – and it wasn’t originally on the estate at all.  It was built around 1730 as a lodge or garden house, at an estate called Woodchester in Gloucestershire.  It was later used as a pin mill, and later still to store hides for a tannery.  In the late 1930s the then lord of Bodnant, Henry McLaren, 2nd Baron Aberconway, bought the derelict building and had it taken down, moved to its current site and reassembled, with some repairs and alterations.

Since Bodnant is actively managed, occasionally they get new flower beds.  This is a new ornamental perennial garden.  You can see that the plants are all very young. 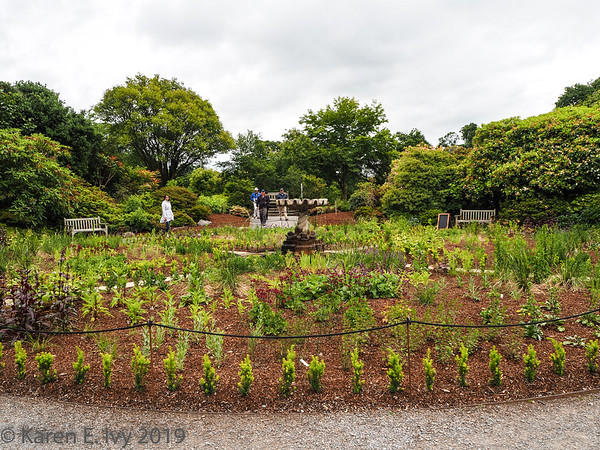 We spent a lot of time in the bus that day.  From Bodnant Garden we went next to Llandudno, on the coast, where we were scheduled to hear a performance by a Welsh male chorus in St. John’s Church, and have a group lunch in a local hotel.  The chorus’ voices were all very good but they sang with almost no emotion, even doing Bridge over Troubled Water.  They were also, frankly, all older men except for the young female conductor.  They ended with an American medley – Dixie, Battle Hymn of the Republic, and All My Troubles Lord.  Which was an Elvis Presley favorite.  He did it with more emotion.  (If I sound critical it’s because I’m a choral singer myself.)  The church was interesting because of a window memorializing John Wesley.

After the performance we all adjourned to the St. George Hotel for a huge lunch, which I recall as pretty good for a group that large.  And after lunch, back in the bus, and on to Caernaerfon, which is usually Anglicized as Caernaervon so that’s what I’ll do.  Caernaervon Castle was one of several castles begun by Edward I of England, during his 13th century attempts to bring Wales firmly under control of the English throne.  I don’t think it was ever really finished; you built castles a piece at a time, when you had the money; and Edward I was chronically short of money. Here’s the castle today, an exterior view from across the street (please excuse the traffic signs).

Under English rule, Caernaerfon, and this castle, were effectively the capital of north Wales.  I’m flabbergasted to read in Wikipedia that the normal garrison of this castle, which is much bigger than it looks here, was about 30 men.  I was never far enough away to get a photo of the whole castle, but this more distant photo, from Wikipedia, will give you a much better idea of the size:

The next 2 photos are the two ends of the castle interior, taken from the middle:

Caernaervon Castle, upper ward; Black Tower is on the right, North-East Tower on the left 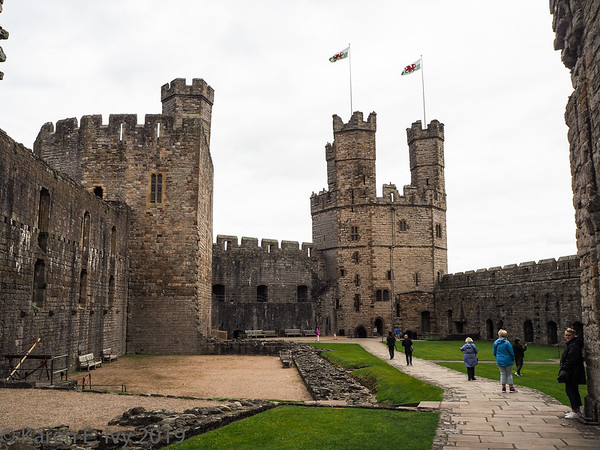 I enjoyed poking around the castle, castles always fascinate me.  I found I’d developed a fear of the internal spiral staircases.  They’re quite steep, with a rope on the inner wall, nothing else to hang onto; scary.  I had been convinced that spiral staircases (which were part of the castle defenses) always rotated counterclockwise, so a right-handed swordsman coming down the stairs would have his sword hand free to swing against a right-handed swordsman coming up the stairs.  The guy coming up would have his right hand against the inner wall and much less room to swing his sword.  In this castle I learned I was wrong – it has both kinds.  In the Well Tower it was counterclockwise; in (I think) the King’s Tower it was clockwise.  Maybe the king was left-handed?  I don’t know.  This stop got me really interested in Edward I; if you’re interested you could try the very well written account of his life which I found when I got home:  A Great and Terrible King:  Edward I and the Forging of Britain.

Having managed to climb the stair all the way up to the ramparts, I got some photos of the area from the castle walls, here’s a sample.  There are more in the gallery.

From the ramparts of Caernaervon Castle

After we left the castle, it was back on the bus, and back to the ship to eat and sleep.