Leaving Wales, we approached one of the spots that made me decide to take the cruise:  Iona.  Iona is a tiny island (about 1 mile wide by 4 miles long) off the west coast of Scotland, with a resident population of about 200 people, according to our guide.  Here it is as we approached it.  The photo gallery for this post is Iona.

Iona doesn’t have a port in the normal sense.  Its landing facility is a concrete ramp slanting up out of the water, used for the inter-island ferry, and for tenders from cruise ships like Le Boréal.   Here are some of us in the tender, heading for shore.

I was interested in Iona because of Iona Abbey, founded by St. Columba in 563 A.D., the first Christian establishment in Scotland. Most of the details on the Abbey in this post have come from the excellent Wikipedia article on the Abbey and its history, which I’ve linked above.

I got curious as to why Columba, who was Irish, founded a church on a remote island off Scotland.  I’ve found a couple of explanations, which don’t entirely match, but the one I like came from a site called Undiscovered Scotland:

Columba was educated at the monastic school of Moville under St Finnian, who had himself studied at St Ninian’s “Magnum Monasterium” on the shores of Galloway. In 560 a dispute arose over a copy Columba had made of St. Finnian’s book of psalms. The result was Columba’s instigation of a rebellion by the Clan Neill against King Diarmait of Ireland. This culminated in the Battle of Cooldrevny in 561, at which three thousand men were killed.

Following the battle, Columba’s confessor, St Molaise, set him the penance of leaving Ireland and preaching the Gospel in order to convert as many to Christianity as had been killed at Cooldrevny: and never again to look upon his native land.

In 563 Columba and 12 companions left Ireland, arriving first at what is today Southend, on the southern tip of Kintyre. This, though, was still within sight of Ireland, so they travelled further north, landing on Iona on 12 May 563. The island was granted to Columba for the establishment of a monastery by King Conall of a distant relative.

According to the other biography, at Historic UK, one of the features of Iona is called called “The Hill with its back to Ireland”.  I don’t know which hill that is, our guide didn’t mention it.

The Abbey has been heavily restored over the centuries but it still stands after 1,457 years.  As an international pilgrimage site, our guide told us it attracts something like 140,000 annual visitors, all of whom must come by sea or by air.  Here’s the landing, with a partial picture of what I believe is the main settlement on the island.  The town is called Baile Mòr (no, I don’t know how to pronounce it) but also known locally as “the Village.”

We came ashore and turned right (which Wikipedia says is north) to walk to the Abbey.  It isn’t a long walk, but we kept stopping to look at things, like the ruins of a 13th century nunnery: 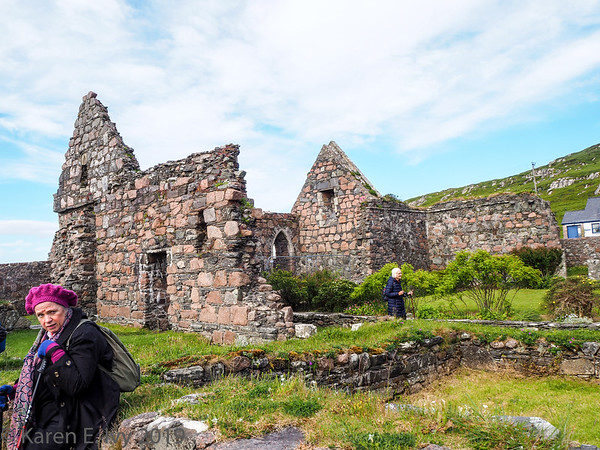 Like every other monastic organization, the nunnery was dissolved after the Scottish Reformation and reduced to ruin.  We got our first look at the Abbey shortly after leaving the nunnery.

You can see that the road is not set up for heavy automobile traffic.  The first “Celtic cross” we saw was MacLean’s Cross.  Nobody told us who MacLean was, but Wikipedia says the cross dates to the 1400s (nearly 1,000 years after the founding of the abbey), and stands where the road from the modern pier meets the Street of the Dead (picture to follow). 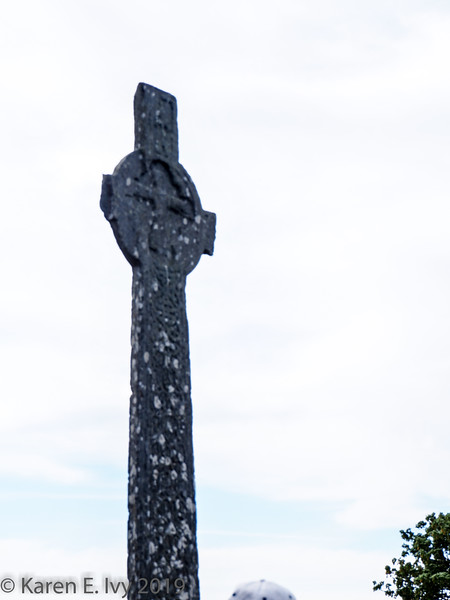 Iona also has an active parish church; given the size of the congregation it’s much smaller than the Abbey.

Here’s the Street of the Dead – it was a medieval route from the monks’ landing at Martyrs’ Bay to the graveyard.  Martyr’s Bay is now the name of a hotel, but the actual bay is just south of Baile Mòr (The Village).

Street of the Dead, Iona 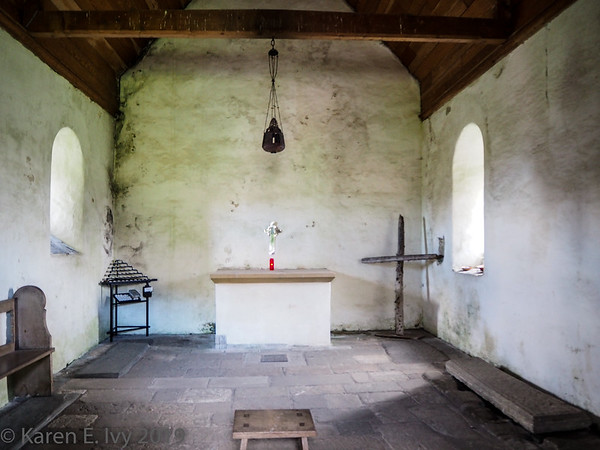 The only decoration in the chapel is this tomb recess.  There’s no indication of who was buried there.

Across the road from St. Oran’s and the graveyard, we find St. Columba’s Mound, where our guide told us he went to meditate and pray.  An early abbot described a building on the mound, of which nothing is left but some charred wood and a socket to hold a cross.

Here’s a closer shot of the Abbey.  This is, of course, the Abbey as it was restored in the 1930s by the founders of the Iona Community.  The original Celtic 6th century buildings were probably either wattle and timber or wood and thatch.  It is believed the original wooden chapel was replaced by stone around 800 AD.  The abbey was rebuilt as a Benedictine house in the early 13th century (around 1204) and substantially expanded in the 15th century, but abandoned, as I said above, after the Scottish Reformation in the 16th century.

Here is the nave.  The Iona gallery has more photos of the interior, including a full shot of the modern font (the square box at lower left front).

An abbey, of course, has to have a cloister for the monks.  The cloister at the restored abbey is decorated by a very modern sculpture:

Some of the side chapels also have very modern decorations:

And you can’t have an abbey church without a tomb or two – this is the memorial tomb sculpture of the 8th Duke of Argyll, who donated the ruined Abbey and Nunnery sites to the Iona Cathedral Trust in 1899.  It’s a very medieval sculpture, complete with his coronet at his feet, for a man who died in 1900.

After touring the Abbey, there’s frankly not much else to do on Iona, and our day wasn’t done yet, so we walked back to The Village and took the local ferry to the Isle of Mull, our next stop.  But that’s another post.  Here’s a farewell shot of the Abbey from the ferry, you can see how close it is to the edge of the island.