The Isle of Mull

As I said in my last post, our trip to Iona ended with a ferry ride to the Isle of Mull, where the tour company had taken the bus we didn’t use on Iona.  In fact, the cruise instructions say that we anchored off the Isle of Mull while we were touring Iona.  The photos for this article are in the gallery Isle of Mull.

Here’s the Isle of Mull.  This isn’t the harbor where the ferry delivered us, which is no more complicated than the one on Iona.  This is a beach next to the harbor.

Isle of Mull, near the harbor

I do want to share the first thing I saw as we looked around Fionnphort (pronounced fin-a-fort; I will never understand Gaelic pronunciation!), the town where the ferry from Iona lands.  It was this stout fellow:

Sheep, watching us on the Isle of Mull

Yes, we were still in Fionnphort, and so was the sheep.  We all loaded into the buses (I think we had 3 buses) and drove off across the Isle of Mull, heading for Duart Castle, our reason for coming to this place.

There are several photos I won’t share here because they all look very similar.  They’re all pretty, and the others are in the Isle of Mull gallery.  Here are a couple of samples.  These two were taken about a minute apart, so I assume that the sheep belong to the house, but I could be wrong.  The terrain looks similar in both, though.

Here’s one more example and then I’ll explain. 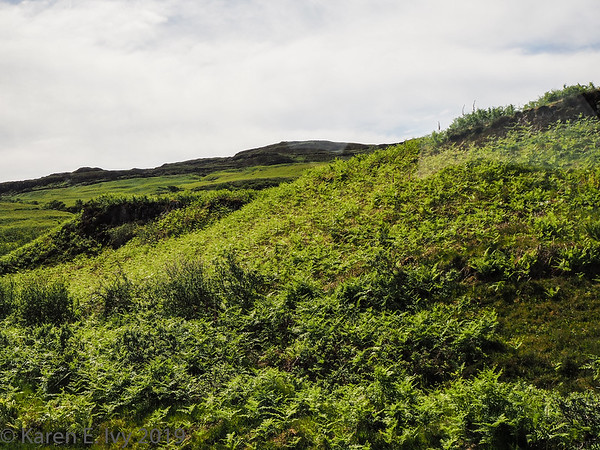 There’s very little on the Isle of Mull (I never heard anyone just call it “Mull”) except the occasional isolated house and the occasional herd of sheep.  If you look at the gallery, you’ll see photos of 4 houses between Fionnphort and Duart Castle, and that’s really all I saw in the hour and 45 minutes or so it took us to drive to the Castle.  It was so noticeable that I mentioned it to our guide, a very nice youngish Scot (in a kilt, no less), whom I’ll call Alex, because I can’t recall his name.  He looked at me and said, “The Clearances,” and I said, “Oh,” because I understood.

If you’re not a student of the history of the U.K., that may make no sense, so let me explain.  The Highland Clearances (thank you, Wikipedia, which has this in much greater detail) began around 1750 and continued into the 19th century.  Basically, before the clearances, land in the Highlands belonged to the clan chiefs or lairds, and if you were a member of a clan, you had an “inalienable right” to rent land in the clan territory, called a croft.  I put that in quotes because it was not a feature of Scottish law; it was a custom.  People who did this were called crofters and they paid a rent to their laird on a house with a small plot of arable land and access to the common pasturage.  Crofting was not an efficient or especially productive method of agriculture.

In the early 18th century, the lairds as a group had accumulated substantial debts and some of them were looking at bankruptcy.  After 1750 they slowly began to think of themselves more as commercial landlords than feudal lairds, and they began to replace groups of subsistence farmers on their lands by enclosing the open plots occupied by the crofts into larger areas which could be managed by a single tenant for a much larger rent.  The displaced crofters were sometimes moved to “crofting communities,” where they were expected to do something that wasn’t farming – fishing, quarrying, or harvesting kelp. They resented this.  Some of the landlords just kicked crofters out, some tried to help them.

In the early 19th century, the crofting communities became overcrowded, as the population was increasing steadily.  The lairds then tried to clear out the crofting communities by offering “assisted passages” – they paid the crofters to emigrate to somewhere else, possibly India, the new United States, Australia, or somewhere else in what was then the British Empire.  Assisted passage wasn’t a choice – people offered assisted passage essentially had to emigrate, whether they wanted to or not.  If you ever wondered why the U.S. East Coast area has so many people of Scottish ancestry, this is probably at least part of the reason.

And that’s a major reason so few people live on the Isle of Mull – the crofters who lived there in the early 18th century were driven out by enclosures in the Clearances, probably by the laird of Clan MacLean, who lived in Duart Castle and ruled that area.  End of history lesson, but I’d heard of this and never known the details, so I put it in.

We got to Duart Castle at just about noon, which startled me when I checked.  I had forgotten that we arrived at Iona at eight o’clock in the morning and left just before ten!  I don’t usually do anything that early.  But here we were at noon at Duart Castle. One of the buildings below the castle contained a little lunch facility, not quite a restaurant, where we all ate pre-packed lunches.

The castle, like most buildings dating to the 13th century, was undergoing some renovation:

The location, on the Sound of Mull, between Mull and the Scottish mainland, is absolutely stunning. The Sound of Mull is part of the Atlantic Ocean.  What I really recall is the wind.  My diary says that it was “blowing like mad” all day, it was uncomfortable to stand outdoors in it for any length of time.  This is more or less the front yard:

Strait by Duart Castle, off Isle of Mull

Lest you doubt that it was a military installation, it also had defenses right out front.  Not, maybe, the latest hardware.

Cannon in front of Duart Castle

Here’s the inner courtyard.  Given the wind that was blowing when we were there, I see why they needed this nice enclosed space.

The owners, I believe, still live in the place, but allow regular tours.  I don’t recall that we met any of the family on our tour.

The Great Hall was probably used for large dinners and other entertaining.  It’s now used as a historical display area. 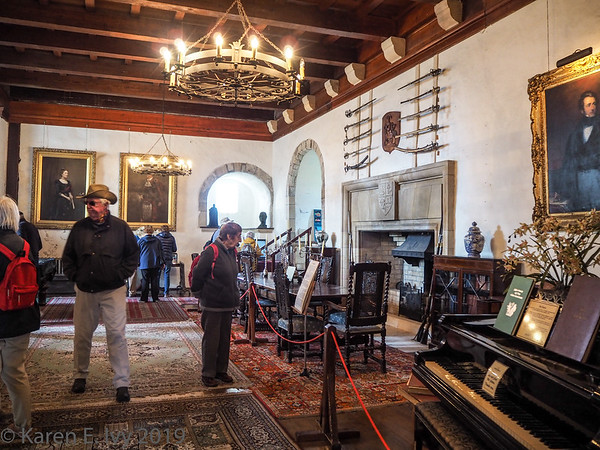 They also include photos of the state of the Castle in 1910, before the MacLean family repurchased it.  From Wikipedia:

The kitchen we saw undoubtedly dates from the 1911-12 remodel.  I’m guessing there’s a more modern one in the owner’s suite.  I can’t imagine they still cook on this stove.

Ditto the display bathroom – this definitely looks like 1912.  Again, I suspect the one in the owner’s suite is a little more advanced, but you never know.  At least on this one the toilet tank isn’t up at ceiling level, as older tanks were. 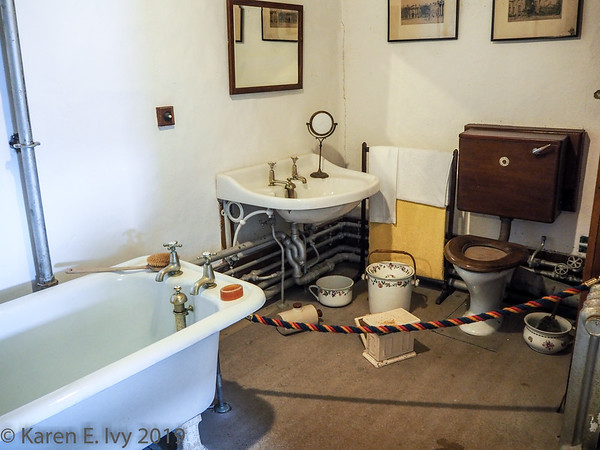 After touring the restored living quarters, I spent some time wandering around the ramparts, partly shielded from the wind.  I took a number of photos from up there.  Here are some examples; there are more in the gallery.  The place where we ate lunch is in that little group of buildings. 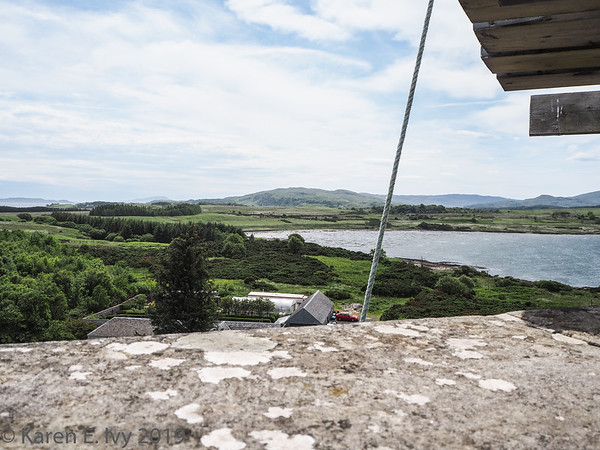 Duart Castle – view from the ramparts

I’m not sure if the photo below was a repair waiting for parts or an example of how the castle roof is constructed. 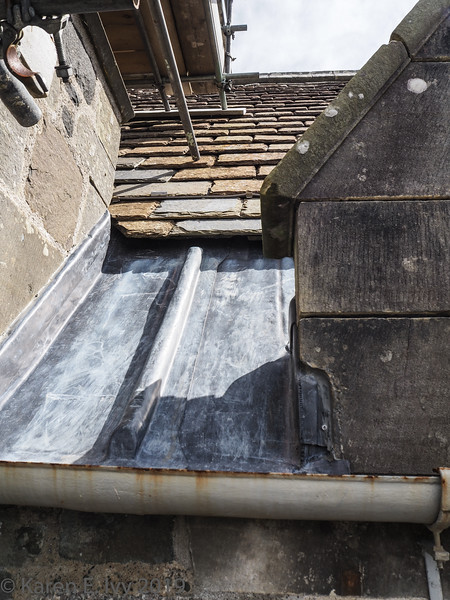 More views from the ramparts.  Those chimney pots are clear in this photo but there’s another shot that just shows the top few inches and looks very odd.

After lunch and the tour, we piled back into the buses and headed for Tobermory, where we would rejoin Le Boréal to go on to the Scottish mainland.  My diary says it took all afternoon.  The roads on the Isle of Mull are just comfortably wide enough for a cruise bus.  When we met a cruise bus coming the other way, we had an extended period of delicate maneuvering before we could pass, after which the entire bus applauded the driver.  We had similar issues with oncoming cars but those took much less time.  Other than the joys of traffic, all we had to look at was lovely green fields and occasional inlets and lochs.  I wondered what this place was but was never able to identify it firmly; it may be Torosay Castle. 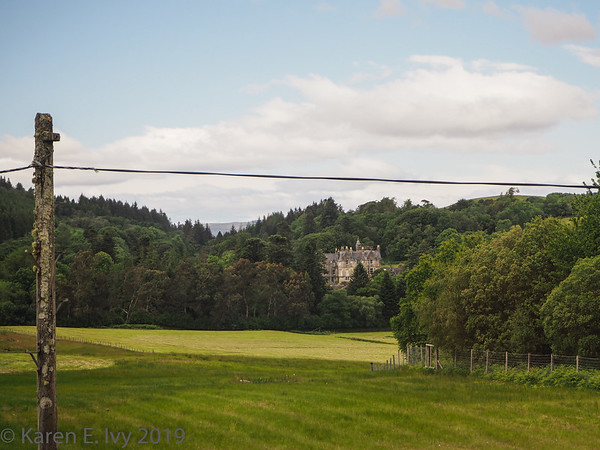 Torosay Castle (?) on the way to Tobermory

Tobermory is a lovely little harbor town.  This is what catches the eye first, the paint jobs are quite noticeable: 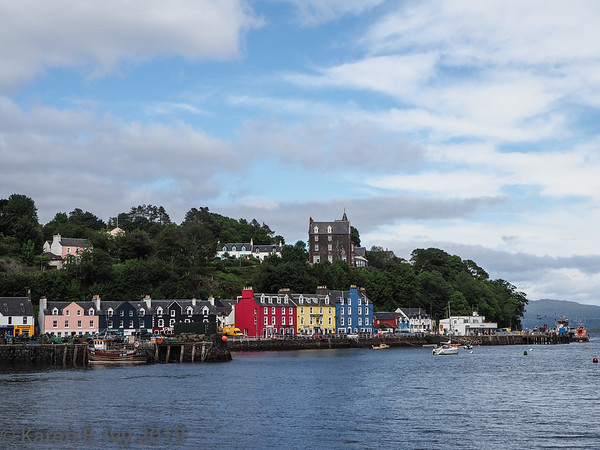 There’s another photo in the gallery with a little less vivid color scheme, but still quite charming.  Then back aboard the ship, where we had dinner, listened to a lecture, and went to bed.  I haven’t mentioned the lectures on board the ship, but for the most part they were excellent; I can only recall one that disappointed me.  But the lecture theater was freezing cold!

While we slept, Le Boréal put out for Fort William, in the Scottish Highlands.  But that’s the next post.