On the last day of the actual tour we made two stops, at Glen Coe and Glenfinnan.  The photos for this day are all in the gallery Scottish Highlands.

We came ashore in the morning at Fort William, after breakfast on the boat.  Fort William is in the Lochaber district, on the southwestern coast of Scotland.  A look at the small map on the linked Wikipedia article for Fort William shows you that it’s actually quite far inland, on a long but very narrow sea loch.  This is someone’s boat, anchored in the loch off the town.  I took the photo from the ship.

Boat on the sea loch by Fort William, Scotland

The first thing we did ashore, of course, was to climb into the buses for the drive to Glen Coe.  Out on the road leaving town, I was charmed to find us following the local bookmobile, or one of them:

Full disclosure:  in the first half of my career, I was a librarian.  That’s why bookmobiles attract me.

The Scottish highlands are amazingly beautiful.  Here’s the view from the bus, as we approach Glen Coe.  I liked the sign in the Glen Coe visitor center, which read, “In Scotland there’s no such thing as bad weather, only the wrong clothes.” 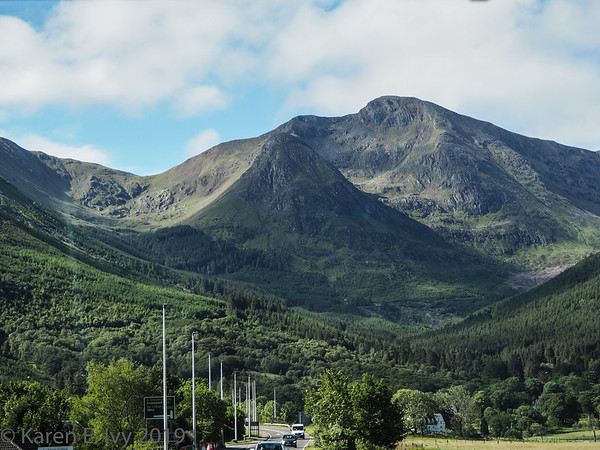 Entering Glen Coe, from the bus.

There are several other photos of Glen Coe in the gallery, but I think I like this one best: 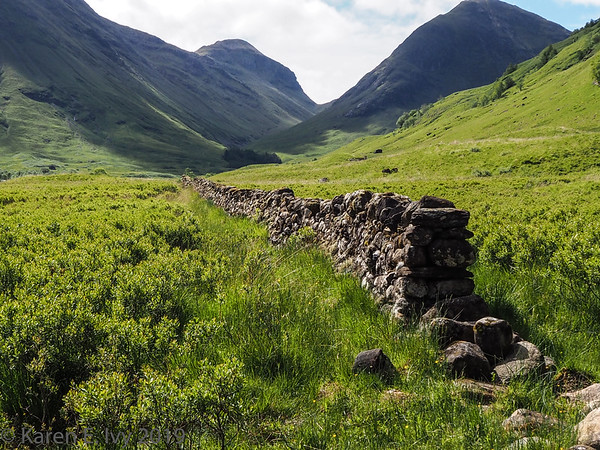 Glen Coe, from behind the visitors’ center

Since I don’t believe it’s currently inhabited (I mentioned the 18th century Highland Clearances in my article on the Isle of Mull), Glen Coe is interesting mainly for beautiful scenery and unhappy history.  Until this trip, I had heard an incorrect story of the Massacre of Glencoe:  namely that the Campbells had invited their enemies, the MacDonalds, to some kind of formal dinner, during which they murdered them.  The Wikipedia article which I linked above gives a story much closer to what I heard in the video performed at the Glen Coe visitors center.  In fact, Wikipedia is much more detailed than what I heard; but the story is very complicated and all tied up in 16th century Scottish and English politics.

In a very brief summary:  William and Mary took the British (and Scottish) throne in 1688-89 from King James II and VII, largely because William (a Dutch Protestant) had married James’ daughter Mary.  They ruled England and Scotland; the United Kingdom came along in 1707, under Queen Anne. In March 1690, King William offered the highland chieftains, who were largely independent of even the Scottish crown, cash payments if they would each swear personal allegiance to him before January 1, 1692.  William was engaged in the Nine Years War, but he also had the remnants of the Jacobite Rising of 1689 simmering in the highlands, and he needed the resources for the continental war.  The chieftains agreed to this but put off doing it, and by December 1691 still hadn’t taken their oaths.

The chief of the Glen Coe MacDonalds, for whatever reason, put off taking the oath until December 30 and then went to the wrong place to do it.  He was sent on to the right place, but he took the oath after January 1.  And apparently the English crown decided to make an example of him.  Late in January 1692, a regiment of about 120 men, under the command of Robert Campbell, arrived in Glen Coe with orders for “free quarter.”  This was a standard order which meant that the soldiers would move in with the residents of Glen Coe, live in their houses, and eat their food.  In early February, the commander got orders to kill everyone in Glen Coe; and he carried them out, killing somewhere around 30 people.

Seriously, if this interests you, read the Wikipedia article, which is very detailed.  The video I saw in Glen Coe presented the massacre as a personal attack, and a massive violation of Highland hospitality.  It appears to be the latter, but since Robert Campbell’s niece was married to the chief of the Glen Coe MacDonalds (whose name was apparently Maclain), I’m inclined to think it was more political than personal.

As we went along to GlenFinnan, we passed a very elegant church in Ballachulish:

GlenFinnan is not a very complicated site.  It’s in a very beautiful valley, full of Loch Shiel. Facing the lake is the GlenFinnan Monument, a stone tower with a statue of Charles Edward Stuart, also known as the Young Pretender.  Apart from some beautiful walking trails and a restaurant where we had lunch, that’s about it.

This is where Bonnie Prince Charlie, the last viable Stuart pretender to the British throne, raised the standard for The ’45 (yes, it’s called that), his failed attempt to retake the throne from what was then the Hanoverian dynasty.  I was a little startled when I realized that the monument had identical signs in English and Latin:

But the very nice docent in the tartan dress explained that the Prince used Latin to talk to his supporters, because he didn’t speak Gaelic!  He was raised in Italy and spoke 7 languages but not that one; while in 18th century Scotland, the highland chieftains – who were considered gentlemen and were educated – generally spoke Latin.

I’ve read enough stories about the Glorious Rebellion that I’m convinced the Old Pretender, James Francis Edward Stuart (Prince Charles’ father) was in fact the legitimate heir to the British throne, under the inheritance rules that applied to almost every noble family in Britain.  The English Parliament deposed James II and VII in 1688 because he was Catholic (he went into exile), and invited the Protestant Dutch William III to the throne.   William was married to King James II’s daughter, Princess Mary, but by normal rules of noble inheritance the throne would never have gone to the king’s son-in-law.  Instead the king’s son became the Old Pretender, and his son Charles became the Young Pretender when his father named him Prince Regent in 1743.  I guess that makes me a Jacobite, but it won’t get me thrown in jail today.  It once could have, if I’d been a man.

The Monument was put up in 1815, by which time the Hanoverians no longer considered the Jacobite cause a political threat.  You can climb the Monument to look at the statue, but I chose not to – you can see from this photo how tall it is, and I understand you have to climb an interior stairway.  You can also see the clump of people who did climb the stairs, and a few more waiting to go up. 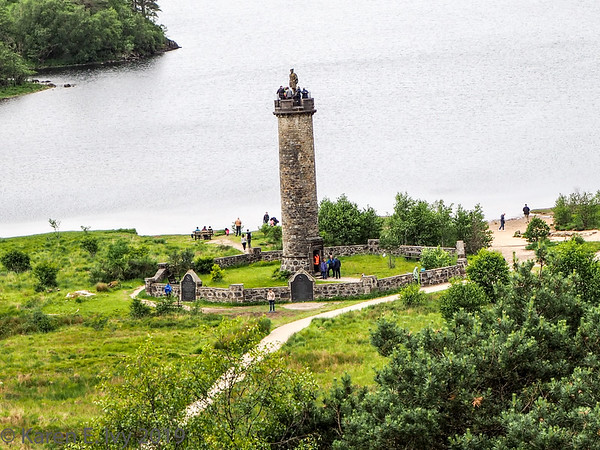 Because of the Monument’s height (18 meters or just under 60 feet) it took several tries to get a decent photo of the statue; this was the best I could do, but you’ll probably have to go look at it in the gallery and enlarge it to get the best detail.

One other item in this area gets attention from visitors – the Glenfinnan Viaduct. This is a railway bridge which was built at the end of the 19th century.  It’s unusual in that it’s built of mass concrete instead of reinforced concrete.  It’s notable because it appeared in four Harry Potter movies (as well as several other films).

You wouldn’t think people would willingly walk on a railroad bridge that long, but apparently after the appearances in the Harry Potter films, they had a series of near misses that caused the British Transport Police to warn fans not to do that.

Since my husband and I paid for the post-tour extension (tours of Glasgow and Edinburgh) there will be a couple of more posts in this series.