The day after we toured Glencoe and Glenfinnan (see The Scottish Highlands post), those of us who paid for the tour extension left the boat, with luggage, and were bused to Glasgow, for the first part of the extension. The photos are in the gallery Glasgow.

When we got out of the bus, the first thing we passed was the oldest house in Glasgow – called Provand’s Lordship.  It is a 14th century house, originally built as part of a hospital.  It’s one of 4 surviving medieval buildings in Glasgow and is currently a house museum.  I didn’t go in and probably should have, but our time in Glasgow was limited.  Here it is:

We were too close to the house to get a shot of the whole width, this is about half of it.  There’s a photo of the other half in the Glasgow gallery.  The other reason I didn’t go there is that the main attraction in this district is the Glasgow Cathedral – which is now a Presbyterian church.  It is the oldest cathedral in mainland Scotland and the oldest building in Glasgow.  Here it is:

Yes, I couldn’t get all of the spire.  St. Mungo is the patron saint of Glasgow, he is reported to have built his church on this site, and his tomb is in the lower crypt.  With the lenses I had, and the time I had, I never got far enough away from the cathedral to get a full photo of it.  This is probably the best picture I got:

There are several other external photos of the cathedral in the gallery.  We did tour the inside of the cathedral, and I took a number of photos, of which these are probably the best.  Do look at the gallery for the rest of them.

I’m not sure this is the altar; I remember several throughout the building.

After touring the cathedral, I stopped in to the St. Mungo Museum of Religious Life and Art, which is nearby.  Here’s the entry court, you can see the cathedral behind it:

I only took 2 photos in the St. Mungo Museum but they were unusual – here’s the chapungu bird: 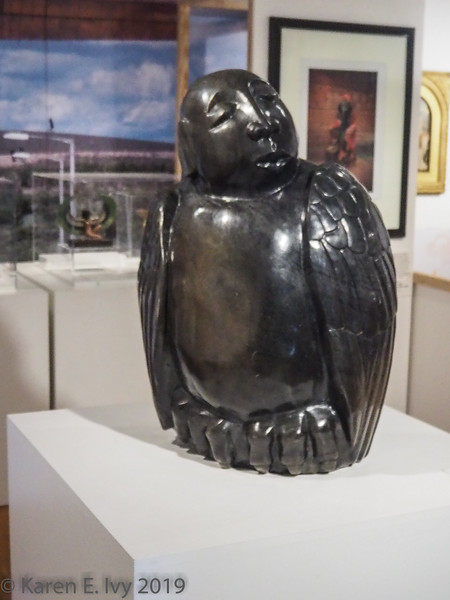 And here’s the explanation:

Our next stop after the Cathedral and the St. Mungo museum was the Kelvingrove Museum.  This is a huge ornamental building, completely refurbished from 2003-2006, which contains everything from a pair of fighting male deer (taxidermy specimens) and the skeleton of an Irish elk (I labeled it “Irish moose” but I think it was an Irish elk), to original paintings by Dali and Van Gogh.  And the skeleton of a pterodactyl, hung from the ceiling.

The museum has a huge pipe organ built in:

One section has a taxidermied pair of elephants (there’s a photo of the pair in the gallery; the adult is called Sir Roger) underneath a hanging Spitfire fighter jet. 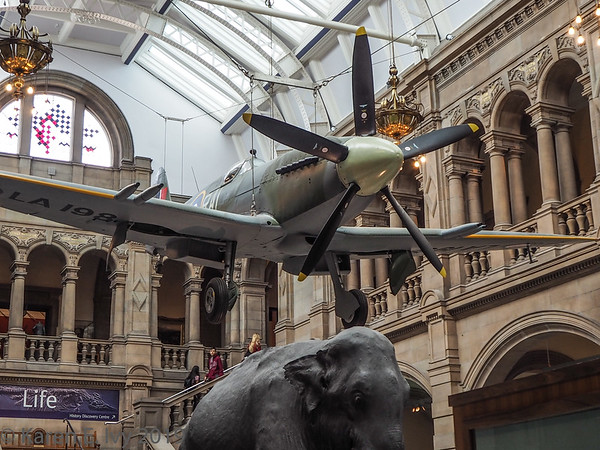 The gallery has more photos of the very ornate museum interior, plus some photos of Glasgow streets.  Do go look at it, but this is about all for Glasgow, because we spent the rest of the day driving to Edinburgh.  But that’s another post.