Having spent much of yesterday on a bus traveling from our last port to Glasgow, and then on to Edinburgh, we now spent this day riding around Edinburgh and vicinity on a bus.

I took some photos of Edinburgh streets as we drove around in the bus.  You’ll find all the photos from this day in the gallery Edinburgh, feel free to look through it. Here is a street view, they all look pretty much like this.  The land around Edinburgh is gorgeous (you’ll see some photos).  The town is built very much like this – talk about dense housing, much of which was built in the 18th and 19th centuries.  It is not friendly to the mobility impaired, but then, neither is most of old Europe. 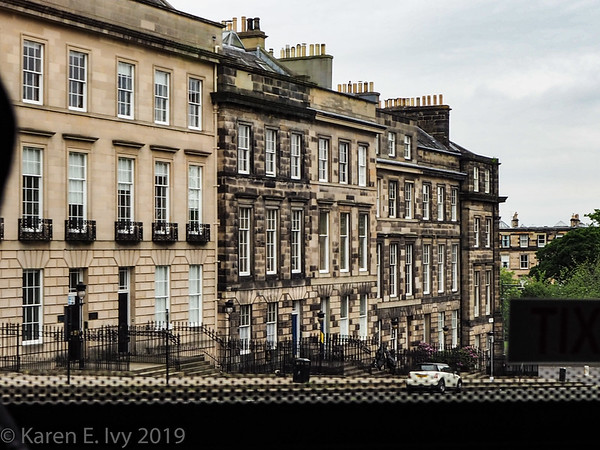 Edinburgh street, from the bus.

I don’t know what this building is, but it has the lion and the unicorn on the front, in gold relief.  Since this is the official Royal Crest of the United Kingdom, it must be a government something, but I was on the bus and never found out. 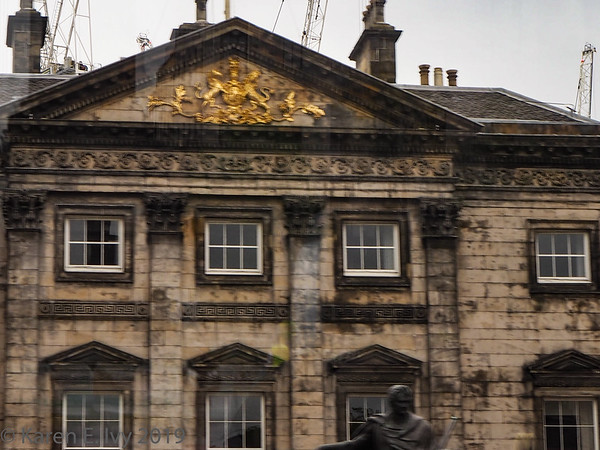 Architectural detail, Edinburgh, from the bus

The trouble with photogaphy from a bus is that you can never get the whole thing, especially if the “thing” is Edinburgh Cathedral.  Sorry about the bus seat.

Edinburgh Cathedral, from the bus

The bus took us out of the town center to drive through Holyrood Park.  The center of Holyrood Park is Holyrood Palace.  As the Wikipedia link will tell you, this is now the official residence of the British monarch in Scotland; the queen comes to stay a couple of times a year.  It’s been the principal royal residence in Scotland since the 16th century, but the name comes from a 12th century Augustinian monastery, Holyrood Abbey.

“Rood” is an old name for a crucifix.  Saint Margaret of Scotland (ca. 1045 – 1093), the mother of King David of Scotland (ca. 1084 – 1153) who founded the abbey, was believed to own a relic of the True Cross (yes, that cross), known as the Holy Rood or Black Rood, hence the name of the abbey and eventually the royal palace.  Here’s one end of Holyrood Palace, from the bus.  The Wikipedia article has a full photograph of the building (this is one end) but we didn’t stop.

There are some lovely photographs of Holyrood Park in the gallery.  Here’s one showing an iron age fortification which will give you an idea of the park.  The park is open to the public.

We drove around the park quite a bit and stopped several times to take photos of the city from the park.  Here are couple, there are more in the gallery.

At about this time in the tour, I discovered I’d done a stupid thing.  I hadn’t charged the spare battery for my Olympus E-M10 Mark II camera.  So from this point on, all the photos were taken with my phone, a Samsung Galaxy S10.  (The photo thinks it’s a motorola XT1650, which is odd.)  I was surprised at how good the photos are but I still prefer my Olympus.  For one thing, I find it hard to read the phone screen in bright daylight.

My notes say we stopped at the Royal Scottish Museum, but on Google, “Royal Scottish Museum” brings up 3 different institutions, 2 of which are associated with Scottish military regiments.  We were at the National Museum of Scotland.  They only gave us an hour to tour it, but I got a few photos.  I think the one that startled me most was Dolly – remember Dolly, the cloned sheep?  Here she is.

They also have a statue of James Watt, who invented the steam engine.

We spent some time on the roof, which has fabulous views of the city. There are about 5 photos in the gallery, of which I will share one here – I’m reasonably sure that’s Edinburgh Castle on its hill (we’ll be there later) and the spire of the Cathedral – so, both ends of the Royal Mile.  Yes, the National Museum has grass and flowers growing on its roof.

Edinburgh Castle and Cathedral, from the National Museum of Scotland

I took a couple of photos of looms in the museum, but what I found really interesting was the reconstruction of a wattle-and-daub house.  I’ve read about these all my life and had no idea what they might look like.  Well, they look like this. 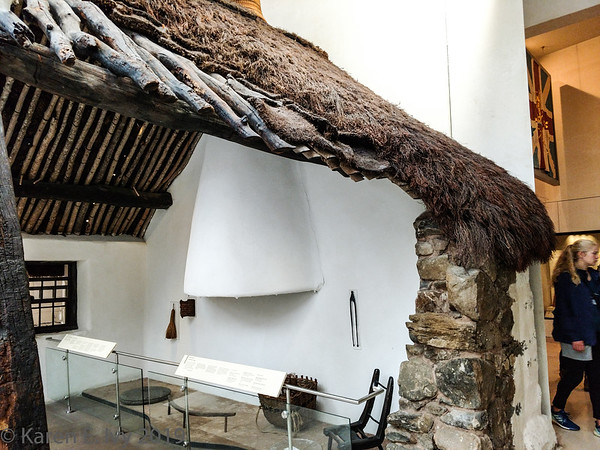 After the museum, we drove around Edinburgh some more and ended up at Edinburgh Castle, from which we walked back to the hotel.  I’ve just decided that the Castle needs its own blog post, so I’ll stop here for the moment.

This entry was posted in Vacations and tagged Celtic Lands Cruise 2019, Edinburgh, Scotland. Bookmark the permalink.