As I promised in the last post, this one is dedicated to Edinburgh Castle.  The photos are all in the Edinburgh gallery; I won’t be posting all of them, so feel free to go look.  Here is the first photo of the Castle, the entrance (a little fuzzy, sorry – my phone doesn’t handle auto-focus as well as I’d like).  As you can see, there was a pretty fair crowd waiting to get in. 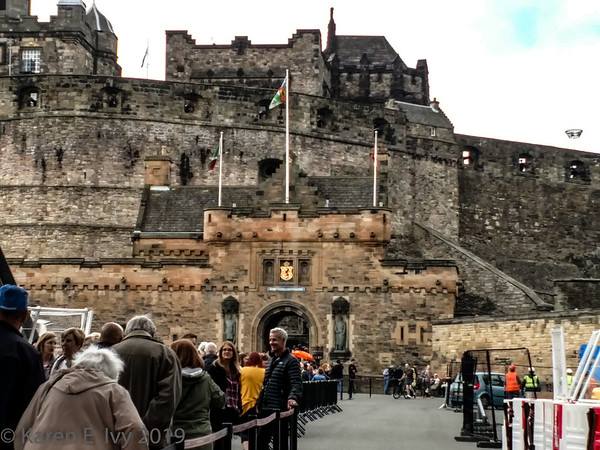 Here’s a better look at the entrance gate:

The Wikipedia article I linked above gives a pretty complete history of the site, including the fact that the hill it’s on (called Castle Rock) is the plug of an extinct (very extinct) volcano, a form of basalt called dolerite.  The site has been used at least since the Iron Age (1200 – 600 BC), and its use by the rulers of Scotland goes back to King David I of Scotland, in the 12th century.  Because the sides of the basalt rock are pretty much vertical except to the east, where softer land was deposited by glaciers passing over, the Castle Rock could only be approached from the east, which simplified defense.  The rest of Edinburgh is all to the east of Castle Rock, including the approach area called the Esplanade.

The castle was built out over multiple centuries, in some cases incorporating the rock it’s built on into the walls.  Wikipedia says the basalt of the rock is so hard it’s largely impermeable to water, which has caused problems getting water to the Upper Ward during drought or sieges, despite the 92 foot deep well they sank.

This is the Governor’s House, built in 1742.  Most of the architecture in the castle looked very similar.  The castle has, of course, been rebuilt multiple times over the centuries.

Speaking of defense, here is the Half Moon Battery, built in the late 16th century, which faces east along the Esplanade – the only way attackers could really approach.  The guns you see are 18-pounders made in 1810, during the Napoleonic Wars.  They replaced bronze guns, cast in the castle for James IV in about 1500, which were called the Seven Sisters.

And yes, the Castle had a portcullis gate, which could be dropped if it looked necessary.  This was taken from just inside the gate:

There is a royal palace inside the Castle, but I don’t seem to have taken any external photos of it; there’s one in the Wikipedia article.  If you compare that photo to the one shown below of the tower holding the Honours of Scotland, you’ll see where that tower fits into the whole palace.

I did take some photos of the Great Hall, the “chief place of assembly” in the castle.  Cromwell converted it to a barracks; in the 1790s it became a military hospital.  It was restored in 1897 and is occasionally used for ceremonial occasions.  Here are a couple of shots I did take, there are several more detail shots in the gallery:

And a display of weapons:

Weapons display in the Great Hall

The palace was, and since the Stone’s return in 1996 is again, the home of the Stone of Scone, on which Scottish monarchs were crowned.  It shares the Crown Room with the Honours of Scotland (the crown, the sceptre – yes, that’s the spelling – and the sword of state).  Here’s the building containing the Crown Room, home of the Honours of Scotland; we didn’t tour it.  You could spend several days looking at every site in the Castle; we had one.

Home of the Honours of Scotland, Edinburgh Castle

In addition to the palace, there are several other historical buildings in the area called Crown Square, or the Palace Yard.  The most notable is St. Margaret’s Chapel, the oldest building in the Castle:

This was built in the 12th century, and is one of the few buildings from that period surviving in any Scottish castle.  It was named after Queen Margaret, wife of King Malcolm III.  Their youngest son was King David I, who developed Edinburgh as a seat of royal power.  In the 14th century the chapel survived Robert the Bruce’s orders to destroy the castle’s defenses; it was converted to a gunpowder store in the 16th century when the present roof was put on.  It is now used again for religious services and weddings.  It is very small.  Yes, this is about all of it.

Here’s the stained glass window of Queen (now Saint) Margaret.  Notice how thick the walls are!

The other major building in the Palace Yard is the Scottish National War Museum, which we didn’t tour.

Like most castles, Edinburgh Castle had a village outside the gates, which eventually grew into the town; here are some of the buildings along the approach.  Edinburgh Castle is one end of the Royal Mile, the main thoroughfare of the Old Town in Edinburgh.  The other end is Holyrood Palace.  There’s a photo of Holyrood Palace in my last post, Finally, Edinburgh.  That post also has some other shots of Edinburgh streets, as does the gallery generally.

Medieval Scots would have recognized this activity just outside the Castle; there was usually a sort of pop-up business area around castle entrances.

Here’s a view of part of the Royal Mile:

Looking down the Royal Mile, Edinburgh

I was interested in a particular part of the Royal Mile, Boswell’s Court.  In the late 18th century, a Dr. Boswell lived in the tenement on this court.  His nephew, James Boswell, was the biographer of Dr. Samuel Johnson, the famous lexicographer.  Dr. Johnson and his colleague are reputed to have dined here.  The tenement on what is now called Boswell’s Court was built in the 17th century and has been considerably modernised.  It consists of 4 stories and an attic, with a common stairway.

The restaurant, The Witchery (see the sign), has been in business for 5 decades, although the area that’s now The Witchery was built in 1595 for an Edinburgh merchant.  The restaurant was named after “the hundreds of women and men burned at the stake as witches on Castlehill during the sixteenth and seventeenth centuries. It is reputed that more witches were put to death on Castlehill during the reign of James VI than anywhere else in Scotland.”  We didn’t dine there, but for lack of time; I just learned where the name came from while researching this post!  I think it might have given me pause – or maybe not!

Boswell’s Court, on the Royal Mile

You may have noticed that Edinburgh leaves very little spare room between the streets.  They do have ways of getting up and down the hill between buildings – this staircase even has a handrail, which I’m morally certain is a modern improvement. Look at the hollow in the middle of the stone steps! 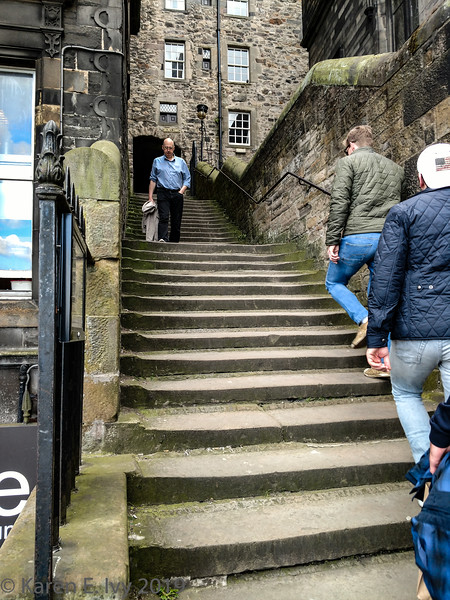 Edinburgh does have greenery amid all that stone architecture.  I mentioned Holyrood Park in my last post and gave some photos of the view from it.  Here’s another picture of it.

And here is a view of the Castle over the Princes Street Garden:

And that concludes my account of our Celtic Lands Cruise, the last major vacation we took before the pandemic!  I hope you’ve enjoyed these accounts as much as I’ve enjoyed researching and writing them.