I've decided to change my blog habits a bit, now that my personal site has a solid blogging platform.  I'll move the blogging reports of our vacations to this site, and leave Hedera's Corner for my political rants, which was its original purpose anyhow.  So this post is the next in the series tagged 2009 Vacation; the link will take you to the five earlier posts.

Yes, I know I'm three years behind in this. I've been busy, OK?  I still have to finish processing the photos for the trip to the Grand Canyon in 2010, too.  Digital cameras produce way more photos than I can easily deal with, given that I can't decide what to leave out.  I'm getting better at that.

To remind you, in 2009 we spent 7 days in New York City.  This post, and photo gallery, cover the morning we spent in Central Park.  My first surprise in Central Park was how rocky it was.  That is serious bedrock there.

Central Park has been written up by greater writers than I, so I'll just include some of the things I noticed and enjoyed.  We checked out Belvedere Castle, which is probably the most elegant weather station I'll ever see:

Belveder Castle is near Turtle Pond, one end of which is clear while the other end is almost solid duckweed.  While exploring the "castle" we found a starling sitting just above our heads: 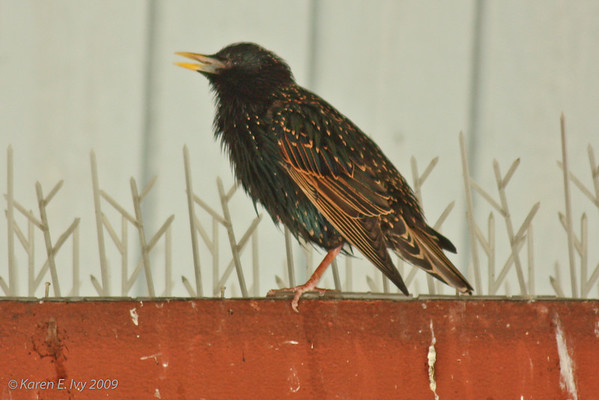 I love telephoto zoom lenses.  Starlings are noisy and messy, but they are pretty.  Strolling through the park, I noticed a squirrel and got a good closeup of him: 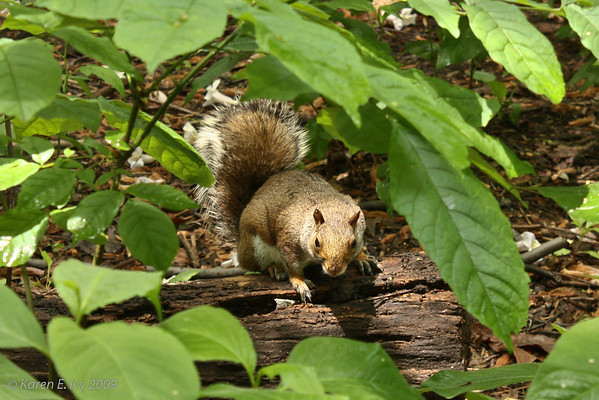 Near the Conservatory Water, we found the Alice in Wonderland statue, which I enjoyed quite as much as the children who were climbing on it.  The photo gallery has closeups of some of the figures.

I have no photos of the rest of the day.  We spent it at the Metropolitan Museum of Art, and they wouldn't let me take my camera in.  They also wouldn't let me check my camera with them – too much liability to let me check all that expensive glass.  They actually wanted me to carry my camera equipment, including a 70-300mm telephoto, around in a plastic bag while I toured the museum!  We took a cab back to our hotel, where I left the camera in the room, and then took another cab back.

You could spend months exploring the Met, of course, and we had one afternoon, which we spent in one of the galleries of Musical Instruments, examining the history of brass instruments (Jim used to play the tuba) and the  ancestry of the harpsichord and piano.  Absolutely fascinating, and gave me an advanced case of "museum feet"!